Has Ja’Marr Chase arrived? He’s passing the eye test, but do you know what details are feeding your conclusion. Dive into the week 3 tape with @FFB_Vern to identify nuances feeding Chase’s performance. 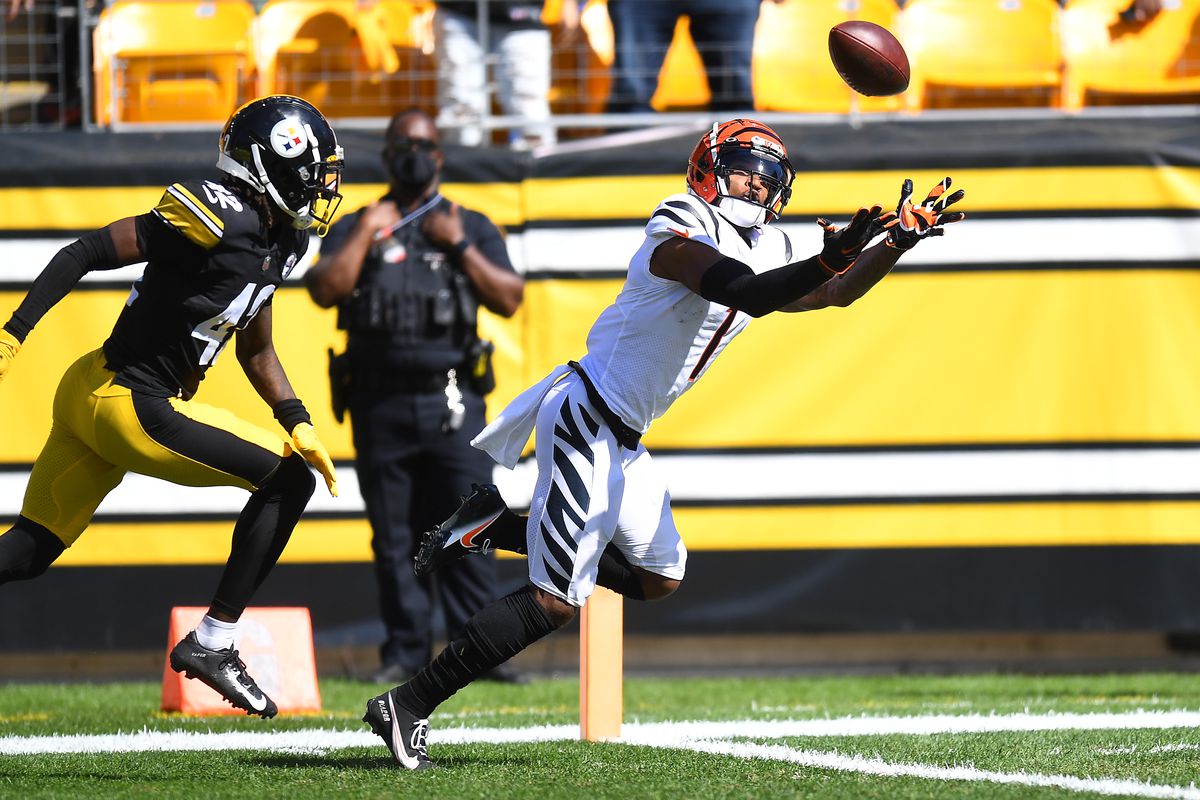 This week we will focus on one guy coming off the rotation: Ja’Marr Chase. Chase has shown us more than enough to solidify our confidence. Let’s see how the tape boasts of his translation.

Ja’Marr Chase still had to answer the following questions with his play:

Chase spent Week 3 being efficient from a fantasy perspective with a 4-65-2 stat line on 5 targets. This accounted for a 25% target share on standard passes. Some additional important context was the absence of Tee Higgins. No Higgins allows us to observe how Chase deals with a little more attention. One would have thought he would see a lot more double coverage with Higgins out, but they left him 1-on-1 most of the time. We can how much of a mistake this is on the play below.

While this play was Cover 2 Man, we see how Chase challenges the DBs who try to jam. The body control on display here is amazing. Simultaneously challenging Joe Haden’s leverage while adding a shoulder reduction and a rip is nice enough. The fact that he explodes from that into his route getting two yards of separation, is very good. As he enters his stem, the safety comes down over the top, but Chase’s break is in the perfect spot. I am confident that Chase is answering the questions on his release here, but let’s watch another rep.

We saw some good route running on the last play, and he is adding nuance as the season progresses. On this touchdown, we see some subtle route running details on display. Chase is facing Pierre, who is showing press, but he quickly retreats in bail technique before the snap. Pay close attention to Chase’s subtle stem toward the inside. Right as he gets within 2 yards, he stab steps inside to manipulate Pierre. Chase then attacks his blind spot and blows by him. He caps off this play with an excellent display of ball-tracking and hands. Even if he struggles with consistency in his route breaking technique, I believe that will develop in due time. In the meantime, his release versus press looks will continue to afford him more than enough separation.

We can see Chase show consistency in executing this type of subtle hip manipulation. Watch this other touchdown where he encourages Joe Haden to keep his hips to the boundary. Selling an outside break with the jab step at the top of the route is what gets him his eventual separation.

These are all highlight plays, but we need to see what is happening when they are not targeted to assess receivers effectively. We also need to answer the question “why?” If Chase isn’t the first read on a given play and the first read was open, then there may be no issue. If his task was occupying double coverage, then that is fine too. We want to see what happened when Burrow looked elsewhere.

The tape mostly shows one of two situations:

Let’s look at a play for the latter situation. Chase flanks Uzomah on this bunch opposite Boyd. Uzomah streaks up the seam while Chase runs a “Go” down the numbers. Sutton ends up late in pursuit of Chase freeing up Boyd underneath in the flat. Fitzpatrick comes over to bracket Chase, but he snaps off his route right in the zone soft spot against Cover 2. This is excellent mental processing on his part and a little context as to why there was no target here.

That play may not have been a super obvious case of double coverage, but this play shows without a doubt that he is getting that extra attention. This is an excellent way to affect the game without getting the ball. Chase is a real threat, and the Steelers’ attempts to take him away all but confirm this.

Chase exits this series with him striking off two of the three remaining questions I had at the start of the season. The remaining question of his jump ball ability translating will come in due time. At the end of the day, if his separation continues to improve and build on his release, it may not matter. Chase will continue to be fun to watch.

Here is something to think about. Fellow Nerd Cameron Copeland pointed something out in his latest Analytic Deep Dive article. He aptly points out that Burrow’s passing volume has taken a dip so far in 2021. This could become a concern as this lower volume may not be able to support all three pass catchers in a meaningful fashion for fantasy. While this could hurt Chase (especially when Higgins returns), it could more likely benefit chase at the expense of Boyd or Higgins.

Here is the great thing about it. There is probably going to be a down week or two (hopefully back-to-back) for Chase. Should that happen, smash your buy window! The offensive line is doing ok, and Chase and Burrow are rekindling that connection. In the long run, it will pan out if you can acquire him.

For Week 4, we will look in on DeVonta Smith and Najee Harris, each of which has their own challenges in translation. Maybe better weeks will give a more balanced body of work to evaluate.

Next Man Up: Week 3 Injury Review
Flexy and I Know It: Start/Sit Week 4
25% Off Sitewide - Use Coupon Code "Black-Friday".