What do we know about the Slim Reaper through 4 weeks? Can he be the real top-end dynasty asset we projected during the draft season? Take a look at the tape with @FFB_Vern to see. 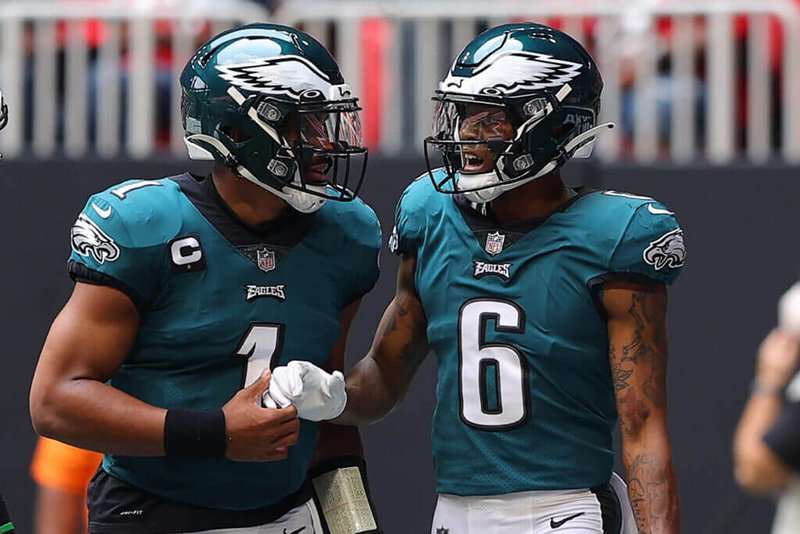 After a tough week against Dallas in Week 3, Devonta Smith shows out with a 122-yard performance. Smith is showing a deep impact versus being merely a deep threat. This performance is more what dynasty GMs were expecting when drafting him. Granted, the context of this game involved chasing the Chiefs’ points against a subpar defense, but positive signs nonetheless. Walk with me through the film analysis of DeVonta Smith through Week 4.

Smith’s BMI is showing to be an occasional issue on “Go” routes where he will typically speed release to the outside. Unfortunately, this often allows cornerbacks who can match his feet to crowd him to the sideline. In these situations, Smith is unable to maintain the “red line” which makes it a much smaller window in which the passer can place the ball. We saw a little bit of this in week 2. We all know that Jalen Hurts is not the most accurate passer which makes this a much bigger issue.

So what should we look for to ease our concerns in this area? Smith has already put on tape that he can release inside on a “Nine” route. A heavier utilization of an inside release will facilitate the manipulation of corners off the line of scrimmage. Again, Smith has shown he can do this, but we want to see more of it.

What else do we need to see? Well, Smith can’t get boxed out of the “Nine” routes he doesn’t run. Right? He is not a one-trick pony. In fact, he is quite the opposite. Per his Reception Perception prospect profile, Smith only ran a “Go” route 13.9% of the time. Contrast this with his usage through four weeks, where he has run 32 of them on 171 passing plays. This is almost 19%!!! This doesn’t help him as it wouldn’t really keep defenders guessing.

When comparing him to other sub-200 lb receivers, it seems he is misused. DeVonta Smith is known for his polished route running and his subtle speed. For route running, I compared him to Calvin Ridley. Ridley has only run “Go” routes on 9% of pass plays this season. Hmmm. For speed, although one could argue the vast difference, I compared him to Tyreek Hill, who only ran “Go” routes 10% of the time. Compared to the other two speed receivers on the Eagles, they are both running Nines at a 20% rate. So this begs the question, “Why is the coaching staff not maximizing his route running more?” Another nugget I found is that Hill is utilized on Seam routes 13.7% of the time, but Smith has seen only three such routes over the same span. This screams misuse.

Nick Sirianni is a new coach, but I hope his analytics guys are pounding the table with that data. Could you imagine what Smith would be doing if Siriani moved him around the formation? What if he didn’t line up as the ‘X’ receiver nearly 100% of the time? This is a missed opportunity that only the coaching staff can fix. Moving Smith around a bit and designing plays for him to maximize his route-running would be a smart move. We need to see evidence of that before making any long-term conclusions of DeVonta Smith’s performance.

DeVonta Smith shows intelligence on this red zone play. He faces DeAndre Baker, who has significant outside leverage on Smith. On the snap, Smith wastes no time attacking his leverage since he knows he has a positional advantage for this drag route. This may not look like much, but I have seen many young receivers waste time with some “shake-and-bake” in similar situations.

Use of Hands and Explosiveness

Against this Cover 3 look, Smith releases inside against press using a hop to close the distance, then bursting upfield. He shows great use of hands to clear Hughes’ contact and stacks him immediately. He tracks this ball and extends his hand before Hughes is on him to maintain space. Perhaps this is why he isn’t called for an OPI since he didn’t “push off” here. He comes down with this well-placed ball from Hurts. Smith contributed a lot to this play, but there is a major contributing factor. His alignment on this play is something I would like to see more often. This reduced split (AKA the “Nasty” split) is great for giving him more room to work with. Sirianni needs to mix in a little more of this. Look at the field just before Smith breaks. The play could call for a Dig or even a Curl right there as Hughes flies by.

DeVonta Smith has shown a knack for finding Zone soft spots over these early weeks. He seems to throttle down in just the right spots often. In this play, we see how the route break is at just the right depth. If Jalen Hurts recognized this as Cover 2, he may have had a shot at hitting Smith in stride. Unfortunately, this would require Hurts to get through his progressions faster with a better understanding of the big picture. Sirianni, to his credit, is trying to keep things simpler for Hurts with half-field reads. This will reduce opportunities for Smith when he is the lone receiver on his side of the field.

We should have enough evidence to know what DeVonta Smith is as a fantasy asset and as a football player. We also understand his limitations. DeVonta Smith is a very good receiver that the Eagles will eventually win because of. He shows his football IQ in his release and route running against man and zone, press and off. Smith will be a 3-level threat, but he will be limited in total production. These limitations won’t be due to anything he can’t do. Instead, the limitations are from a young coach and signal-caller. Subpar usage will continue to hinder Smith’s upside, and accuracy issues from the QB will impact his opportunities.

The upside is the following: Smith is producing within these circumstances, and given the opportunity, he will overcome the BMI disadvantage. As Hurts and Sirianni improve, Smith’s production will improve over the long term. And with that, DeVonta Smith exits the rotation, and we can invest in him with confidence.

Next week, we will finally get a good look at Najee Harris’ body of work. There is plenty of stats to drool over, but the tape has some cause for concern. We’ll see if he can alleviate my personal concerns against Denver in Week 5.