Olabisi Johnson is cementing himself as a legit receiving option in Minnesota, @NateNFL tells you why you better buy in now. 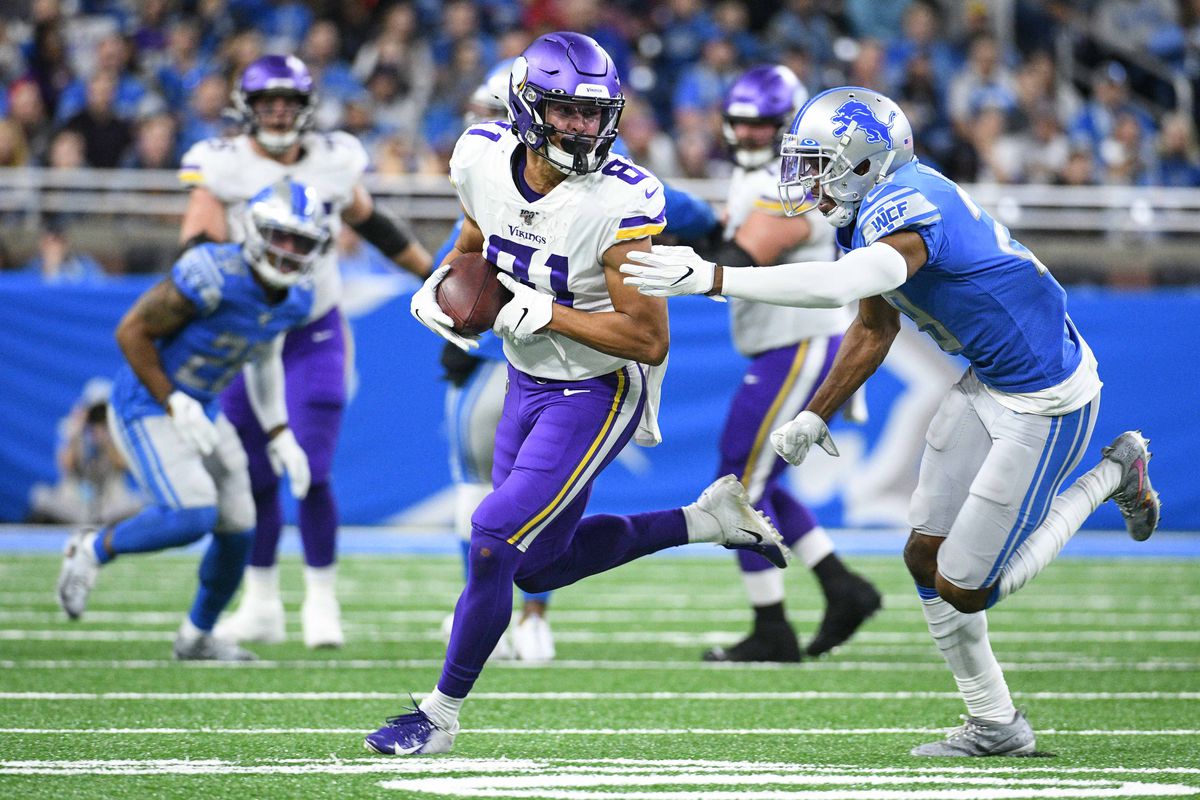 Olabisi Johnson is making noise in Minnesota. Kirk Cousins recently came out and said that Johnson had the best training camp. And RotoWorld has reported that 2020 1st round pick, Justin Jefferson, has played as the third receiver during drills and practices. Johnson has seemingly impressed enough to be “locked-in” as the #2 target for Kirk Cousins. But why have you not heard of Olabisi (also known as Bisi) Johnson?

Bisi came out of Colorado State University as a 7th round draft pick in the 2019 NFL Draft. He spent the better part of his college career behind Michael Gallup and Preston Williams. Suppose we make the excuse that we can overlook statistics like Dominator Rating (percentage of team yards/TDs) for Henry Ruggs and Jerry Jeudy due to the competition at their position. In that case, we certainly can make the same exception for Johnson. Gallup and Williams have quickly become some of the better young receivers currently in the league.

Johnson saw significant playing time in his sophomore year. He put up 613 yards and four TDs on 28 receptions, good for a 21.9 average. The next year he caught 41 passes but only had 595 yards as his extraordinary average fell to a more reasonable 14.5 yards per reception. His senior season, across from Preston Williams, he put caught 54 passes for 796 yards. While not a standout performance, his stats were not seen as a knock of his NFL prospect profile, especially considering his competition at CSU.

At the combine, he measured in at six-foot on the dot and 204lbs. Great size for a receiver to be able to play across all positions, inside and out. His athletic profile (4.51 40-yard dash) once again does not knock your socks off, but he should enough to be able to hold his place among NFL defenders. Johnson was known as a skilled route-runner who was quicker than fast and boasted some ability to gain yards after the catch.

Johnson ended up being selected by the Minnesota Vikings with the 33rd pick in the seventh round. At this point, his place on the roster was not a guarantee, and he would have to fit to just get an opportunity. He would make the team and even impress in the 2019 preseason games.

During the season, Johnson would see 45 targets, all of them coming after Week 3. He caught 31 of those passes for 294 yards and three touchdowns. His 88.6% True Catch Rate (which omits uncatchable targets) was this highest of any 2019 rookie receiver with at least 25 targets. When Adam Thielen missed time during the season, Olabisi Johnson stepped in to help pick up the lost production. He did just that in Week 7 versus Detroit. Johnson had eight targets (the same as Diggs that game), caught four passes, and had a touchdown. From Weeks 7-14, Johnson saw over 50 snaps in every game but one.

Throughout the season, Johnson played both inside and outside, showing his versatility in any situation. He did play more snaps from the slot than anywhere else, due to his situation of filling in for Adam Thielen, but showed enough ability in both positions to be considered a bonafide WR3 for the team.

In March, the Vikings decided to trade away star receiver Stefon Diggs, only a year removed from his contract extension kicking in. This brought Bisi Johnson into the fold to gain significant playing time. But in April, the team selected Justin Jefferson in the first round of the 2020 NFL Draft, a pro-ready slot receiver who had just finished an all-time season with LSU. Johnson was back to being the WR3… or so we assumed.

In a limited offseason, Olabisi Johnson has taken the Minnesota Vikings camp by storm. As Kirk Cousins stated earlier, “Bisi Johnson has had one of the best camps out of anyone on the team.”. Not just out of the receivers on the team, but all the players. Going into the 2020 season, many people have worried about the passing offense for the Vikings. Thielen was banged up for the majority of the 2019 season, Stefon Diggs was moved to Buffalo, and former first-round pick Laquon Treadwell was in Atlanta. Justin Jefferson, while a top-pick, would have to deal with the transition to the NFL. The opportunity was placed in front of Johnson, and he has seized it. All of the reports and videos out of the Vikings camp have shown chemistry between Cousins and Johnson as well as production versus some of the top young defenders Minnesota has invested in.

Justin Jefferson is certainly no slouch, and therefore there’s no job security for Johnson if he starts the season out as the WR2 in Minnesota. But on a team where an oft-injured Adam Thielen is the only proven receiver, there is a great chance for Johnson to be a fantasy-relevant player this season. Whether as the WR2 or the WR3, Johnson will likely see a significant amount of targets this year. The Vikings defense lost some key pieces this year and will likely have to pass the ball more this year than they have in the past. That equates to more chances for Johnson to get the ball in his hands.

Johnson could have many weeks this year where he finishes as a WR3/Flex, and with a higher upside based on touchdowns. He’s certainly worth a stash in any dynasty league until the Viking’s receiver situation becomes more apparent. For many leagues you will be able to find him on your waiver wire. If not on the wire, he would likely be a very cheap addition to your team if your looking for help at wideout. You’ll likely be able to flip him for more after a couple of weeks of the 2020 season.

2019 seemed to be a historic year for rookie receivers. We should remember that many receivers don’t break out until their second or third season. While Johnson didn’t have an elite profile as a prospect, he has been placed in the perfect situation to make a name for himself. Teams don’t trade away star players without faith in their backups. Sso far, Bisi has been shown his worth to Minnesota GM, Rick Spielman.

Surely it’s a gamble, but championships aren’t handed out to the conservative.