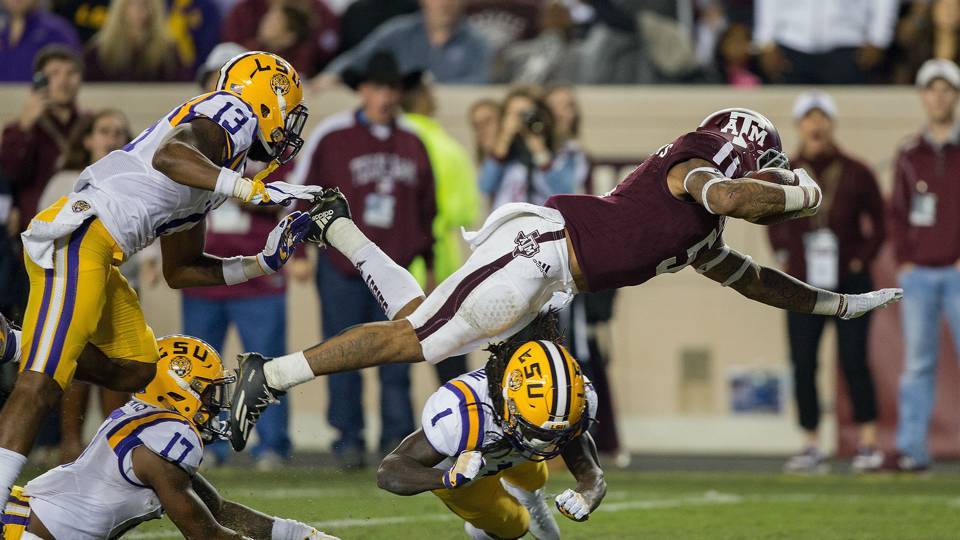 There are a lot of glaring similarities between 3 of my favorite RBs in the 2019 class. Devin Singletary, Darrell Henderson, and Trayveon Williams are all 5’9” 200-pounds and have video game type production over their college careers.

I’ve previously covered Henderson and Singletary, but not Williams. Williams was a local recruit for A&M from the Houston area. Right off the bat, Williams became a difference-maker for the Aggies, becoming the first true freshman in program history to run for over 1,000 yards (1,057 on 156 carries, 6.8 per, eight touchdowns) while also catching 19 passes for 91 yards. He had a slight down year as a Sophomore before bouncing with a fantastic Junior breakout campaign. In his Junior season Williams earned first-team All-SEC and second-team Associated Press All-American honors by finishing in the top five nationally with 1,524 rushing yards. His college stats can be seen below:

Despite his seemingly smaller physical stature, there’s a lower body thickness to Trayveon. He has powerful legs that keep churning through contact. His powerful lower body make him difficult to bring down. I also love his receiving ability, having reeled in 66 receptions for 561 yards in his 3 college years. The power that Trayveon possesses makes him a threat at the second level. He frequently pulls away from defensive backs and has elite top end speed.

The Athletic’s Dane Brugler has commented, “he is quick out of the blocks with the vision and competitive run style to pick, slide and weave through enemy territory.” Fantasy owners have to love a prospect that is a threat to score a touchdown every time he touches the ball.

You can see his breakaway ability on these 2 plays:

Despite running with a physicality that exceeds his size, Williams does occasionally run a little upright for my liking. Admittedly that can be overlooked when he’s expected to run a 40-yard dash in the low 4.4s.

Currently I view Williams as an early 2nd round rookie selection for Dynasty rookie drafts. I’m really curious to see his cone drills at the combine as I think his explosion could blow people away. Like Singletary and Henderson, Williams is another RB in a 2nd tier after the likes of Montgomery/Jacobs that could see great fluctuation in ADP over the next few months.