Another week, another explosive play! Is it just a temptation or does truth exist beyond the surface? Find out about Justin Jefferson’s week 3 performance with @FFB_Vern. 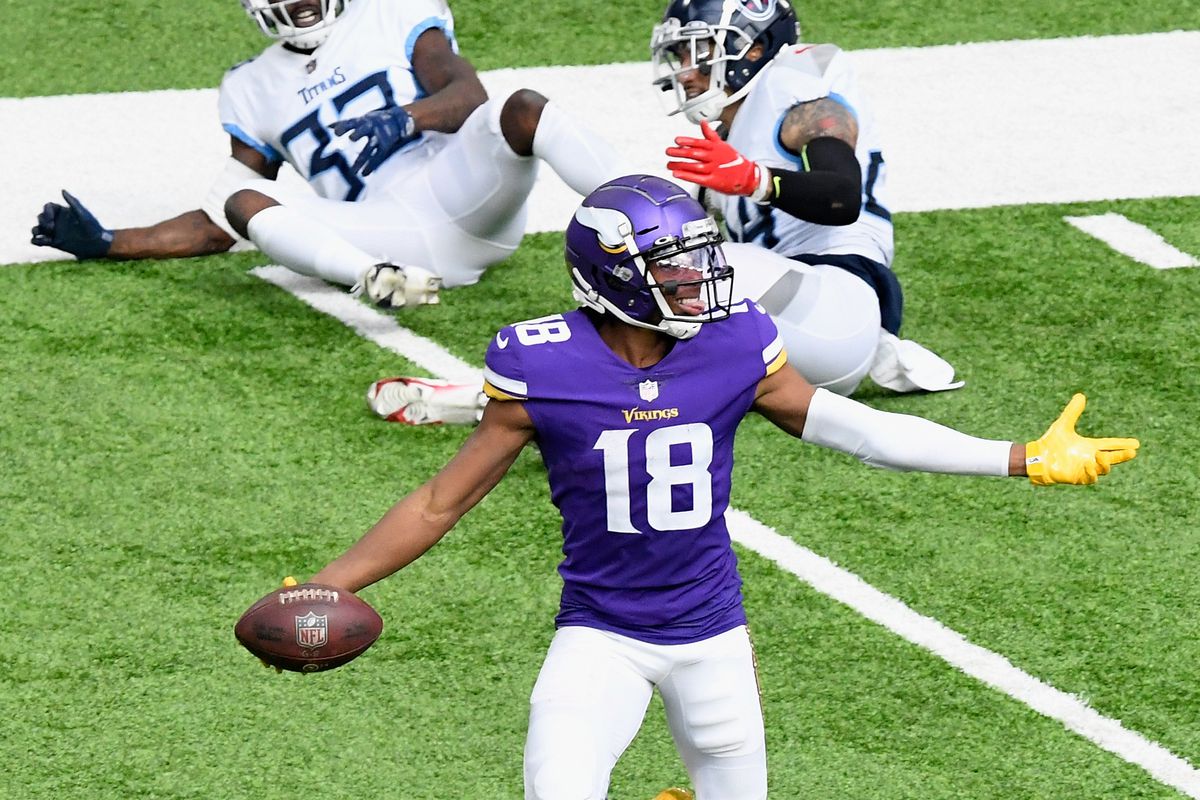 Justin Jefferson officially exploded onto the scene in week 3, or has he? Everyone saw the 71-yard score against the Titans last week and the stat line to go with it. Are we ready to anoint him?

Great statistical performances, like highlights, should be examined deeper. Let’s take a look into Justin Jefferson to determine if he is for real. If the answer is ‘yes,’ then hopefully we can take advantage of the doubters. Otherwise, we can express patience or potentially sell him to someone more excited about him.

Justin Jefferson seemed one of the more polished route runners in the 2020 draft class. Fellow Nerd, Jon Diment, highlighted all of Jefferson’s positive features Jefferson back in February. Jefferson became the 22nd overall pick by the Minnesota Vikings, who probably hoped he would fill the void of Stefon Diggs‘ departure. Given the route running he put on tape in college along with the 4.43 40-yard dash at the combine, the Vikings could be right.

All the ‘Truth or Trap” articles begin with the highlight. Why? Because I know some of you out there made a decision (or at least thought about it) upon seeing it. Let’s take a look at it.

As big plays go, we all loved this play; it is pleasing to the eyes. Upon further review, there are some positives we should point out. First, the pre-snap motion, the play-action, and the defenses commitment to man-up underneath all add up to a positive scheme advantage. Next, Jefferson releases and stems nicely with a pressure step to set up the Post route. His technique is what exploits Jonathan Joseph’s approach to defending the route. At the end of this play, there was a combination of good change of direction and bad tackling that turned this into a score.

One of the reasons it is important to break down these explosive plays is to identify contributing factors. The play of the deep safety takes some shine off of this play as he made two clear mistakes. One, he completely ignored the right third of the field vacated by the free safety. Two, he prioritized bracketing Adam Thielen even though he had to see Joseph was clearly beat.

The main takeaway is that this was a confluence of events that resulted in the play. Jefferson did execute with excellence on this play, but the total success had a number of contributing factors.

As intriguing as the big play was, responsible dynasty managers will dig into the tape. If you don’t have the time to do it yourself, well, that’s what we are here for at DynastyNerds. Jefferson is showing some next level attributes that should contribute to future success.

Taking advantage of Zone defenses is a must for an NFL receiver. It’s a good thing this skill is carrying over from his time at LSU. He began to show his prowess in this area in Week 2.

In the first clip below, we can see his ability to change his pace or throttle down as he settles in behind the linebacker. This gives Kirk Cousins a slightly bigger window of space and time to throw this one over the middle. This is the type of ability that will help any quarterback.

He builds on this against the Titans (currently ranked first in passing DVOA, per Football Outsiders) in week 3. In the second clip, we see consistency in his recognition of the defense and intelligence to settle in right as he is passed off. His after-the-catch ability is on display. It almost seems like he was aware of the deep safety’s closing angle upon catching the ball. That awareness of defender’s locations on the field and anticipating their path are qualities we look to validate in future samples.

Competitive toughness means a lot of different things at the NFL level. For Jefferson, his deployment and playstyle demand a certain type of toughness. As one who thrives in the slot, it is required that he is unafraid of catching passes over the middle of the field and demonstrates the requisite hand strength to secure the ball at the catch point, through contact.

He definitely demonstrated this ability in college, but we all know NFL hits are a bit different. This is something that Jefferson’s advocates wanted to see confirmed on tape at the next level. Keep watching for consistency in this area as the season progresses.

No matter what your opinion is of Kirk Cousins, the chemistry between him a Justin Jefferson is critical. While their relationship is in its infancy, the only way it improves is if they remain on the same page.

We will focus on the second clip in the above-embedded tweet. This was a pick-six on a play that many will pin on Cousins. The challenge is that we know the coaching points for neither Cousins nor Jefferson, so it is impossible to get to the ground truth here.

It appears that Jefferson did the right thing to convert whatever route he had to a hitch. The threat of the blitz demands that of him and requires Cousins has the proper hot read. It seems that Cousins was expecting Jefferson to be by the sideline. Frankly, Cousins’ decision made much less sense schematically than Jefferson’s, so I think the rookie gets the benefit of the doubt.

At the end of the day, I have to give my opinion on Jefferson upon submitting this writing to the editorial staff. Justin Jefferson is an emphatic ‘Truth”. We see evidence on tape that he can succeed in the NFL. His route running has translated, there is no worry about his hands, he has the competitive toughness required for his playstyle, and he has at least a competent quarterback.

My only reservation is this. An opinion I respect in the scouting realm mentioned that Jefferson melts upon contact mid-route. Not at the catch point (he is very good there), but route stem. Those of you still on the fence, even after reading this, should evaluate this specific aspect of his game. Slot deployment will not provide a lot of exposure to this, but keep evaluating it if you get the chance.

Some of you may be asking yourselves, “Why, did he spend time to write about an obvious rookie like Jefferson?” I get it, but there are hundreds of examples of players just like Jefferson: highly rated, highly drafted (fantasy and NFL drafts), along with an impressive profile. A lot of them do not pan out, and I start these articles not knowing the outcome. This way, if there is a reason to sound the alarm despite an eye-popping highlight, I can do just that.

Until next time, my advice on Justin Jefferson after week 3 is to by with a tiny bit of caution. With that said, I wouldn’t be against a slight overpay if you are building for the future. Keep an eye on his value compared to depreciating assets with the DynastyGM tool, so you know when to make a move. Any drastic changes in my opinion over the rest of the season can be captured on Twitter, @FFB_Vern.