Travis Fulgham has stood out in back-to-back games indicating there is some truth to his ability. Dive into the Tape with @FFB_Vern and decide for yourself, is it truth or trap. 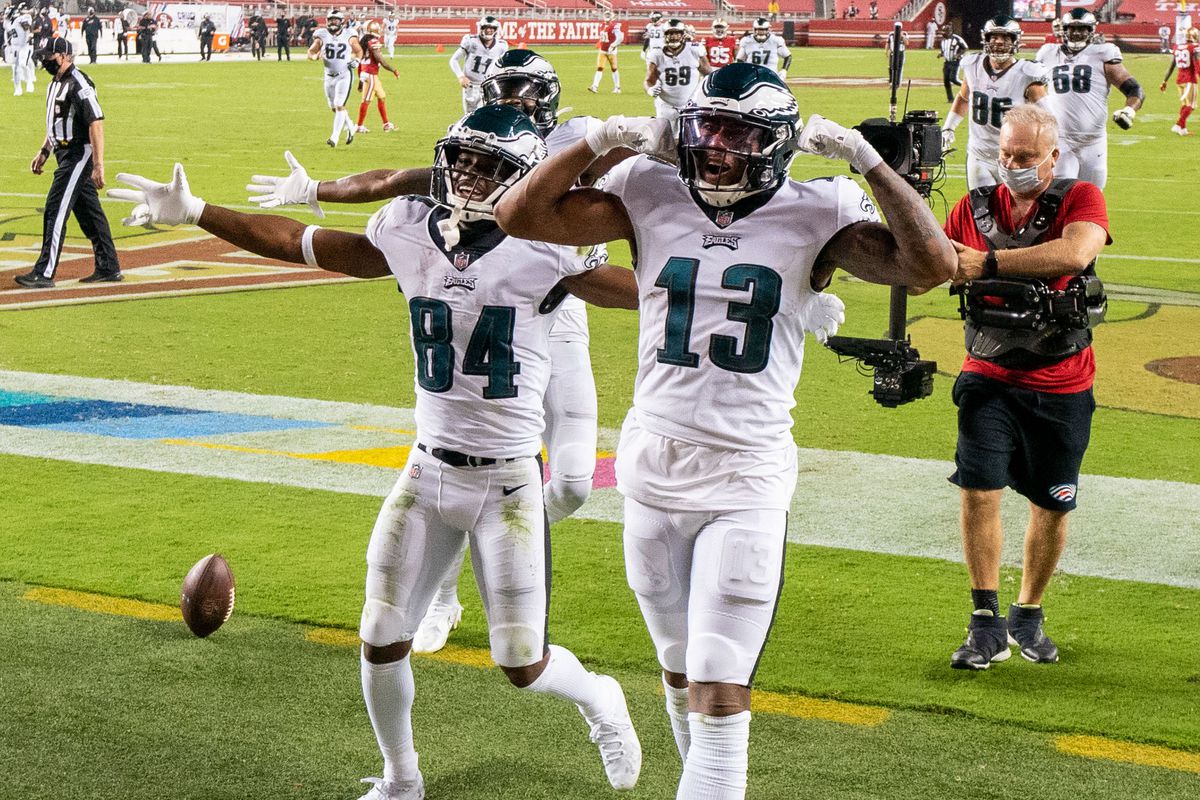 It should have been Jalen Reagor as the first Eagle I would break down in this series, but it’s 2020 and here we are. It truly feels like the upside-down when a player who got the condensed Raheem Mostert treatment blows up for 10 catches, 152 yards, and a score in only his fifth NFL contest. This type of thing reminds me of the “Kevin Ogletree” days, a performance that screams, “TRAP!!” As I will continue to say, we have to look at the tape. Can we really expect more of this?

Travis Fulgham was one of the first players in Old Dominion University history to be invited to the Senior Bowl. As you might expect from a second-year player you are probably just hearing about a week or two ago, he had one catch for seven yards in that game. He did go to the combine, but the metrics do not really stand out.

While the numbers aren’t stellar, the comparisons are interesting, including Corey Davis, Allen Lazard, Tee Higgins, and DeVante Parker. That is quite the range of outcomes, but still interesting to see.

Another comparison that may be worthwhile to consider is that of his performance in week 5. Other receivers who have had a game with at least 10 receptions and 152+ yards include Julio Jones, Odell Beckham Jr., Larry Fitzgerald, and Anquan Boldin. Don’t anoint him yet, as Austin Collie and Brian Hartline were also on the list. Nonetheless, this is still intriguing.

While we can get into the circumstances that opened the opportunity for the ODU alum, we will start with the tape. The first thing that stands out is his route running intelligence.

Fulgham earned your attention w/ 10 recs on 13 🎯s for 152 yards and a score in week 5. Is it real though? There are some indications it’s real. For example, his mental toughness on this 3rd and 17 play cannot be overlooked. It doesn’t seem “too big” for him. pic.twitter.com/Yw1EjPSp4p

There are two things to watch on this play against Cover 3, with Joe Haden covering the deep third. First, watch how he bends inside just after passing the shallow defender. Receivers can attack that vulnerable area just between the corner and deep safety on an in-breaking route. The bend inside leads us to the second thing I want you to see. Joe Haden’s hips stay committed to the inside as he pushes upfield. While Haden has a wicked speed turn, it doesn’t matter as Fulgham breaks for this out route. Nice and subtle.

Another thing to note is the down and distance. Third and seventeen?!? A lot of unestablished players could melt under the pressure of converting this play. The moment’s weight didn’t affect his speed, plan, or concentration, which is saying something. This level of mental toughness is highly sought after at any position in the NFL.

In this next play, he continues to show his mental toughness on 3rd & 12. This time, matched up against CB Mike Hilton, we see some additional desirable receiver qualities. Against this Cover 2 look, attacking the area between the two deep safeties is common. Hilton started with inside leverage, yet he still was unable to divert Fulgham’s route. Fulgham’s ability to maintain his stem (play strength) and stack towards the top of the route is impressive. The accuracy of this pass notwithstanding. Fulgham still demonstrates his ball tracking ability, hands, and competitive toughness.

This resilience on 3rd and long continues on this 3rd & 12. He adds to that a demonstration of mental toughness over the middle w/ three defenders closing in. pic.twitter.com/EWXRrQzliO

Fulgham must really like to show out on 3rd down, or maybe Wentz just trusts him this quickly. We see a 3rd & 8 play here where he continues to demonstrate some route running nuance that affords him wins 1-on-1. pic.twitter.com/URcswgN0Jp

On yet another third and long, he continued to shine, this time against Steven Nelson. In this “nasty split”, Nelson has outside leverage. Any good receiver knows attacking leverage is paramount for DB hip manipulation. Fulgham’s slight outside release while closing the gap on this off coverage look attacks Nelson’s outside leverage. On Fulgham’s fifth step, Nelson feels he needs to open his hips to go upfield. Fulgham presses his stem vertical, continuing to close the distance between himself and Nelson, forcing Nelson to commit upfield. Right at this point, the receiver jab steps to break right into Nelson’s blind spot. He flattens his route and elevates after a 1-step gather to high-point the ball. He secures the ball through to the ground despite contact. That “my ball” mentality is yet another desirable quality.

Travis Fulgham’s play and success in the field’s intermediate areas are clearly valuable to the team. The three plays above do not highlight his deployment versatility. Fulgham had success on and off the line of scrimmage, outside and in the slot, and even a snap out of the backfield. Given this variety of deployment is the excuse many made for J.J. Arcega-Whiteside‘s struggles last season (including myself), it speaks to Fulgham’s intelligence. Remember, play speed is a combination of mental processing and athletic ability. If their vision-decision-action cycle is fast because they don’t have to think as long about the decision piece, players can often appear faster than their 40-time may indicate.

Like his counterpart on the Steelers, Chase Claypool, Fulgham’s opportunity came as a result of an injury. It is often hard to evaluate these situations properly because there is always a lingering question. Does this player, who is showing out, give the team a better chance to win over who they are replacing?

Some of you are surely trying to answer that question for yourselves when looking at the Claypool/Diontae Johnson situation. For Fulgham, this is much more complicated. There are many receivers being paid a lot of money that were injured for him to get this opportunity. Alshon Jeffery, Desean Jackson, and Jalen Reagor are all missing time. One might say there is no way Fulgham plays over any of them when they return, but is there a possibility he sees the field more than last year’s late season darling, Greg Ward?

Things to Look For

Given the situation we just covered, the first thing to look for is obvious. We need to see his snaps remain consistent when those other players return. Fulgham seeing the field alongside Jeffery and Jackson would be a boon to his value.

The second thing to look for we will be able to see in Sunday’s game against Baltimore. The Ravens have bigger, more physical cornerbacks, and I would like to see play strength present in his routes. Additionally, I want to see how he does with the jam when pressed. Success in these two areas could move the needle toward ‘truth’ as well.

The obvious chemistry and trust between him and Wentz work in his favor. He is showing nice qualities on the field, especially in big situations. As much as I would like to call an up-and-coming Eagles player a ‘truth’, I believe this one is a trap. If you buy Fulgham because you believe he will elevate to the Eagles’ WR2 or better within the next few weeks, he is, in fact, a trap.

His skills on the field are no fluke, and it wasn’t scheme or broken coverages that allowed him to succeed at this level. While those facts may scream ‘Truth”, the situation counters as “Trap”. If you are already in this trap, don’t bail too quickly. Patience could pay off in the long run; there is just no immediate return on investment. Desean and Alshon are far from being pillars of health, so even when they do return, he will have a chance to shine again. The best thing about the situation is the “buy-low” window is open as soon as he loses snaps to either of those receivers. Keep an eye open for that opportunity.

Until next time, keep following me @FFB_Vern on Twitter. It is there where I preview these articles with some tape breakdowns. As you are thinking about making moves, why not equip yourself with DynastyGM. It makes crafting trades across multiple leagues much easier. It’s so worth it.