Tua is truly one of the most intriguing quarterback prospects in this year’s draft and comes with risk. @thedraftgenius hits on the cream of the crop of this year’s quarterback class, Tua Tagovailoa and shows why he is worth the risk. 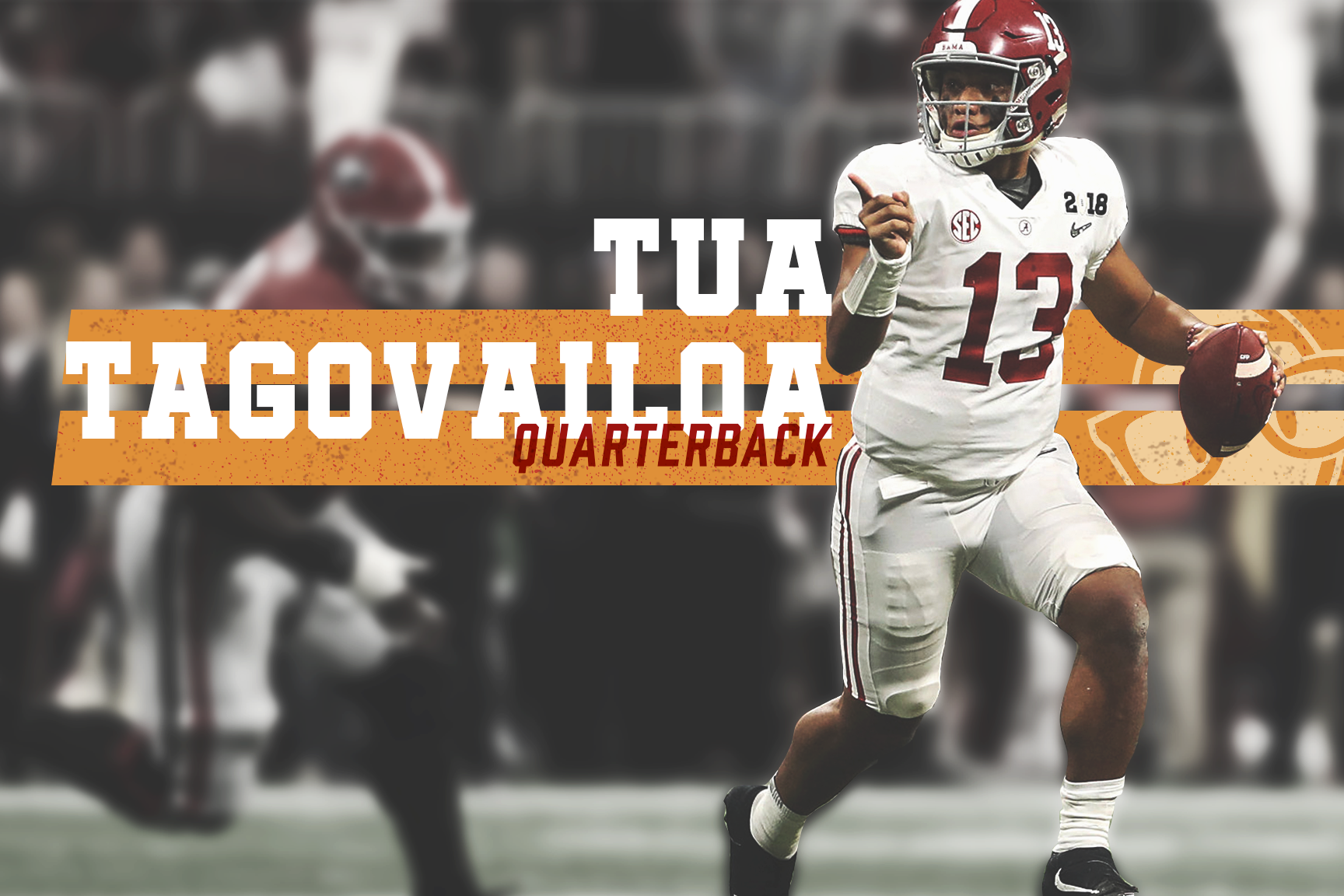 Tua Tagovailoa might just go down as the greatest quarterback to come out of Alabama. Tua was a 4 Star Quarterback, out of Hawaii, who was ranked 3rd in his recruiting class behind Kellen Mond and Tate Martell. It is safe to say he should have been ranked 1st.

Tua played in 8 games during his first year at Alabama. His stat line of 636 yards, 11TDs, and 2 INTs should have been the sign of his upcoming greatness. As a freshman, Tua was forced into taking over for Jalen Hurts in the 2018 National Championship game. He put up 166 yards, 3TDs and 1INT against one of the nation’s top defensive units in a moment’s notice. This is what propelled him to the starting job in his Sophomore season.

Tua’s sophomore season was nothing short of spectacular. He would end up posting nearly 4000 yards along with 43TDs and 6INTs. Tua did all of this with a group of young receivers who had barely played in major roles before the 2018 season. Tua ended this terrific season with 2nd in Heisman votes and having his favorite target, Jerry Jeudy, win the Biletnikoff Award for the best wide receiver in the NCAA. Being that Tua had officially usurped Jalen Hurts for Alabama’s starting quarterback gig, Jalen Hurts would enter the transfer portal and transfer to Oklahoma for his final college football season. Tua was now set for an even better Heisman campaign in 2019.

Alabama opened the 2019 season against Duke. It was evident in this game that Tua was on a mission for the Heisman. He went 26 for 31 and put up 336 yards. His 4TDs in this game would mark the beginning of his 23TD run without an interception in the 2019 season. Tua tore up his next few opponents and posted two 400+ yard games. His first real SEC test would come against Texas A&M. Tua would end up putting 4TDs on the board and throw his first INT in this game. Alabama won 47-28.

The following week, against Tennessee, would be the first time of the 2019 season where Tua would get hurt. Tua would not play again till his matchup with LSU on November 9th, 2019. He would start the game of hot but ended up dropping the ball in the RedZone on Alabama’s first great drive. Tua would end up getting banged up some more in this game, frequently getting looked at on the sideline by trainers in between drives. Ultimately, Alabama would lose to LSU with a score of 46-41 but Tua would end up with 418 yards, 4TDs and 1INT. With Alabama sitting at 7-1 and still in reaching distance of the College Football Playoffs, a statement needed to be made against Mississippi St. in the following week. Tua would start the game going 14 for 18 with 256 yards and 2TDs. It was 3:10 left in the 2nd Quarter with the score of Alabama 35, Mississippi St. 7. Before the snap, the announcer told the audience, “The great question is, when will Tua check out for the afternoon?”. Little did we know, this would be the last play of Tua’s college career.

Tua would drop back and scramble away, left, to try and avoid a sack. When he was brought down, he landed on his hip wrong and dislocated it. This would end Tua’s college career. He would end his last season at Alabama with a stat line of 2840 yards, 33TDs, and 3INTs. His ending total college numbers would end up placing him first all-time in touchdowns and third all-time in yards at Alabama University. Now, Tua is looked at as one of the top quarterbacks in this year’s class.

Tua is truly a magician when it comes to pocket awareness.

As chaos surrounds Tua, he does not stray away from his reads. His consistency in moving from his primary read to his second and third is unmatched in this class. Downfield vision, as good as his, is a key component when predicting success at the next level. Knowing the fact that the NFL game is much faster than college football, this is one of the many reasons why Tua is a top quarterback prospect in this year’s draft.

Below you can see a glimpse at Tua’s production under pressure.

As seen in this snippet of stats, from Sports-Reference.com, Tua’s production is truly elite. His consistency in TD to INT ratio and completion percentage are, also, tells of his future NFL success. With the ever-revolving door of wide receiver talent in the NFL, Tua will be no stranger to change, being his targets changed year to year at Alabama. No matter the situation Tua is drafted into, I firmly believe he will be one of the greatest quarterbacks to come into the NFL for the next decade.

This can also be considered part of his Pocket Awareness. His scrambling ability is so impressive, it deserves its very own spotlight. Time after time, when watching Tua, you can see his scrambling ability and “jets” when needed to get away from defenders. His ability to extend the play will come in handy, assuming he goes top 10 to a quarterback-needy team with a less than the great offensive line.

Tua does not have many weaknesses. Some may say his throwing power or he needs to get better at dissecting disguised coverages. This comes in a time in the NFL with coaching and growth. One thing that is a given weakness, which cannot be fixed, is his injury history. Tua’s list of injuries is nothing short of worrying. This will be the reason he falls out of the top 3, where at one point he was a lock and ends up in a somewhat better situation in the NFL.

Tua is, in my opinion, the best quarterback prospect we have seen in years. He is the total package, aside from his injury concerns. He has all the intangibles to be in the Hall of Fame in 40 years. The main storyline of his career will be, “Can He Stay Healthy?” and I believe he can. To do so, he has to go somewhere where they will build a stout offensive line around him. So where are these places?

When we look at the draft order for the 2020 NFL Draft, we notice quite a few teams with glaring needs at quarterback. We now he will go in the top 10 so let us limit the teams to that range at first. From the top, the Bengals, Lions (depending on Stafford’s future), Dolphins, Chargers, and Panthers are all of the favored landing spots for Tua. His best bet would be to land in Detroit or Carolina gave their improving offensive line. Here he would be set with great wide receivers and other offensive weapons.

My preferred landing spot, for peak success, would be in Indianapolis or New England. Though, hard to imagine, both teams have some assets they could use to move up and take Tua. These are the perfect situation where I can see Tua reaching his ultimate potential based on situation, coaching, and ownership.

Tua will more than likely need some time to recover from his hip injury, in year one.

He still warrants a first-round pick in all Superflex leagues and a second-round pick, at the latest, in all formats. Depending on the landing spot, he should be the first quarterback off the board. With his potential weapons on all of the teams I named above, minus the Phins, one can see why this is the case.

I am also on the DynastyWire Podcast and Sleeperwire Show.

Thank you for reading. There is a lot more to come to this off-season so remember to always check DynastyNerds.com for all of your football needs!