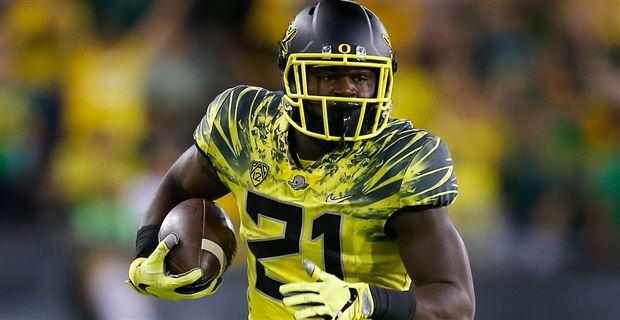 In his 4 years as an Oregon Duck, Royce Freeman dominated. Nevertheless, in the pre-draft process there are those that continue to knock him. They say that he has too much wear on his tires to have a long shelf life in the NFL. They also say that his eye popping statistical production is attributed to Oregon’s spread offense leaving soft boxes, thus allowing him to dominate.

But, I believe he deserves more credit and shouldn’t be underestimated. He certainly put many of the athletic doubts to rest at the combine. There were those saying he had lost a step, but Freeman silenced the haters by running a 4.54 40-yard dash at 5’11”, 229 pounds (85th percentile speed score). Additionally, Freeman showed his explosion with a 34-inch vertical jump, 118-inch broad jump, and a 4.16 20-yard shuttle.

Freeman was a steady contributor at Oregon and the big bodied back consistently got the job done. His muscular frame combined with great vision and soft hands racked up the yards. A breakdown of his college stats can be seen below:

Perhaps what’s most impressive were his freshman (alongside Marcus Mariota) and sophomore seasons. His progress was slowed in his final 2 years due to knee injuries which took a toll on his explosiveness, but he began showing us in 2017 that he was getting back to his best.

Despite the injuries, 6,435 yards and 64 TDs for any prospect is impressive. There are plenty of boxes that Freeman ticks for me. He has suitable size for a 3-down back, has vision, power, good footwork, and an ability to catch.

Subsequently, it’s peculiar to see him so far down draft boards. Yes, 1,026 college touches are quite a hefty amount, but it’s not like he was touching the ball per year as much as Rashaad Penny and Bryce Love. Having said that, he’s hardly a “perfect” prospect. My biggest concerns are his inability to reach a top gear once he breaks away. He also doesn’t really have an effective jump cut. On top of that, he sometimes fails to use his size to its full effect (he should do this more often). He gets arm-tackled and goes down easily at times when he can easily run right over linebackers.

Royce Freeman has good size and athletic ability, when he finishes runs like this you can’t help but think he could be a really good three-down back. pic.twitter.com/y9Rxvbo4iw

One AFC Personnel Director said, “I think he might be better than people are going to give him credit for. He was hurt all of last year and they changed up the run scheme which kept him between the tackles. With better blocking in front of him, I’m not so sure that he’s not still that same kid we saw as a sophomore.”NFL.com’s Lance Zierlein compares him to D’Onta Foreman, but I think a more suitable comparison is former Rams RB, Steven Jackson. If you would like more visual examples of what he’s capable of, look no further:

I currently envision Freeman towards the end of my 1st round in rookie drafts. He’s in a similar tier of RBs to Ronald Jones, Kerryon Johnson, and Rashaad Penny in my opinion. You currently see him lower than those names, but post draft we may see him rise to their level. I’d love to see Freeman land beside Luck in Indianapolis.

Nick Chubb’s Knee
Is Richie James a Late Round Steal?