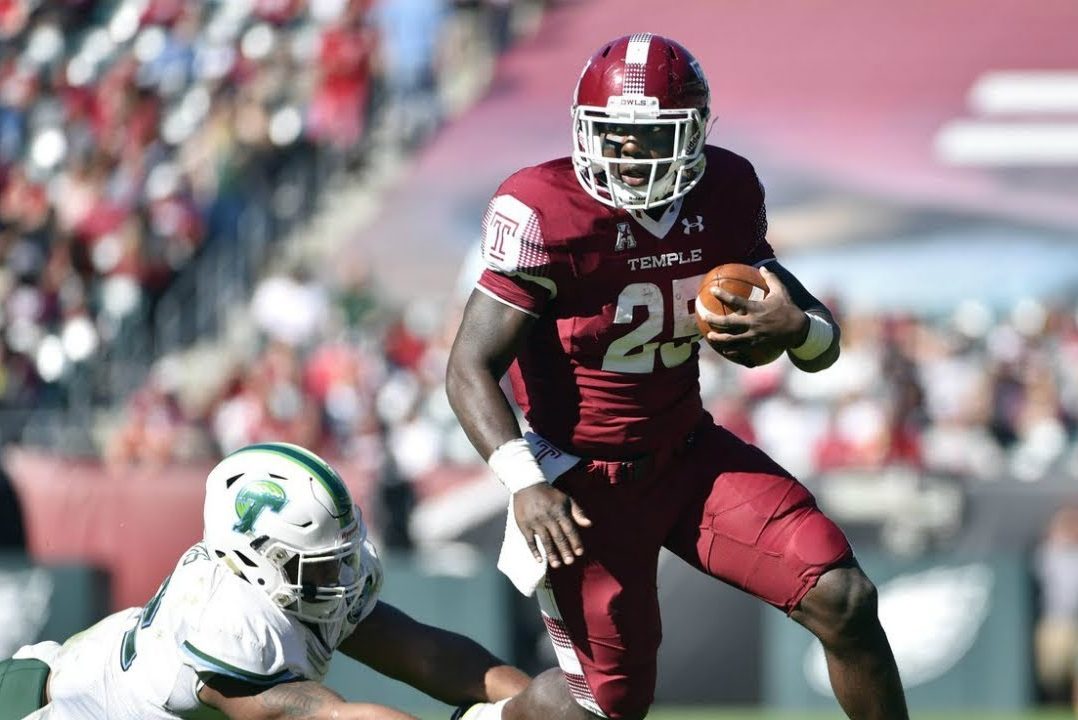 The 2019 class is consistently labeled as underwhelming in regards to the running back position. While this may be true, a few backs do possess the necessary: size, production, and athleticism to be considered a potential bell-cow. Enter Ryquell Armstead, a late round flyer that is receiving very little attention.

Ryquell Armstead was a 3-star recruit from New Jersey that chose to attend Temple University. Armstead checks in at a healthy 5’11”, 220 pounds which equate to an above average BMI. After seeing limited snaps as a freshman, Armstead saw a sizable role as a sophomore. During his junior season, Armstead received the same amount of carries but saw his efficiency dip due to minor nagging injuries. During his final year, he averaged 21 carries per game while averaging 5.2 per carry.

Despite flying under most draft pundit’s radar, Armstead received a senior bowl invite, where he finished as the South team’s leading rusher. Armstead parlayed his success into a combine invite and made the most of that given opportunity. Besides Miles Sanders, Armstead arguably had the best day among the position; running the 2nd fastest 40 times (4.45) at the combine, behind only sub-sized Justice Hill. Armstead also excelled at the twenty-yard shuttle, 3 cone, and bench press, finishing in the top six of each event.

Armstead shows some elusiveness in a multitude of ways. Firstly, he can be characterized as a tough runner. He routinely bounces off would be tacklers and continually keeps his legs churning for added yardage. In an age where most backs look to avoid contact, Armstead is quite the opposite. Armstead was quoted saying; “I run violent. I look for contact — that’s something that makes me unique.” Power is not his only mode of forcing missed tackles, Armstead also displays an effective spin move, and a fast change of direction, causing defenders to take improper tackling angles.

As stated before, Armstead ran a 4.45 at 220 Lbs. This impressive time amounts to a speed score that ranks in the 94th percentile. The last successful trait that Armstead displays is his vision. Armstead is able to quickly identify the hole, and accelerate abruptly He regularly picks the right hole and is able to pound the rock between the tackles. Armstead avoids running east-west and falls forward for additional yards. Once he reaches the second level of the defense, his speed allows him to break long runs. His speed will allow him to run between the tackles and also get to the edge in zone runs. Armstead also shows good versatility while lining up in the slot and also motioning outside. Through four years Armstead posted a modest 29 receptions. Although on film Armstead shows soft hands and the potential to be used on third downs. In order to be considered a true three down back, Armstead will have to gain experience running an expanded route tree.

Armstead was selected as the 2nd pick in the fifth round by the Jacksonville Jaguars. While landing with the Jaguars will cap his upside, Armstead still could be a value. Fournette is clearly entrenched as the starter, but injuries and off-field issues are plentiful and may provide an opening for early-down work within that offense. Based on early ADP, Armstead is currently being selected 46th or a very late fourth rounder in most rookie drafts. If Ryquell develops his pass-catching chops, he could be a steal at his given cost. According to Player Profiler, Armstead compares favorably to Lamar Miller. Miller has been an uninspiring player, but one who has held a starting job for quite some time. With all this information, Armstead is a player I will be selecting toward the end of my drafts.