Undrafted Rookie Free Agents to take a shot on. 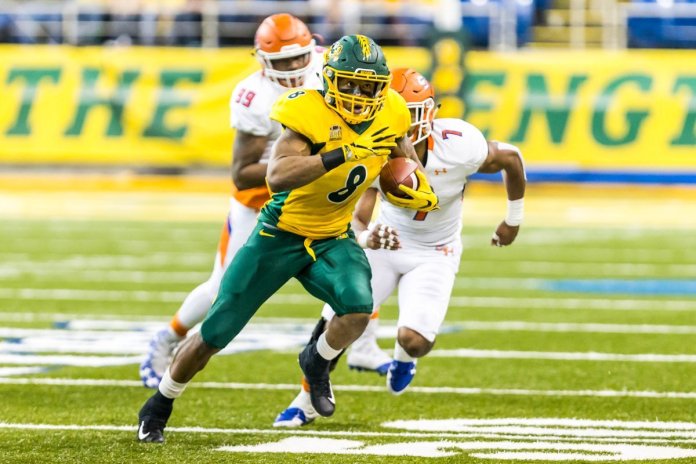 Everyone knows about all of the rookie’s that were picked during the actual NFL draft that will provide you with value and points that may help you towards winning a championship. The purpose of this article is to give you the leg up on your competition when it comes to those who were not drafted and come out of nowhere to help guys win the league. These are your guys picked up from waivers in the first few weeks. This article is meant to give you the leg up on getting them before that happens and make you look great in the minds of your competition when they go searching after week 2 only to find the player already on you roster since May. So here are my favorite Undrafted Rookies that I would target.

Obviously, the hardest of the skill position groups to find Undrafted rookie free agents in to play because QBs get drafted like crazy throughout the draft. These guys are the ones you find that will be the backups to your starters that can produce in a time of need.

Tyree Jackson, Buffalo Bills: Tyree Jackson is an absolute physical beast as a player. He may possess one of the strongest arms in this draft class if not the entire NFL. He joins the roster of the Bills behind another QB in the league with a howitzer for an arm in Josh Allen. While there is no question Allen is the set in stone starter and the new QB face of the franchise Jackson could play well enough in camp to win the backup job. Jackson is a 6 foot 7 249 pound monster who runs a 4.59 40 yard dash. He may have benefited from staying in school another year but Buffalo got a steal of a backup. The best part is Josh Allen and Jackson are so similar that if he does have to come in at QB if Allen goes down then the offense does not need to be modified whatsoever. This is all if he wins that job though.

Brett Rypien, Denver Broncos: Rypien was a good QB at Boise State. Playing on that blue turf field he showed just so-so athleticism but good intangibles and processing. The obvious problem here is he landed on a team with another rookie QB in Drew Lock who was taken in the second round and looks like their future franchise QB. Rypien has what it takes to be his backup but will be nothing more than a QB3 this year with Flacco there as well.

Nick Fitzgerald, Tampa Bay Bucs: Another great athlete but not a great QB. Has the measurements and athletic test scores to get people excited but then you watch him throw and realize he will never be an NFL QB. The reason he makes this list is because of his rushing ability and the offensive mind he falls too. This kid could be the next Taysom Hill if used correctly. Do with that what you wish.

A skill position that regularly produces undrafted rookies who go on to give some teams decent production for a few years before tailing off. Let’s dive into them because I can see a few I already would love to grab late in rookie drafts or off the waiver wire!

Bruce Anderson, Tampa Bay Bucs: Alright full disclosure I did really like Anderson before the draft. Afterwards I was upset that he wasn’t picked. Then found out where he went as a UDRFA and was STOKED!!!!!! Im sorry but Ronald Jones was not the answer there and Anderson has the skill set that Coach Bruce Arians could get behind as well as sharing a first name. I know Peyton Barber is still there as well but come on neither him or ROJO are going to have any sort of grip over the job over with a new head coach. Anderson is the first player from this article I am going to target. Hands Down! As they say in “The Longest Yard” ITS BRUCIE’S TIME TO SHINE!

Karan Higdon, Houston Texans: I liked Higdon’s tape a bit early in the draft process bu fell off at the end a bit. He wasn’t drafted but could end up a player that produces in the right offense. Lamar Miller is not the answer in Houston and regularly misses time. I know Foreman is there but he is recovering from an achilles tear from two years ago and may finally be healthy but that a tough injury to come back from. Alfred Blue is gone and that is the exact role Higdon could step into. A good slashing runner who can produce backup numbers until the starter goes down and then give you output as the fill in. Im picking him up where I can.

James Williams, Kansas City Chiefs: I know there are a lot of RBs trying to fight to get this job from Damian Williams and most likely Damian Williams will keep it in my opinion. But James Williams out of Washington State is a pass catching machine. In some seasons he almost had more catches then runs and displayed the athleticism I like in RBs. In that KC offense with Reid coaching him up he could be a stash. That is if he makes the team.

Alex Barnes, Tennessee Titans: Barnes was a good player heading into this process. Landing spot is very nice in my opinion as Derrick Henry is bound to come back down to earth and Dion Lewis is a strict pass catcher. Barnes should make the roster and could get some snaps here and there this year to display his talent. Could be a solid stash candidate.

Devine Ozigbo, New Orleans Saints: Ozigbo is a bigger back out of Nebraska that produced in the last year. He has tools to be a grinder in this league and NO is a good landing spot at a second look. Obviously Kamara is the feature but they always employ a big back down in NO and I know Latavius Murray is there but I could see Ozigbo making the roster and punching in a few at the goal line.

Elijah Holyfield, Carolina Panthers: I really liked Holyfield…….until he ran the 40 yard dash. OK jokes aside I know he won’t burn anyone and I know Carolina drafted another RB in the draft. But Holyfield can be a grinder and goal line back for them kind of like Mike Tolbert was for a number of years. And Tolbert always had some deep league value. Plus on top of this Holyfield paired with McCaffery has to make this the most jacked backfield of all time.

UDRFA Wide Receivers are not as common to explode onto the scene as Running Backs are but it still happens now and again. The best thing to look for in this category is college production and opportunity.

Anthony Johnson, Tampa Bay: Anthony Johnson was a great WR in the MAC conference. He dominated as a junior before having an injury plagued senior season. Even while battling through injuries he still dominated some games. It really was a surprise that he went undrafted but it benefited Tampa Bay. Johnson could be a steal for Bruce Arians offense and have an opportunity to get some looks in what should be a downfield passing attack which was where Johnson thrived at The University of Buffalo.

Preston Williams, Miami Dolphins: Preston Williams was not allowed at the combine because of awful off-field instances and I will never be a fan of him because of it. That being said he was a player that was dominant at Colorado State. His pro day however was lackluster and for someone with off-field concerns that was enough to slip him out of the draft completely. Lucky for Williams the Dolphins WR core is not what you call well stocked. WIlliams has a chance to carve out a role in this offense. He is a decent late round rookie draft add.

Emanuel Hall, Chicago Bears: Hall is a deep ball specialist or at least that was a lot of his tape while he was paired with Drew Lock at Missouri. Hall has a landing spot that may be a bit cramped in Chicago. The reason he makes this list is that Nagy is a great head coach when it comes to scheming his players open and Hall is a player that could benefit from that. Low volume high yardage could be the name of his game this year. Another late rookie round add.

David Sills, Buffalo Bills: While the Bills offense has been predicated around running the ball I do feel they will be passing more this year. Sills will not rack up the yardage because that is not his game. I do however think that he will play a vital role in their red zone offense as that is his strong suit. Sills could score some good touchdowns this year but also could not make the final roster. A toss up that could provide value if you choose to take a gamble.

Stanley Morgan, Cincinnati Bengals: I liked Morgan’s tape and this was another player that I was surprised went undrafted. Morgan isn’t the best at anything but he is good at multiple things. He could be a WR4/5 for team out the gate and the Bengals are always in search for more offensive firepower.

Ashton Dulin, Indianapolis Colts: Dulin is a favorite for the dynasty communities that loves the deeper prospects. He lands with a solid QB and another great coaching staff. Dulin may be able to get some snaps with the Colts but there are a lot of mouths to feed there.

This is another position group that is very thin in the UDRFA category. Late round tight ends are very common to take chances on but the ones who fall out of the draft are rare to succeed.

Dax Raymond, Chicago Bears: Raymond was a decent college tight end. He needs to develop parts of his game to get open against stronger linebackers and safeties. He will be a 24-year-old TE but could develop into a TE2 for a pro team. Maybe a fill in for backing up Burton or Shaheen if they go down.
C.J. Conrad, New York Giants: Conrad was a good TE for Kentucky racking up 30 catches for over 300 yards and 3 TDs in his senior campaign. Conrad does not do anything special but does everything ok. 81 percent of his targets were caught so he has good hands. If he makes the roster he won’t get many opportunities with Engram there but if Engram goes down he could be an outlet target in shallow crossing routes.