The Unearthing of Tion Green 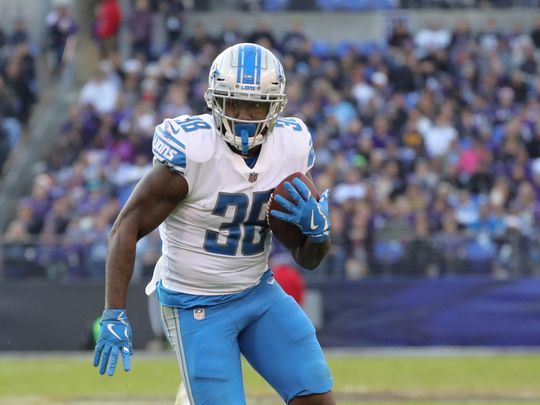 As you may have heard on the latest podcast, Dynasty Matt mentioned that week 13 saw the unveiling of new Lions’ RB, Tion Green.

The Lions’ RB woes have been apparent since the late 90s and the retirement of Barry Sanders. They’ve had a few decent “one hit wonder” seasons out of the backfield since then, but failed to find any consistency. They haven’t had a rusher run for over 100 yards in a game for what feels like an eternity. As a matter of fact, they haven’t had a RB rush for over 100 yards since Reggie Bush on November 28th 2013.

Furthermore, the Ameer Abdullah experiment seems to have failed. He’s clearly capable of breaking off big plays….Only Kareem Hunt and LeSean McCoy have more 20+ yard runs this season than Abdullah. However, he doesn’t look qualified as a feature back and seriously lacks efficiency. He’s only mustered 505 rushing yards all season without much competition, while averaging a measly 3.4 YPC.

In steps Tion Green. Could he be another Dwayne Washington or Zach Zenner? Perhaps. But at some point, the Lions have to hit on someone. Week 13, in the absence of Ameer Abdullah due to injury, Tion Green rushed 11 times for 51 yards and a TD, in his first NFL game against the Baltimore Ravens. In the process, his first NFL carry broke off for a 33-yard gain.

It’s almost a certainty that he was on 99.9% of waiver wires. I’d be surprised if many outside of Ohio have really heard of him. Tion Green was an undrafted free agent out of the University of Cincinnati. The Lions have appeared to be allergic to RBs who are over 5’10” and 200 pounds, but Green measures in at 6’0” and 220 pounds.

It’s no surprise that Green went undrafted. His college performance was far from thrilling. Starting for a lackluster Cincinnati offense, he never eclipsed 1,000 yards rushing. However, the team struggled mightily in his time there due to poor QB play. A breakdown of his college stats can be seen below:

Rumors of Tion Green’s potential emergence have been coming for the last few weeks. Considering the Lions historically only keep 4 RBs on their roster, they must have seen something in him to keep 5.

During week 12, Green was quoted as saying, “”You know I want to play. Everyone wants to play on Sundays. It hurts my heart sometimes when we’re on the goal line. Man, that’s all I did in college. I was 32 for 32 on the goal line.” This was in reference to the Lions’ redzone woes where they’ve barely scored from within the 5-yard line.

This was followed by OC Jim Bob Cooter stating, “He’s been getting better. Been practicing a lot this year, getting a lot of carries. Sometimes that’s with the scout defense versus the first offense, and you see some nice things. I think he’s developing his body a little bit, developing the way he sort of sees and understands the game.”

As you can see from his college stats above, he wasn’t in the rotation during his first couple of years in Cinci. He’s taken the same mental approach now while with Detroit in order to change that situation. Speaking about that, he said, “I was sitting. I wasn’t playing. And I was like, ‘You know what? I’m going to bust my ass. I’m going to go to class. I’m going to do my schoolwork and don’t be a guy who gets into trouble all the time. I’m going to be a guy who gets to everything early. I’m going to work my tail off in the weight room. Take care of my body. Show them I care. Learn from these guys. I mean, it was the same situation, and I’m doing the same thing here.”

Not much from his profile indicates that he would be an NFL success. Only one AFC scout said, “I like him better than some of the backs who were invited to the combine. I’m surprised he didn’t get an invite with his size. He’s got a chance to make it if he can show something on (special) teams in camp.” However, sometimes it only takes one opportunity. The Lions really don’t have much standing in his way. Needless to say, I think that opportunity makes him worth a pickup. Of course, there are other backups out there who are more talented. But there’s also not many backups with such little production ahead of them. Why not give him a shot….