Rookies are always the shinny new toy. Who’s going to be the next Jerry Rice or Barry Sanders? Excitement builds as our hopes and dreams constantly elevate for who we believe to be the next “superstar”. Throughout this series we explore unreasonable expectations in which our imagination allows us to craft. 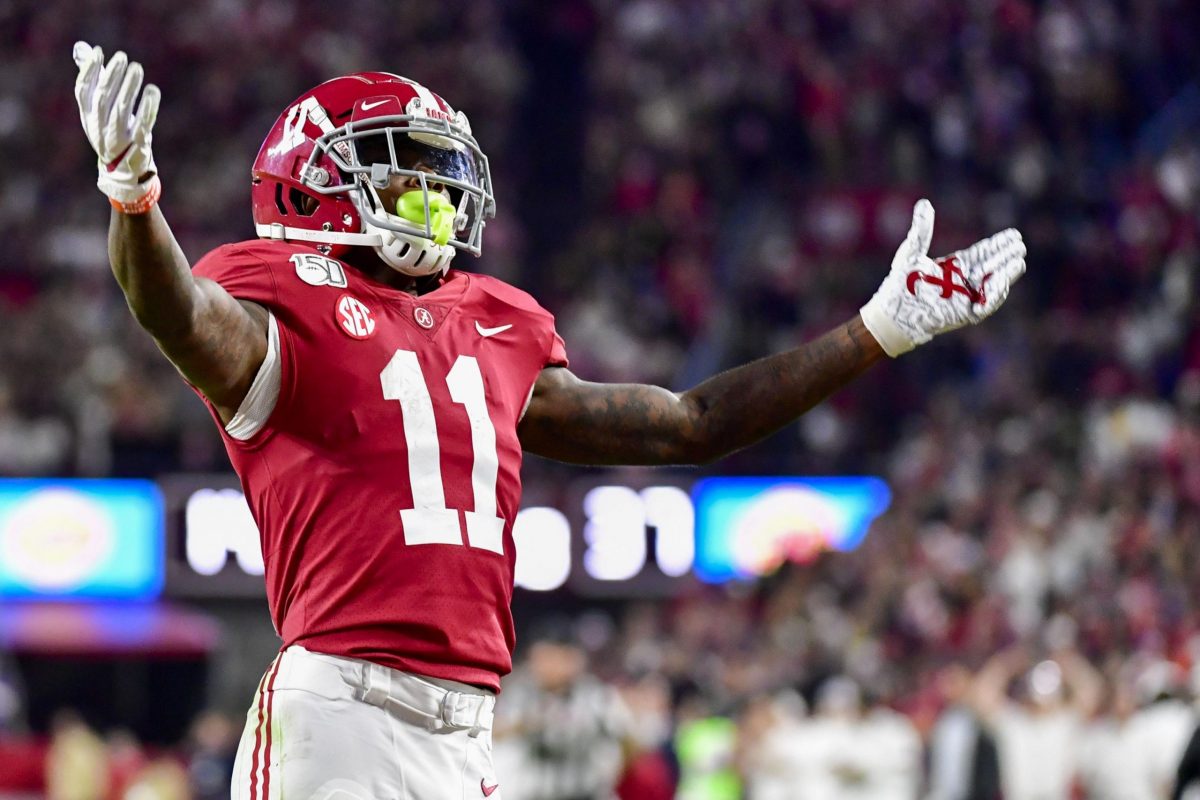 Stop me if you have Heard this One

As I discussed in The Gauntlet of the Late-Round Receiver, 2020 could be an outlier. Very similar to 2014 and 2019, there was an exorbitant amount of wide receivers drafted in the first three rounds. Six in the first, seven in the second, and three in the third. Of those 16, at least ten expected to see a starting role on their offense following 49ers’ Jalen Hurd’s and Bengals A.J. Green’s injuries. The other six are expected to play roles in their offense.

In comparison, only 4 of those 13 receivers drafted in the first three rounds of 2019 had a significant role. At the same time, only Marquise Brown, Dionte Johnson, and Mecole Hardman had multiple unable weeks. If 2020 is anything like the 2011 lockout, we could see the most prolific season in terms of the number of rookies with fantasy relevance.

As I discuss in 2020 COVID vs. the 2011 Lockout, the issue wasn’t the players getting used to the coaches or not having familiarity with the offense, but rather the injuries that occurred primarily because of the lack of time allowed to ramp up and prepare for the season. Although there were only 11 receivers drafted in the first three rounds in 2011, 6 finished with multiple starting weeks. Three of those were opened opportunities because of an injury to a starter. So, who are some of the top three round receivers with a chance to help you win in 2020? We start this three-part article off with the potential record breakers.

No, I didn’t mean targets. I mean receptions. There were five receivers last year with over 100 receptions. The rookie record in a season is Michael Thomas with 92. Thomas did that while playing in 15 games and only starting 12. Odell Beckham was in a similar boat snatching 91 passes in 12 games. It’s easy to imagine both of them breaking 100 receptions if they had started all 16. In other words, a historical performance isn’t likely but is possible.

The first candidate to crack 100 receptions is Justin Jefferson. The Vikings have 93 vacated targets with the departure of Stefon Diggs and the Vikings lack significant receiving depth. Jefferson is currently running with the second team, but I don’t expect that to last long. How does Diggs 63 receptions over 15 games translate over to 100 for Jefferson? The play calling and defense.

What Would Gary do?

In 11 years of offensive coordinator Gary Kubiak calling plays, he only had one year with fewer pass attempts per game than the Vikings had in 2019 (29.2). There were six years where he finished in the top 10. I don’t expect them to just start airing it out, but Kubiak should look to increase his passing attempts as he highlights his love for the play-action.

The Vikings defense was average in yards allowed per game. However, they did exceptionally well in keeping teams out of the end zone. They held opponents to the sixth least amount of points per game. The issue is losing seven players on defense, six of them being starters. They spent a large portion of their draft capital on the defensive side, but it might take a couple of years to see the same stinginess from 2019. As a result, the Vikings should have to pass even more.

I’m not expecting them to lead the league in passing attempts, but if we could see eight more targets a game – they would jump from 30th to 12th in attempts per game. We could see a tremendous fantasy output from Jefferson. If he could command a 20% target share – 1.9% less than Diggs – it would give him 119 targets. With quarterback Kirk Cousins 76% true completion percentage, Jefferson should have 91 receptions. If we take into account, Thielen hasn’t been able to stay healthy in three of the past four seasons with an ankle, hamstring, shoulder, and two back injuries, we could see enough opportunity to vault Jefferson to over 100 receptions.

My next guy who has a shot to eclipse 100 targets shouldn’t be too much of a surprise. He was the first wide receiver off the board in the 2020 draft. Raiders’ Henry Ruggs III with his 4.27 speed might not need 100 receptions to become fantasy relevant. His potential to get there makes him that much sexier.

Looking at head coach Jon Gruden’s track record with receivers is promising. If he has a talented receiver on the roster, he knows how to get the ball in their hands. The better aspect is which type of receiver he favors. In his first stint of his coaching career, Gruden had seven receivers in 11 years, surpass 1,000 yards receiving a total of 12 times. Five of those seven had comparable profiles to Ruggs, although he is far superior athletically. Why am I using receiving yards as a gauge when the goal is 100 catches?

The slot position was created in the 1960s and immediately took off. The receivers’ ability to out-maneuver linebackers and safeties terrorized defensive coordinators for over three decades. Then, the mid-1990’s, defensive genius Monte Kiffin created the Tampa 2 by altering Dick Labeau’s cover 2 zone scheme. The Tampa 2 allowed teams to drop more guys into coverage, patrolling the open areas where the slot receivers used to find open space. This new trend stumped offenses, so they moved their most athletic players back to the outside to get them into single coverage, thus relegating the third receiver on the team into the slot.

Gruden was considered one of the young brilliant offensive minds as he was able to draw up plays which featured downfield receivers in one on one coverage. Of the 12 aforementioned 1,000 yard seasons, there were only 3 in which a receiver averaged less than 13 yards per reception (1 being 12.98). There was no reason to use a slot guy with this downfield success. The slot position was all-but-dead until 2007 when Patriots quarterback Tom Brady and slot receiver Wes Welker found love at first sight. Soon, receivers like Larry Fitzgerald and Victor Cruz would follow suit.

By the time teams like the Patriots started to figure out how to defeat the Tampa 2, Gruden was already in the announcer’s booth, watching these teams pick apart the offenses. As teams got more production out of the slot, defenses started emphasizing getting more talented guys at the nickel, which focuses on stopping the short dump-offs. So what did the offenses do? Started moving their best players to the slot, creating huge athletic mismatches. We’ve seen D.J. Moore, Chris Godwin, and Tyreek Hill excel in this area. Now, insert Ruggs.

What did Gruden Learn While he was Away

Gruden spending almost a decade out of the NFL while having a birds-eye-view might have done him some good. In 2018, Raiders’ Jared Cook was being used to exploit mismatches with the sixth most tight end snaps in the slot. Then in 2019, tight end Darren Waller was being used similarly until rookie receiver Hunter Renfrow broke out in Week 8. Renfrow’s final two games after returning from injury, he had 13 receptions: if extrapolated to a full season, it would be 104.

With Renfrow being a subpar athlete and reports of Ruggs starting the year in the slot, I expect Rugg’s range of outcomes could easily be what we saw from Renfrow over those final two games. With his speed and ability to generate big plays, he could be an absolute monster. Factoring in Derek Carr’s tendency to lock into his two primary targets, it’s not hard to imagine Ruggs smashing his average draft position in his rookie season and setting the rookie reception record.

My last guy might surprise you a bit. The Jaguars quarterback Gardner Minshew is going to be on a mission. The defense is currently being torn down and set up for a rebuild, meanwhile, if the team has another poor season, head coach Doug Marrone is likely out the door. Even if Gardner has a solid season, an early draft pick and a new head coach typically mean a new quarterback. Gardner is going to have to play lights out to retain his starting job in 2021. Swiss army knife Laviska Shenault should be one of the biggest beneficiaries.

Gardner had the fifth-lowest air yards per attempt in 2019 among starters. Shenault, who was used all over the field – including running back where he rushed 42 times for 280 yards – could be deployed as the third-down back for designed plays. The 6’1, 227-pound powerhouse receiver is built more like a running back. His power alone could make him a yards-after-the-catch monster. Additionally, I fully expect him to take over current slot receiver Dede Westbrook’s role.

Westbrook, in the final year of his contract, has been a disappointment. He has the 7th most drops while seeing the 29th most targets for the 86th most yards per reception among wide receivers. The embarrassing thing is his seven drops have come on an average target distance of 6.8 yards, which is 101st. There were only five receivers with a drop who had a lower average target distance; only Albert Wilson had more than three. Shenault – who was injured at the combine – is a superior athlete when healthy and should be the second option in the receiving game.

With Minshew expected to attempt more passes (last year Jaguars attempted 589 combined) and Shenault hogging potentially 20 to 25% of the targets, it’s not crazy to think he could get close to 100 catches. The biggest question is if Minshew can increase his completion percentage. 60% won’t cut it, but if he can push it up to 65%, 30 more receptions could be allocated amongst the pass catchers. 70-80 receptions is where I have him slated, but if there were a group of rookies who could blow up this year, he would be part of it.

The likelihood of cracking 100 receptions is almost unfathomable as thousands have failed with only Anquan Boldin succeeding. Realize the players I mentioned will almost definitely fall short, but still have a chance to do it. If they don’t break 100 doesn’t mean they didn’t add value to your fantasy team. I firmly believe all three of these players will have strong seasons; breaking 100 will just be the cherry on top.

Are you a member of the Nerd Herd? For the cost of a cup of coffee each month you get access to exclusive rankings, extra podcasts, and more. Bundle the Nerd Herd with the DynastyGM tool for just $4.99/month.