Joel Smyth compares the WOPR rating to pre season rankings for 5 key wide receivers who have premium volume incoming for the 2020 season. 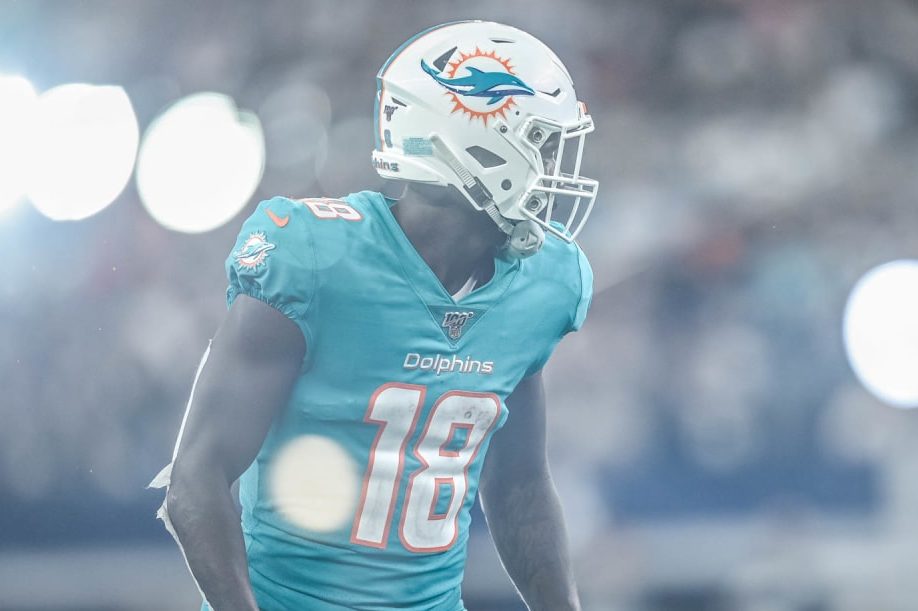 One of the most advanced but intelligent ways to decipher the volume of pass catchers in an offense is by using WOPR (or Weighted Opportunity Rating). Gage Bridgford wrote his article on interpreting this statistic that factors in a player’s share of team targets and air yards. Volume is king in fantasy and usually corresponds with running backs rather than receivers. However, WOPR allows an accurate prediction of how many valuable targets a pass-catcher will continue to receive. In the upcoming season, I have five specific wide receivers who not only have drastic differences in 2019 WOPR and 2020 rankings but also positively increasing scenarios heading into the new year.

The blonde is back, new uniforms are in, and Odell is as confident as ever. An absolute superstar in his first five seasons, averaging over 20 PPR points per game, is now no longer ranked as a WR1 after one poor season. After dealing with injuries and a new team, Beckham is now 100% and has an improved head coach with a better system for his skill set. Not to mention, Baker Mayfield, who has much more talent than Eli Manning ever had in his veteran years with New York, is a near guarantee for a bounce-back season after his sophomore slump. Expect Odell to positively regress to the mean by a heavy amount after a mere four touchdown season on 133 high valued targets in 2019.

The Buckeye duo is set to lead the Washington Football Team offense in 2020 as McLaurin is the only real threat to any defense. I fully expect Washington to be a pass-heavy offense in 2020 compared to the end of the season in which Haskins only averaged 25 attempts per game. Despite having the 9th highest WOPR, Terry McLaurin only averaged 5.8 targets per game last season. This will skyrocket in 2020, especially with the long term chemistry with Haskins and the addition of Ron Rivera as a much-needed upgrade at head coach. Terry has no competition for the foreseeable future, high valued targets incoming, and both the talent and youth to be the perfect buy in dynasty leagues.

The only other receiver besides Terry McLaurin to have a top 14 WOPR with under 100 targets is none other than Stefon Diggs. What does this mean? It means that Diggs’ WOPR is inflated because of the very high valued targets down the field. Now he’s in Buffalo with a strong-armed quarterback and less wide receiver competition. Diggs will undoubtedly be used heavily and often. Allen does have a difference of 5% greater off-target throws than Kirk Cousins. However, Allen will take more shots downfield and again have more attempts than a Vikings’ passing offense. There is risk with the transition to a new team in a short offseason, but I believe it’s a risk I’m willing to take at his current ranking.

With the largest separation between WOPR and season ranking, Williams is ranked 21 spots below his 2019 volume. Quite possibly my favorite buy of the offseason because of his comparison to DeVante Parker. Preston Williams averaged 11.4 ppr points per game as a rookie in 2019 while DeVante Parked averaged 11.5 points per game when playing together. DeVante Parker, who is four years older than Williams, is currently ranked 27th for the season compared to 45th. The main reason for this is the ACL tear Williams suffered mid-way through the season. Yet, Miami beat writer Joe Schad reported that Preston Williams has looked as good as Miami could have hoped for and been a training camp star. All this with Tua Tagovailoa replacing Ryan Fitzpatrick as the quarterback of the future? I’m all in.

Lastly, we have a fan favorite this offseason across the industry with an impressive WOPR to back it up. In 2019 he only trailed fantasy stars Michael Thomas and new Cardinal DeAndre Hopkins. Through 6 NFL seasons, quarterback talents such as Blake Bortles and Mitchell Trubisky have plagued Robinson from reaching superstar potential. With the hope of incoming quarterback Nick Foles starting and Allen Robinson as the clear #1 target, this very well may be the best season of his career with the volume he will receive. Trubisky has gone back to back seasons with 18.4% off-target throws, one of the worst in the league. On the other hand, Foles has thrown lower than 12% off target in both Philadelphia and Jacksonville through 9 games.

Hit me up on Twitter here, let’s talk some fantasy football. The DynastyGM is changing the way you manage your dynasty teams. Find out how your team stacks up against the rest of your league, see which positions you are strongest, and find a trade partner.