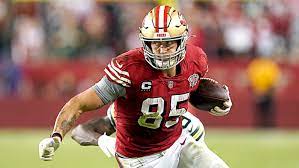 Week 12 of the 2021 NFL season is officially in the books. After a much-anticipated week, there were plenty of fantasy points to go around. While a lot of the points came from the usual suspects, there were many that came from under-the-radar players. Some surprise players rose to the occasion, and some studs turned out to be week one duds.

This is the 12th article in the weekly buy and sell series, where we will look at player trends on Prediction Strike. Which players are trending up? And which are on the decline? We will use this information as an indicator of potential buy candidates and potential sell candidates. Without further ado, let’s dive in and win some championships.

After a disappointing Week 12 tight end, George Kittle saw his Prediction Strike value drop by almost 15%. Playing on 93% of the offensive snaps, Kittle managed to draw just two targets. He turned this into one catch for 13 yards. On top of this, if you take out his touchdown the week prior, it would have been yet another poor performance. Now is the time to buy.

Whether you are a contender or in a rebuild, Kittle is a valuable asset to obtain. He just turned 28 years old and has plenty left in the tank. I believe, based on his recent lack of production and his injury history, you can acquire him at a discount.

On a per-game basis, Kittle is averaging 11.8 points in PPR leagues. This is good for the tight end seven. Playing a position with so much scarcity, having a reliable player like Kittle is a huge advantage. Kittle is a top-five dynasty tight end for me if he can stay on the field. Reach out to the manager rostering Kittle. You may be able to get a solid deal on him.

Logging just eight carries for 16 yards and converting two receptions into 23 yards, Nick Chubb’s Prediction Strike value plummeted by 15%. A small buy window may have just opened. On the verge of turning 26, one may be trying to ship him off before his value takes a hit. Take advantage.

Chubb is still a star running back. In his ten games played this season, Chubb has recorded at least 80 rushing yards in seven of them. Furthermore, this is all being done while never playing more than 60% of the offensive snaps in a single game. Imagine the damage he could do if he got a bit more playing time.

With that said, I would urge only teams contending in the next one or two years to go after Chubb. There is no denying there is a cliff for running backs at a certain age. However, Chubb is not there yet. There is plenty of elite production to be had. I would feel comfortable offering a first and a player for him.

Having a solid Week 12 boosted Gerald Everett’s Prediction Strike value by 20%. Everett has made some noise within the fantasy community by drawing nine targets and turning them into five catches for 37 yards and a score.

He has been a reliable fantasy option since Russell Wilson returned from injury. Whether that’s because Wilson is hampered by the injury still or Everett is just emerging, now is the perfect time to sell. I don’t ever see Everett being a top tight end, so if any of your league mates show interest in him, I would trade him immediately.

Everett is a free agent at the end of the season, so there is always the chance his situation could get worse, and he loses all value. Additionally, even if he remains on the Seahawks, there is no guarantee Wilson is back with the team next season. With so much uncertainty surrounding him, cash out now. I would happily take a third-round pick for Everett.