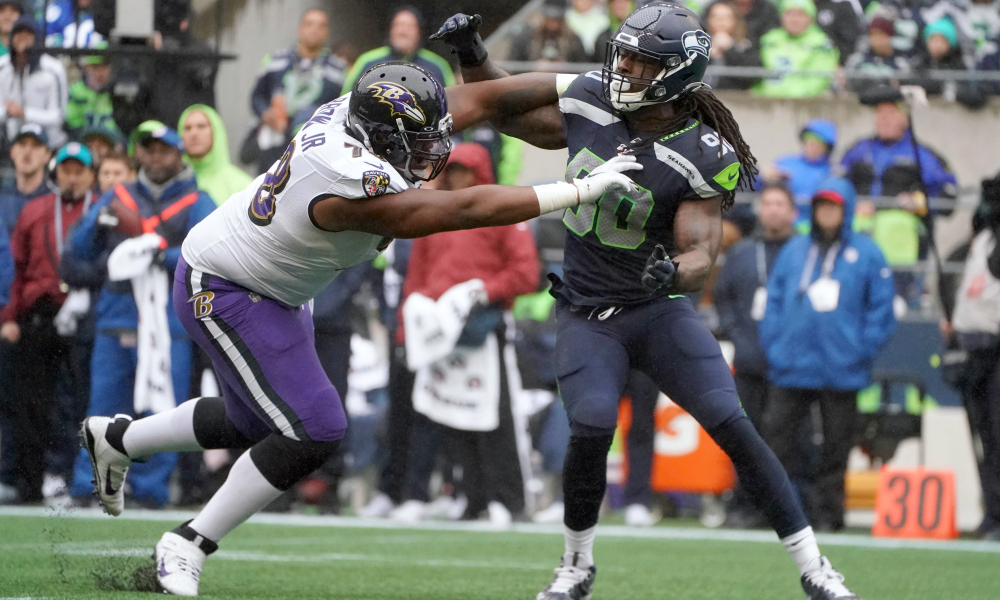 After a one week hiatus, Diamonds or Dust is back. The 2019 fantasy season is quickly coming to a close for many folks and if you didn’t make the playoffs, it’s ok we’ve all been there. If you have already locked up your playoff spot, congratulations the battle rages on! And if you’re fighting for a playoff spot, good luck and give this column a read for some insight and perspective on the IDP side of fantasy football as you make your starts and sits for Week 12. Without further ado.

Seattle Seahawks defensive end Jadeveon Clowney has had a relatively sluggish start to the season. That could be in part due to his late addition to the Seahawks roster in the offseason but that all seems to be in the past. In Week 11 Clowney faced a very stout San Fransisco 49ers offensive line but managed to have his most dominant performance of the season, as well as his best statistical one (5 tackles, 5 QB hits, a tackle for loss, a forced fumble, a fumble recovery, and a touchdown). This single performance accounts for almost a quarter of Clowney’s IDP production on the season. Jimmy Garapalo lost his primary pass-catching weapon, Emmanuel Sanders, early in the game which resulted in him holding onto the ball just a little too long in the pocket more often than not. In Week 12 Clowney faces Carson Wentz who, coincidentally, is also in jeopardy of being without his WR1 Alshon Jeffery. Perhaps he can catch Wentz lingering in the pocket this week as well? His snap share has been between 70-80% for the most part since Week 4. Which is what an IDP manager should look for in a starting DL position. While his floor remains low, Clowney’s late-season breakout game was a breath of fresh air for owners who held on through the tough times.

In the Week 8 edition of Diamonds or Dust, Fred Warner made an appearance in the dust section of the column. At that point in the season, Warner was playing second fiddle to fellow linebacker Kwon Alexander and was not producing at the same level he did in 2018. He had only produced 33 tackles through 7 weeks! In Week 9 however, Alexander suffered a season-ending torn pectoral injury. In the two weeks since Alexander was injured, Fred Warner has posted his two best statistical performances of the season for IDP owners. He’s hit double-digit tackles in each outing as well as posting two sacks and a fumble recovery. It’s hard to ignore the direct correlation but with Kwon being out it appears Fred Warner is back to playing an alpha role on the defense. In Week 12 Warner has a solid matchup against the Green Bay Packers. Aaron Rodgers’s ability to consistently drive down the field should afford Warner and the rest of the 49ers defense many opportunities to score IDP points and Warner, now unencumbered by Alexander looks to keep shining.

The Seattle Seahawks acquired safety Quandre Diggs from the Detroit Lions after Week 7. The Seahawks were struggling to find what they were looking for at the position and the Lions were riding the hot hand of breakout IDP star Tracy Walker. Diggs didn’t play for the Seahawks until Week 10 because of a lingering hamstring injury but when he did hit the field for the Seahawks he saw 100% of snaps. It’s safe to say the injury won’t be an issue since he’s had a bye week to rest since Week 10. The extra week should have given him more time to get comfortable in the system as well. Diggs didn’t have a high tackle game in Week 10 but he did produce a big play by way of interception. Given that Diggs was given the full workload at his position as soon as he was healthy, he’s a sneaky good start in his Week 12 matchup against the Carson Wentz led Philadelphia Eagles. Wentz’s receiving corp is banged up pretty good and Alshon Jeffery may not play, which would suggest an influx of targets over the middle of the field for his tight ends, which could be very good for Diggs owners.

After his breakout game Week 1 against Seattle, where everything went right for Sam Hubbard, almost nothing has since. Hubbard is a second-year player out of Ohio State who showed himself capable in a limited role in 2018 posting 39 tackles and 6 sacks on 45% of defensive snaps. His performance in 2018 was enough to solidify his role as the primary pass rusher for the team in 2019 and he has held that role so far playing 84% of the team’s defensive snaps on the season. Unfortunately, this increase in snaps hasn’t netted the same efficiency his 2018 campaign saw. Through Week 11 Hubbard has 49 tackles and 3 sacks. This sounds great until you realize 10 of those tackles and 2 of those sacks came all the way back in Week 1. Yikes. Hubbard in a dynasty setting is still a great player to own as he’s young and capable. The Cincinnati Bengals are looking at a high draft pick, possibly #1 overall in 2020, and could draft fellow Ohio State defensive end standout, Chase Young. If that were to happen he and Hubbard could become one of the better DE tandems in the league and Young could soak up some double teams. In the meantime, in Week 12 Hubbard goes up against one of the better offensive lines in the league as he takes on the Pittsburgh Steelers. It’s hard to start Hubbard as anything but a DL3 or low-end IDP flex in this tougher than usual matchup.

In his Week 7 matchup against the Philidelphia Eagles, Leighton Vander Esch sustained a neck injury that forced him to miss his first career game against the New York Giants in Week 9. He came back from injury in Week 10 against the Minnesota Vikings and played well, posting his highest tackle game of the season. He also played Week 11 against the Detroit Lions and everything seemed fine. Unfortunately, during practice on November 12th, he reaggravated the injury in some fashion. Vander Esch underwent an MRI on Thursday and was quickly downgraded to doubtful for his upcoming Week 12 matchup. On the off chance that he does manage to be active for this game, he’s a must bench based on the nature of the injury and the timeliness of the reaggravation. Potential replacements could be Sean Lee of the Dallas Cowboys, Dre Greenlaw of the San Fransisco 49ers, Nick Kwiatkoski of the Chicago Bears or Mychael Kendricks of the Seattle Seahawks, depending on the depth of your league.

In Week 12 Malcolm Jenkins and the Philadelphia Eagles take on the Seattle Seahawks. Jenkins has long played the traditional strong safety role and in 2019, he hasn’t missed a snap. One would think this would make him an excellent start candidate week in and week out, but the reality is Jenkins is having a slow year. He’s averaging less than 5 tackles a game on the season. Jenkins isn’t necessarily known as a high tackle producer throughout his career but with the disarray at linebacker in front of him, he looked set up to have a good IDP season. That hasn’t come to fruition. Jenkins is a low-end DB3 in Week 12 against a crisp Russell Wilson led offense.

Hopefully, you learned something about the upcoming week you didn’t know that will help you win Week 12. As the season starts to wrap up hopefully you continue to stay up to date with all things IDP fantasy football by giving the twitter handle @50shadesofdrunk a follow and be sure to check out the IDP focused podcast The IDP 411 and The IDP Hour which both put out weekly content during the season that is loaded with information and analysis you can’t find anywhere else.