Depth is as important as ever in 2020 with COVID and injuries. In this article, I discussed 5 high upside players to stash on your dynasty bench to aid your team’s depth! 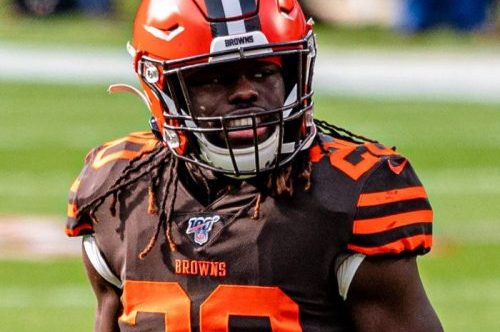 The NFL had a couple of scares this week, but it seems to be getting into a groove! We only had the Steelers vs. Titans game canceled in week 4, even with Cam Newton catching COVID and everyone having a scare with a Saints player having a false positive. Through all of this, we are realizing the importance of depth in 2020. It is essential to be always adding high upside players on a weekly basis! In this article, I will be talking about five dynasty adds to stash on your bench!

D’Ernest Johnson is my top dynasty add for week 4! Johnson has walked into being the RB2 for the Browns for at least the next 3 weeks because Nick Chubb is on IR, potentially longer if Chubb misses more time. Also, Johnson out-touched Kareem Hunt by 2 attempts and was RB32 in week 4. If you lost Austin Ekeler, Nick Chubb, or any other RB this season, I would spend 60% of your FAAB on Johnson. If you want more depth, I would spend 40% of your FAAB.

Richard Rodgers is the TE2 for the Eagles, and he deserves to be on a roster. The Eagles have the most targets to the TE out of any team through 4 weeks, and in week 4, Rodgers only had 1 less target than Zach Ertz (4 targets). Rodgers is a great depth piece for any TE premium leagues or teams in any format struggling with injuries. In a non-TEP league, I would add Rodgers with 1-3% of my FAAB. In a TE premium league, I would spend 5-8% of my FAAB on Rodgers.

Dontrell Hilliard is the cheaper Browns RB to add in dynasty. Hilliard is an add because he had 2 out of 6 of the Browns red zone carries in week 4 (Kareem Hunt had the other 4). Also, Hilliard had the lone target for the Browns RBs. If anything happens to Hunt or Johnson, Hilliard has a top 24 RB weekly upside. I would spend 1 to 3% of my FAAB on Hilliard as an end of bench stash that I am fine dropping if someone better shows up.

Parham is a super deep add, especially for TE premium, and start 2TE leagues. He only played one snap in week 4, but that snap was a TD reception for 19 yards. Parham was an XFL standout who signed a 2-year deal this offseason with the Chargers. He is also an add because he could be the TE of the future if the Chargers let Hunter Henry go after 2020. Parham is a MUST add for deep TE premium and start 2TE leagues, and I would spend 5% of my FAAB in those leagues. He is a solid stash in non-TE premium league, but I would only spend 1% of my FAAB.

The final player to add is on everyone’s waiver wire! Jeff Smith had a fantastic week 4. He had the same amount of receptions as Jamison Crowder (only 1 less target). Smith can help your team’s depth during these trying times! Also, Jeff Smith is a decent athlete, so he has the potential to be the WR2 over Chris Hogan until Mims is back. I would not spend any FAAB on Jeff Smith, and I would add him if you still have retired players on your bench or any open roster spot.

Truth or Trap: Justin Jefferson’s Explosive Performance
The Lingering Question: When Christian McCaffery Returns, What Will Happen to Mike Davis?