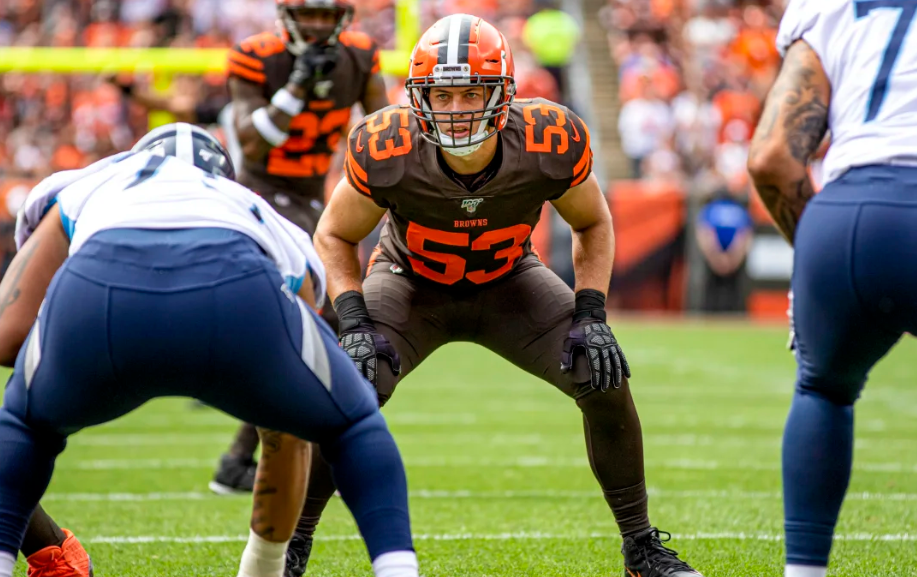 Coming into the season many IDP players were aware of Joe Schobert’s presence. He was never discussed as a high-end option but as a lower end LB1 if he could keep his job. Now that there have been five weeks of football played it’s easy to see how overlooked Schobert was and overhyped the Browns were. The offense has struggled mightily to move the ball and this has resulted in the defense playing a ton of snaps. On top of those snaps, the defense as a whole hasn’t been as potent as one would hope with the likes of Myles Garrett and Sheldon Richardson anchoring the defensive line. All this has accumulated in Schobert being a top 5 linebacker for IDP through the first 5 weeks. His stat line is quite impressive with 54 combined tackles, 38 solo (which leads the league), a sack, a forced fumble, and one fumble recovery. To date, he has been a more reliable option than superstar linebackers such as Bobby Wagner, Luke Kuechly and Leighton Vander Esch. Joe Schobert is having an incredible IDP season and is on pace for well over 120 combined tackles with his job and role completely secure. In Week 6 he takes on the Seattle Seahawks and should be in line for more elite production. If you don’t know, now you know.

Once considered a top 5 IDP linebacker, Deion Jones has had a less than ideal fall from grace. Through 5 games in 2018, Jones posted a stat line of 49 tackles, a sack, 2 interceptions, and 2 double-digit tackle games. Through 5 games in 2019 Jones has 39 tackles, and 1 pass defended. No sacks. No interceptions. Not exactly the pace you want from a former Pro Bowl linebacker. Not to mention he was only averaging 78% of snaps the first two weeks of the season. But there is hope! In Week 5 against the Houston Texans, he recorded his first double-digit tackle game of 2019 (11) and it’s important to remember he is coming back from a torn ACL injury. He has shown flashes of elite sideline to sideline speed in recent weeks and has the perfect breakout opportunity in Week 6 against the Arizona Cardinals. If you can buy low on Deion Jones now is the time because he has all the makings of a diamond in the rough for 2019 now that he appears healthy and is playing 99% of snaps consistently.

What goes up must come down. Or something of that nature. Thomas Davis was riding high as the Los Angeles Chargers seemingly only healthy and competent linebacker to start the season. His season started on fire with 26 tackles through the first two games of the season. Unfortunately, in the last three games, he’s only combined for 15 tackles. To go with the drastic drop in production Davis has also seen his playing time dwindle down from 100% of snaps the first three weeks to 79% and 66% the last two weeks. This downward trend coupled with the fact that the Chargers face off against a sluggish Pittsburgh Steelers offense in Week 6 makes him a bench candidate. Drives will die early and often in this game for the Steelers and Thomas Davis looks to play only a small part in it. Start at your own risk but an LB4 floor is a harsh reality you may endure.

The Jacksonville Jaguars extended Myles Jack to the tune of four years, $57 million with $33 million guaranteed in the off season to be a cornerstone piece for their defense, as well as a leader in a tumultuous locker room. He repaid them by being ejected from the first game of the season for throwing a punch at Kansas City Chiefs wide receiver Demarcus Robinson. He had two solo tackles in that game. His only production. Since then he has yet to produce a double-digit tackle game this season and has left a game with an injury. It’s very hard to trust Jack given his lack of production and his seeming inability to stay on the field. For IDP purposes he’s been out produced by rookie Quincy Williams. While the talent, draft capital, and contract are all there the production for your fantasy team hasn’t been. Maybe the shoes left behind by Telvin Smith are just a bit too big to fill. Maybe the locker room drama with Jalen Ramsey and Yannick Ngokoue has caused him to phone it in. Regardless, any starting inside linebacker with a contract of his size without meaningful IDP production to back it up should give anyone pause. He faces a resilient New Orleans Saints team in Week 6.

In 2018 Antione Bethea finished the fantasy season the DB2 behind only Jamal Adams. He did it on the back of 120 combined tackles. Those are solid numbers from a linebacker in IDP. They’re tremendous numbers for a DB. So far in 2019, he’s doing much of the same. Producing a high number of tackles on a weekly basis to the tune of 40 stops in 5 weeks. He’s eclipsed double-digit tackles twice on his new team the New York Giants in 2019. Something very few DB’s can claim this early in the season. A proven veteran and a proven IDP commodity with 7 seasons of over 100 tackles, Bethea should be started everywhere when he’s healthy without hesitation.

One of the best IDP defensive backs thus far in 2019, Jabrill Peppers makes his hay in a different way than teammate Antione Bethea. While he does have solid tackle numbers through 5 weeks (30), Peppers is truly an elite athlete and provides big-play potential in a way a 36-year-old veteran may not. Peppers has already scored a pick-six this season and forced a fumble. He’s on pace to blow his 2018 IDP production out of the water, largely in part because he’s seeing a lot more playing time in New York than he did in Clevland. He should have plenty of tackle and big-play opportunities as he takes on a beat-up New England Patriots offense on Thursday Night Football.

Last week Budda Baker made the diamond list. He’s been an extremely productive defensive back for IDP since the start of last season. He’s still seeing nearly 100% of snaps and his defense is still playing a ton of snaps. Unfortunately, in Week 5 he saw his time played at safety take a big hit as he was called upon to play more nickel cornerback. This means he will be playing off the ball less and this leads to fewer tackle opportunities. He’s still playable but until the Arizona Cardinals recommit to him as a safety, his IDP value takes a hit.

Many IDP fantasy managers got a solid return on Bradley McDougald in 2018. He’s never been a huge tackle producer though and owners were bailed out last season when he had 3 forced fumbles and 3 interceptions. He’s on pace to match his 78 stops from 2018 but unless you’re in a deeper IDP league or struggling with bye weeks, McDougald has a cap on his production. In Week 6 the Seatle Seahawks will face Baker Mayfield and the Browns. The Browns have looked very bad offensively this season aside from a solid run game. Facing an offense that has had trouble keeping drives alive is not the ideal situation for a player who is barely averaging 4.5 tackles a game. While the sloppy play of the Browns does add some intrigue for McDougald to make a splash play, it’s still not enough to love putting him in your lineup in Week 6.

Rooke defensive end Josh Allen has had a fantastic start to his career. Through his first 5 games, he’s posted a stat line of 18 tackles, 3 sacks, and 2 forced fumbles. That’s good enough to be a top 10 defensive lineman and nobody is talking about him. Allen falling to the Jaguars was not something any draft pundits anticipated. He was projected as a top 5 pick but for whatever reason, he slipped to the Jaguars at number 7. In Week 6 he does play a tough New Orleans Saints offensive line that has only allowed 8 sacks on the season but fantasy managers should be elated at the top end production Allen has given so far. To date, he trails only Calais Campbell on the team in defensive line snaps played at 77% while Campbell as played 80%. With his tremendous talent and opportunity, he’s a must-start in Week 6.

It’s been a slow start to the season for edge rusher Von Miller. He’s only posted a quarterback hit (4) in one game. That’s also the only game he posted any sacks (2). Yikes. This is all in the past though and we are looking to the future. It literally couldn’t be brighter than in Week 6 when Miller takes on one of the worst pass protection offensive lines in the Tennesse Titans. The Titans have allowed the second-most sacks in the league (22) behind only the New York Jets (23). This is a home game for the Broncos and anyone who paid attention in the offseason knows that Miller’s goal for 2019 was a 20 sack season. While he’s had a slow start, this is a perfect matchup to get his mojo back and get his statistical season turned around. Anticipate him taking full advantage of the opponent’s weaknesses along the line and roll him out in your lineup Week 6 with confidence.

Defensive lineman Kenny Clark has been a bit of a disappointment to IDP fantasy managers this season. Through 5 weeks he only has 4 solo tackles. While he does have a combined total of 18 tackles it’s still a less than ideal. In the offseason, the Green Bay Packers signed two pass rushers Za’Darius Smith and Preston Smith to help Clark along the defensive line. Both Smiths have started the season off very well and have been extremely fantasy relevant. Unfortunately, this has left Clark with minimal IDP production. To his credit Clark has played 84% of all defensive snaps, trailing only Preston Smith (86%). The snap percentages alone make him a viable weekly starter but in Week 6 Clark takes on the Detroit Lions who have only allowed 7 sacks this season. If better options can be found it’s time to give Clark, and your lineup, a break.

Aaron Donald has been completely abysmal for IDP this season. He has 13 tackles and 1 sack through 5 games. Some say he’s just starting slow but if your fantasy playoffs start in Week 14 like most folks, with a tiny bit of embellishment, the season is half over. Donald is BARELY a top 50 defensive lineman through 5 weeks. In Week 6 he faces divisional rival the San Francisco 49ers. The 49ers have the second-best ranked offensive line for pass protection and have allowed Jimmy Garoppolo to be sacked only 4 times all year. That’s the lowest number of sacks taken by a starting quarterback this season. If you haven’t already moved away from starting Donald this week the matchup is about as bad as it gets. It might be time to stray from conventional wisdom and adjust your expectations and perhaps your roster.