Are you down with IDP? @50shadesofdrunk brings you the IDPs you should play and those you should not!! Get on it!! 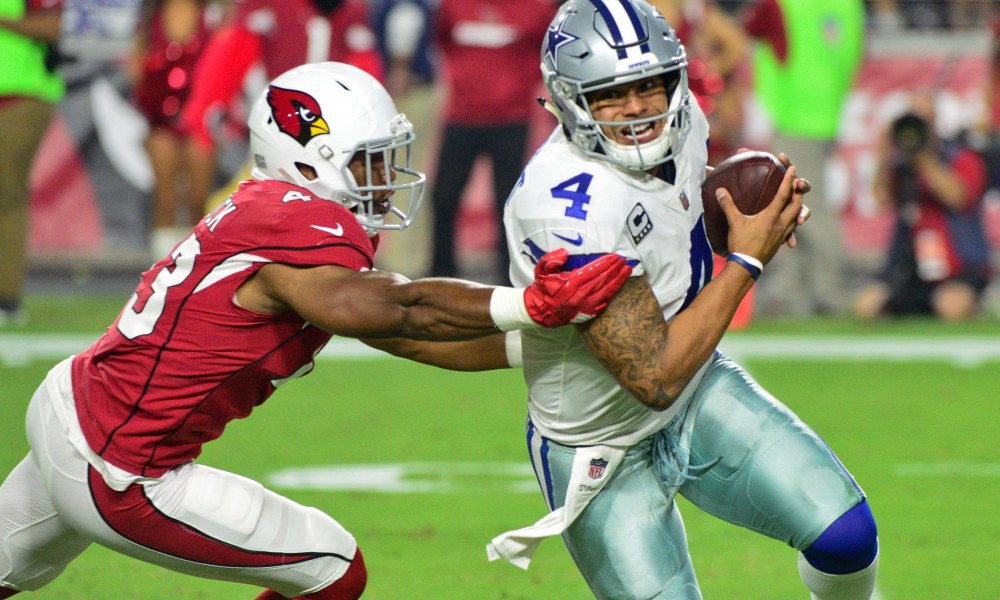 Since being drafted in the first round by the Arizona Cardinals in 2017, Haason Reddick has been a less than stellar IDP option. Compiling only 112 combined tackles across 32 games. That all changed in 2019 though. His current 16 game pace is 118 combined tackles. Coming into the season Reddick injured his knee during training camp and missed some time. This made him a cheap commodity to acquire during the draft season but if you took the plunge or found him on waivers you have been reaping a very positive return on investment. He gets a quality IDP matchup against the New Orleans Saints on the road in Week 8.

De’Vondre Campbell has been a pleasant surprise for IDP fantasy managers this season. Since the start of the season, he’s accumulated 63 combined tackles. This puts him in the top 5 for tackles at the linebacker position and he’s done it relatively quietly. While there was some doubt about his role coming into the season with Deion Jones returning, he’s on pace for his best statistical season and well over 100 tackles. A quality LB1 start in all formats.

In his second season in the league, Cincinnati Bengal’s safety Jessie Bates is back up to his old tricks. He set the bar high his rookie season with over 100 tackles but is on pace for 120 this season. He offers an incredible amount of consistent IDP production and consistency at a position where 1-2 extra tackles can really make a difference. In Week 8 Bates gets a juicy matchup against a pass-happy Los Angeles Rams offense that has more or less abandoned the run this season. He should be in line for plenty of work and unless he’s injured in the game is a lock for 100% of snaps. Keep cashing in.

In Week 8 Tyrann Mathieu faces a hot Green Bay Packers team on Sunday Night Football. This has all the earmarks of a high scoring game with both back end defenses being a bit suspect. While Mathieu hasn’t had a huge season he’s been a consistent IDP option as a DB2. Mathieu has 34 combined tackles, 5 passes defended, 1 sack, and 1 interception. Solid production overall with some big-play upside. The Kansas City Chiefs had their best performance as a unit in Week 7 which could be indicative of things to come. And Mathieu is an undeniable leader on that squad. Not an absolute must start but you could do much worse.

The Pittsburgh Steelers defense has been incredible this season and TJ Watt has been a big part of that. An unquestioned leader on the team and one of the league’s leading sack artists, in Week 8 he faces a meek Miami Dolphins offense that’s prone to turnovers and has one of the weakest starting groups of offensive players in the entire league. The Steelers defense is a HOT streaming option in most of your standard leagues and TJ Watt’s presence is a big part of that. To date he has 20 tackles, 7.5 tackles for loss and 4 sacks and 3 passes defended. He also has some big plays including an interception, a forced fumble, and 2 fumble recoveries. In this super plus matchup, you would be ill-advised to leave him on your bench.

This one will be short and sweet. Shaq Barret has been having an incredible season. Though he failed to produce a sack in his last two matchups he’s still tied as the current sack leader in the NFL with Myles Garrett (9). Even more impressive, he’s still in the top 3 IDP scorers across all positions. That’s including the two zero sack games and his bye week. He faces a bottom-three offensive line in Week 8 against the Tennessee Titans. Yummy.

Fred Warner had a tremendous rookie season in 2018 posting 124 combined tackles after being thrust into a starting position due to injuries around him. While many fantasy managers, myself included, thought he was on tap for another great season, Warner has been a letdown so far. Through 7 weeks he’s only managed to produce 33 tackles which put him on pace for less than 80 tackles this season. He’s an ok bye week play or an LB4 at best until he shows a bit more of the firepower he possessed as a rookie.

Khari Willis has been seeing playing time the Indianapolis Colts largely due to injuries to the other starting safeties. Malik Hooker had knee surgery in September after suffering an injury against the Atlanta Falcons. In the meantime, Willis has posted 20 tackles and been an ok fill in as a DB3. Hooker had his first full practice this week since his surgery though and appears primed to take back over his starting spot. While Willis may still see some snaps he’s an easy fade this week against the Broncos given the circumstances.

Since being traded to the Miami Dolphins in Week 3, Taco Charlton has been somewhat fantasy relevant for the first time in his career. He’s posted 3 sacks and 15 tackles in the 4 games he’s suited up for the Dolphins which is very serviceable production. Unfortunately for him, he faces a top tier Pittsburgh Steelers offensive line in Week 8 that’s allowed a league-low 5 sacks. Even though Charlton has a first-round draft pedigree to back him up, he hasn’t earned the right to be a plug and play player by any means and given the negative matchup he’s an easy player to sit unless you are in a super deep IDP league.