How will D’Andre Swift play against Florida? Find out who else @tristancook_ says you should be watching on this busy Saturday! 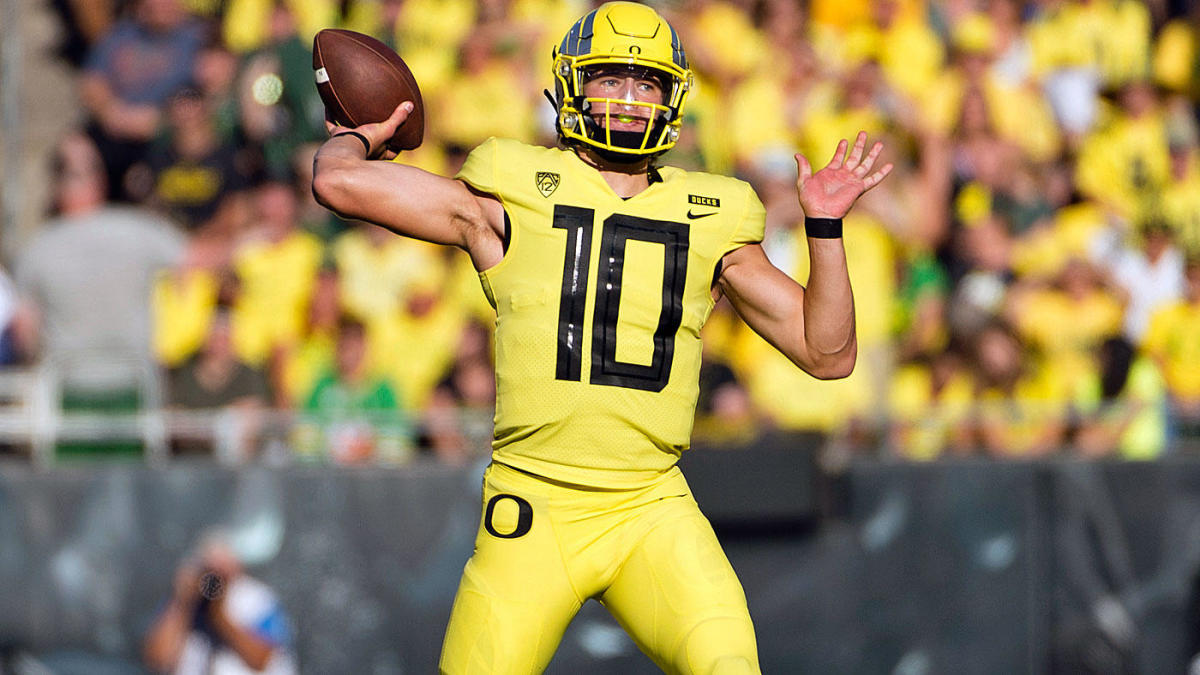 We’ve reached week 9! If you’re new to this article, the goal is to bring you the top dynasty prospects to watch in nationally televised college football games. It’s never too early to take a look forward. Who are going to be the sleepers of upcoming rookie drafts? Check back here every week for my ‘Who to Watch’ series before you head into the weekend. Use this article each week as a place to refer back to as you get ready to watch each game.

Martinez came into the 2019 season with hopes of elevating team and his draft stock with a strong sophomore season. Unfortunately, his Cornhuskers have stumbled to a 4-4 start, which is actually a 2 more wins than they had at this point last year. Martinez is coming off a knee injury, so it will be interesting to see how that impacts his ability to use his legs.

JD Spielman is Nebraska’s home run threat. With the speed and quickness that he possesses, Spielman is a risk to score every time he touches the ball. He’s likely to be a mid-late round NFL pick, but could end up proving to be valuable. In rookie drafts, I’d look for him in the later rounds as a taxi squad player.

Rondale Moore is going to be in the conversation for the top pick in 2021 rookie drafts. If you aren’t familiar with his name now, you will be soon. Unfortunately for anyone that is a fan of college prospects, Moore suffered an injury against Minnesota earlier this year. Jeff Brohm, his coach, has reported that he still has “a ways to go” before he will return to play. The good news for us is that he isn’t eligible until 2021 anyway, so we will get to watch him all year in 2020.

Hopkins is going to be one of the names thrown into the discussion for top-tier TEs in the 2020 class. We have seen some amazing TE classes over the last several years, however Hopkins is not quite on that level. I think he can produce in the NFL, but we will see to what extent.

One of the biggest crimes against the college prospect community is watching Jalen Reagor suffer through sub-par QB play. He’s a dynamic player that makes you hold your breath whenever he touches the ball. The only problem is that TCU struggles to give him opportunities to make plays. He should still be picked around the end of the first in rookie drafts, and could end up being a value there..

I’ve mentioned Darius Anderson’s name a few times in this article. I think that he is going to be a late round lottery ticket at best. He doesn’t necessarily have any elite-level abilities, but he does almost everything pretty well. His NFL potential will be determined by where ever he ends up landing.

Chuba Hubbard seems to move up my draft board every week. He’s an explosive back that can take any run to the house. He had been going in the early 2nd or late 1st of rookie drafts, but I don’t think he’ll be available there after the NFL draft. He’s one of my favorite players in this class.

The other OKST player to monitor is Tylan Wallace. Unfortunately for us, he reportedly tore his ACL in practice this week. His season and possibly career as a OKST Cowboy could be over. He’s eligible to declare after this year, and may choose to do so. If he chooses to return to Stillwater for his final year, he’ll probably be a mid-late 1st round rookie pick. I hope he’s able to return without any concerns, he’s fun to watch.

As of right now, the 1.01 pick for 2020 is likely D’Andre Swift. Swift is slightly undersized for the “prototypical” RB, but aside from that, there are very few knocks against him. He is facing a good Florida defense, so this will be a good test for him. Georgia seems to churn out RBs year after year, and Swift looks like he will be the next star RB from the Bulldogs.

Similarly to Swift, Fromm will be tested by this Florida defense. He is pretty firmly in the 2nd tier of QB prospects in the 2020 class. There is a chance that through strong performances and the pre-draft process that Fromm will elevate his draft stock to be on par with Tua and Burrow, but as of now he is significantly behind them. There’s also a chance he returns to Athens. I’d say it’s low, but there’s a chance.

As I’ve mentioned before, Zamir White is another 5-star RB to go to Georgia and suffer a gruesome knee injury. He’s on the road to a full recovery, and is seeing some limited action this year for Georgia. He was #1 RB recruit coming into college before his devastating knee injury kept him off the field in 2018. We likely won’t see much of him at all, but he’s got all the talent in the world and could be in contention for the top pick in 2021 rookie drafts.

Perine has been the main guy for Florida in the running game in 2019. He has some potential as an NFL prospect, but I think his ceiling is somewhat limited. I’ll be interested to see how he does against this Georgia defense in a top-10 matchup.

When Florida airs out the ball, Van Jefferson, a former 4-star Ole Miss transfer, will be one of the names to monitor. Florida spreads the ball around pretty well, but Jefferson has had a few nice moments in 2019, so keep an eye out for him.

When Utah has the ball, look for #2 to be involved early and often. Zach Moss is the Utes best player on offense and has done an admirable job handling the added attention from defenses. The Huskies are one of the better teams in the Pac-12, so this will be a good test for Moss. I think Moss will likely be a 2nd-3rd round rookie pick, and depending on landing spot could carve out a role in the NFL.

I’ve mentioned Eason’s name several times this year, and it’s because he’s likely to be in the discussion as an early round NFL pick. He has a cannon for an arm, and the physical tools that GMs covet. The biggest question with him has always been if he can develop enough to be a good NFL QB. Only time will tell, but he’ll likely get a chance.

One of the guys that Eason will be throwing to is Hunter Bryant. He is a nightmare for opposing players with his combination of size and speed. He is one of my top receiving TE prospects in the 2020 draft, and he could end up as the best TE in the 2020 class. He looks like a big WR that is able to dominate defenders. Watch out for #1 for the Huskies.

For Vandy, RB Ke’Shawn Vaughn is who I will be watching. He has great quickness in and out of his cuts, and has shown great vision at times. He is a former 4-star recruit and has been steadily rising up draft boards. I think right now he’s a mid 2nd round rookie pick, but if he lands somewhere like KC, his name could shoot up draft boards.

The other Commodore I’ll be watching intently is Jared Pinkney. He’s a part of the group of top-tier TE talent in the 2020 class. Pinkney doesn’t have the biggest role in this Vandy offense, but he has the size and skills to translate to the NFL. I’ll be interested to see what he runs at the combine.

For South Carolina, keep your eyes glued to #89. Bryan Edwards is a sneaky name to sneak into the 1st round of rookie drafts. I was high on him going into the 2019 pre-draft process, but Edwards decided to return to school. He should be a popular name as draft season heats up. Also, if you have yet to see his catch against Tennessee, I strongly urge you to look it up, it was a thing of beauty.

Another week, another time to mention Justin Herbert. I have been encouraged by what I’ve seen so far in 2019 for him. There were some, including me, who said it was a risky move to come back to Eugene for his senior season, but Herbert has so far shown some development and his draft stock is still in a good position. Look for him to have a tough test on the road in a tough environment at USC.

The Trojans have a trio of future NFL WRs to deploy against this Ducks secondary, the first of which is Tyler Vaughns. He is a physical WR that is tied for the team lead in receptions, and is second in yards and TDs on the season. Vaughns has a lot left to be determined through the upcoming draft process, but he’s shown elite potential at times.

The next WR is an even more physically imposing player, Michael Pittman Jr. At 6’4 and 220 lbs, Pittman is extremely difficult for college corners to cover. Look for USC to get him the ball in jump-ball or goal line situations. He does have other aspects to his game though, he is leading the team in catches, yards and TDs. Look out for #6!

A guy to keep on your radar for the 2021 draft is Amon-Ra St. Brown. He is a very dynamic player that is unlike the two aforementioned WRs in that he relies more heavily on speed and quickness. Vaughns, and to an even larger extent Pittman, use physicality to win down the field. Amon-Ra is more likely to juke a defender and be wide open that out-muscle someone for a catch.

That’s it for this week’s games. I will be previewing a handful of players each week going forward. As I previously mentioned, if there is anyone you’d like me to take a look at, or want to share your thoughts on anything dynasty related, hit me up on Twitter (@tristancook_). Also, check out tape on some of these guys in the Dynasty Nerds Film Room. It’s an amazing tool that I plan to take full advantage of.