Who should you be scouting for your dynasty team? Find out who @tristancook_ says to monitor in the weekly prospect watch! 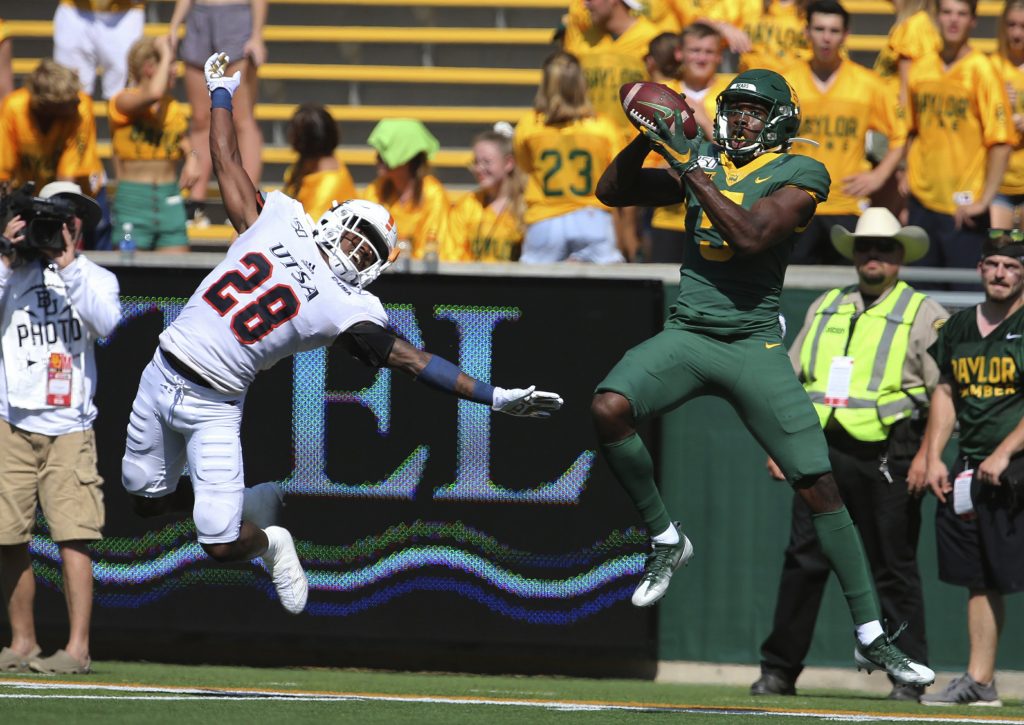 We’ve made it to week 13! Now is the time where many dynasty owners start focusing in on who they want to target in their upcoming rookie drafts. The goal of this article is to help with that process. My aim is to bring you the top dynasty prospects to watch in nationally televised college football games. We are rapidly approaching the end of the college football regular season. And, with that comes the best part of playing dynasty fantasy football, ‘Draft SZN’! Hopefully this article will give you a leg up on your opponents, so check back here every week for my ‘Who to Watch’ series before you head into the weekend. Use this article each week as a place to refer back to as you get ready to watch each game.

The more I watch of KJ Hamler the more I like him. I think he possesses all of the skills needed to be a dynamic playmaker in the NFL. If he has a strong pre-draft process I could see his name being very popular amongst the dynasty community. This will likely be the toughest matchup he faces all year, so I’ll be on the lookout to see how he holds up.

Similarly to Hamler, the more I watch of Dotson; the more he intrigues me. We will have to wait until at least 2021 to see him declare, but that just gives me more time to dig into his tape. Hamler has steadily improved, and if that continues, he’ll be a name to watch next year.

Dobbins has made his way into the discussion for a mid-1stround rookie draft pick. He had been lumped in with the 2nd or 3rd tier RBs in this loaded class, but I think he has surpassed his fellow classmates. As I have said before, he has good speed. quickness, power, contact balance, and acceleration, yet isn’t seen as a top-tier RB. I expect him to continue to put strong performances together and end up surprising people at the NFL combine. I expect him to continually rise in rookie rankings.

Fields has looked amazing. Some people are mentioning his name as someone that could surpass Trevor Lawrence in 2021. I am not quite ready to go that far, but I can see what everyone is excited about. Fields has hit the ground running in Columbus and continues to impress every week. He’ll be a top pick in SF drafts next year.

I’m a huge fan of AJ Dillion. He is very big for the RB position. He is listed at 250 lbs, and therefore it’s expected that he’ll be able to run over defenders, and he tends to do so regularly. However, what is less expected is speed and agility. He has shown plenty of both of those as well. He’s been most of the offense for the Eagles in 2019, and as soon as you watch some of his tape, you can see why BC feeds him frequently on offense. I think he could be a sneaky 2nd round rookie pick. I want as many AJ Dillon shares as I can get.

For the Fighting Irish, the main name to look out for is RB Tony Jones Jr. He’s yet another RB prospect that could get buried in this loaded class. And while he’s not as highly touted as most of the others, he could be a steal late in drafts. If he lands on a team with an opportunity for immediate playing time, he could turn some heads.

In my opinion, Collin Johnson could have been one of the better WRs to come out in 2019, if he had chosen to declare. Instead, he returned to Texas and has had a rather disappointing senior year so far. I still believe in Johnson, but he likely will be available at a later round than before.

Devin Duvernay is a name worth mentioning because you are likely going to be hearing it many times on Saturday. He has developed well as a WR this season and is yet another name that will be available in the middle and late rounds of rookie drafts. I hopefully will get a few shares.

I am going to keep mentioning Denzel Mims’ name because he keeps giving us all more reasons to watch him. He has made some unbelievable catches this year, and could be a late-riser in rookie drafts. If he keeps producing like he has been, the value may dry up, but for now, I’m excited about his potential.

Rondale Moore is going to be in the conversation for the top pick in 2021 rookie drafts. Unfortunately, Moore suffered an injury against Minnesota earlier this year. He is unlikely to play in this game, but the good news for us is that he isn’t eligible until 2021 anyway, so we will get to watch him all year in 2020.

Hopkins is a solid TE prospect in this year’s class. I don’t know that there are many if any, 1st round rookie TE prospects. But, Hopkins should be a middle-round pick, and if he lands in a TE friendly offense, he has the skills to be a consistent starter.

For Wisconsin, there is still only one player that I’ll be focusing on, Jonathan Taylor. Taylor is my top-ranked RB in the 2020 class, and I expect him to have a big day against the Boilermakers. I am a little concerned about the number of touches he has seen at the collegiate level, but not enough to deter me from taking him at the top of a draft if I need an RB.

Jalen Reagor continues to show us that he is the real deal. There is no denying that he has incredible speed and quickness. And, he has shown continued growth as a WR this year, despite less than ideal QB play. I think that Reagor has a rather large range of possible draft slots, but I’d be happy to take him in around the 6thor 7thpick.

On the Oklahoma side of the ball, the main player to watch is CeeDee Lamb. He’s definitely in a tier above Reagor for me, but he’s not quite at the level of Jerry Jeudy. I think Lamb is worthy of an early 1st, but I don’t think you’ll see him go before Swift or Jeudy, and probably not Taylor. But, make no mistake, Lamb is very good!

Jalen Hurts has looked really good so far for Oklahoma. He was instrumental in the Sooners’ comeback victory over Baylor. I’ve had some concerns about his NFL potential in the past, but it looks more and more like he’ll have at least a shot in the pros. In SF or 2QB leagues, he could be a guy that you can grab later than most other QBs. However, if he gets drafted early in the NFL draft, the value will likely disappear.

I wanted to mention Calcaterra’s name because he announced this week that he is stepping away from football. He’s suffered several concussions in his career and has subsequently decided to choose his long-term health over a potential NFL career. Concussions are a very serious health concern, and I have nothing but respect for his decision.

Hunter Bryant is my favorite TE in the 2020 class. His combination of size and athleticism makes him a mismatch regardless of where he lines up. He looks like a WR on the field, and I could easily see him becoming a dynamic weapon on an NFL team.

One more name for the Huskies that is worth mentioning is Jacob Eason. He’s not in the top-tier of QBs for me, but should still be an early pick in the NFL draft. His chances of succeeding are going to be extra dependant on his landing situation. Eason is a player that has the physical tools but needs to develop his game if he’s going to thrive.

For Colorado, keep your eyes on #2 in black. The Buffs like to use Shenault all over the field, and his versatility is one of his best weapons. He’s built like an RB, and once he has the ball in his hands, he is looking to make defenders pay. I am a huge fan of Shenault and think he deserves to be in consideration with the 4th-6thpick in a non-SF draft. You likely can get him later than that, but his talent is undeniable.

That’s it for this week’s games. I will be previewing a handful of players each week going forward. As I previously mentioned, if there is anyone you’d like me to take a look at, or want to share your thoughts on anything dynasty related, hit me up on Twitter (@tristancook_). Also, check out the tape on some of these guys in the Dynasty Prospect Film Room. It’s an amazing tool that I plan to take full advantage of.