It’s CFB’s Championship Week! Find out who @tristancook_ thinks have a chance to be impact players at the NFL level in this week’s ‘College Watch’ 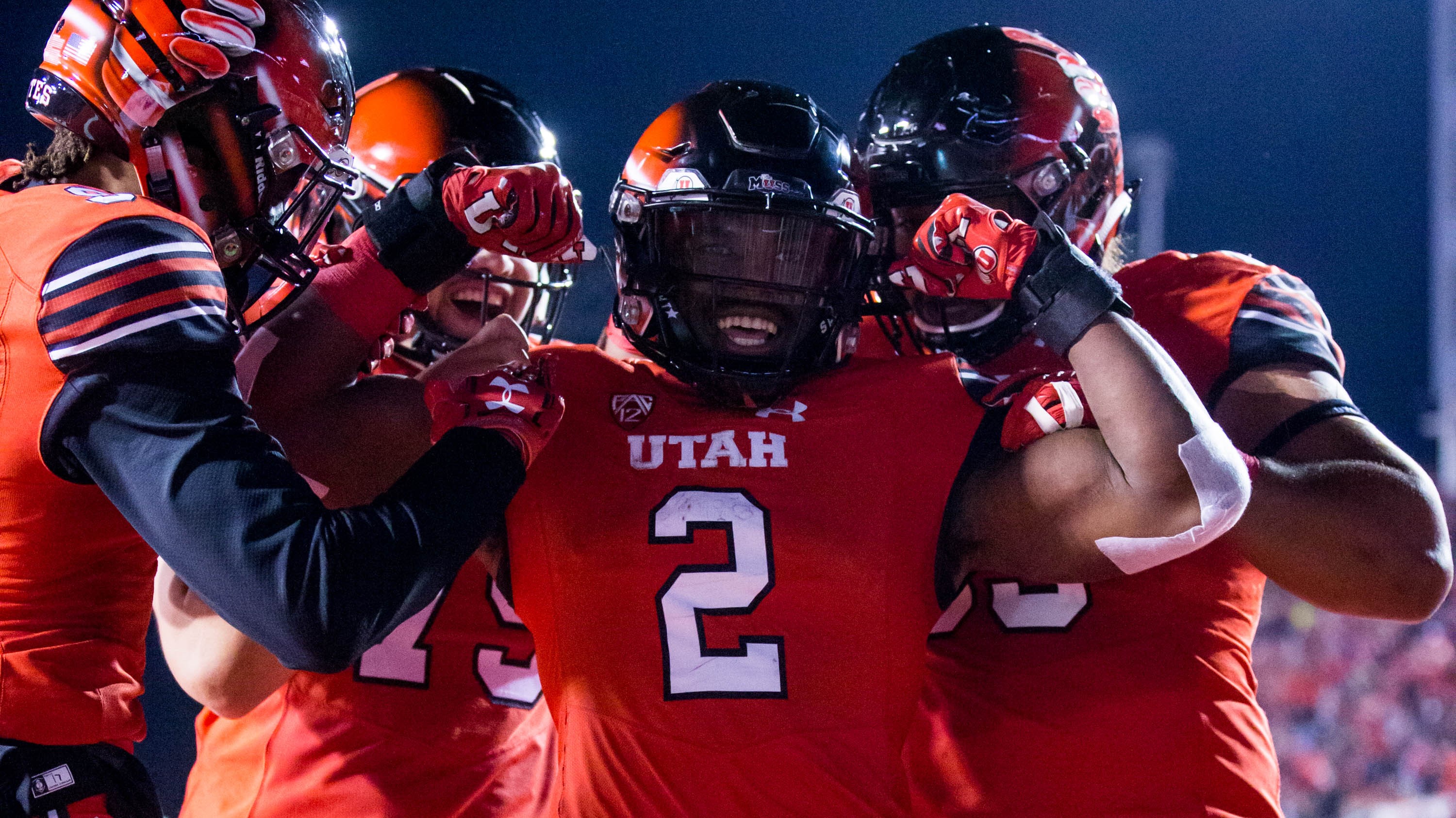 We are officially at championship week! There are only a handful of games, and I’ll be discussing most of them. The goal is to bring you the top dynasty prospects to watch in nationally televised college football games. We have reached the end of the college football regular season. And, with that comes the best part of playing dynasty fantasy football, ‘Draft SZN’! Hopefully this article will give you a leg up on your opponents, so check back here every week for my ‘Who to Watch’ series before you head into the weekend. Use this article each week as a place to refer back to as you get ready to watch each game.

As it has been all season, Utah’s offense has run through RB Zach Moss. At 222 lbs, he is a larger back, but he has also shown us quality pass catching skills as well as elusiveness. I expect Moss to once again be heavily featured against Oregon. As of now, I think Moss is a less known prospect, which could provide late round value in your rookie draft.

The main man to watch for the Ducks is Justin Herbert. Herbert is having a good senior season, and a strong performance against the Utes could propel him into a very early 1st round NFL pick. In SF leagues, Herbert will be someone I will look to target. There is a bit of a split opinion around Herbert, but I’m a believer.

The other player to watch on the Oregon side of the ball is Johnny Johnson III. He is a former 3-star recruit out of Arizona that has continued to develop this season, and has subsequently risen up draft boards. I think his NFL draft position will have a major impact on his rookie draft stock, but he’s a name to remember.

The final Duck that I will mention is Jacob Breeland. He is out for the season with a leg injury. I was a big fan of his prior to the injury, and assuming he recovers fully, I see some potentially enormous value if he slides in the draft. He should be someone you can draft in the later rounds that could blossom into a good TE.

Once again, the player I’ll be watching closest is Denzel Mims. He seems to wow us every week, so I am excited to see him play against the Sooners. I expect him to start generating more and more ‘buzz’ as we approach the draft. So, he may not have as much value come draft day if he goes relatively early, but I am a big fan, he’s fun to watch.

The best player on the Sooners’ side of the ball is CeeDee Lamb. He is someone that we are all familiar with by now. I expect Lamb to likely be the first or second WR taken in most rookie drafts this off-season. He does everything well, and has the build of a ‘true #1’ NFL WR. Hurts should be looking his way regularly, so keep your eyes on #2.

The other player to watch in this game is former Alabama QB, Jalen Hurts. We know that he is a dynamic runner, but this year for Oklahoma, Hurts has shown off very improved passing skills. He has completed nearly 72% of his passes and has only thrown 6 INTs on the season. I expect several NFL teams to be interested in his skillset, but it remains to be seen how early he will likely get drafted.

The first player to watch is D’Andre Swift. He’s probably the current “consensus” 1.01 in the 2020 class, although I think it is far too early for that to matter. The point is that Swift is incredibly talented, and will end up being one of the first backs taken in the NFL draft. There still is plenty of time to dissect his game, but for now, enjoy watching him go up against LSU’s defense in what should be a good matchup.

Next, Bulldogs signal caller Jake Fromm is someone to monitor. I think he’s generally seen in a lower tier than his counterpart in this game, but that doesn’t mean he is bad. I’m not sure that he has quite as high of a ceiling as some of the QB prospects, but I think he should still get a shot with a NFL team. He could be a value pick in SF drafts if he goes later than the other QBs.

The last name I will mention for the Bulldogs is WR George Pickens. He will be sitting out the first half of this game for fighting against Georgia Tech last week. But, seeing as he is only a freshman, we have plenty of time to evaluate his abilities in the upcoming years. I want to mention him now because you’ll likely hear his name talked about quite often. He projects to be a top of the draft type of WR when he’s finally eligible.

For the Tigers, the player everyone will be talking about is Heisman front runner, Joe Burrow. He has displayed all of the traits you want in a QB while seemingly continuing to improve. He is completing an absurd 78.3% of his passes, and has thrown for 44 touchdowns. He will likely be the top QB selected in the NFL draft.

One of Burrow’s playmakers is the lanky WR, Justin Jefferson. Jefferson is leading the Tigers in receptions this year, but has slid somewhat under the radar for many people. I am hoping that he’s a player that will be available in the middle or end of the second round of rookie drafts, because I am a big fan of his talent.

The last 2020 eligible LSU player I will mention is Clyde Edwards-Helaire. He has skyrocketed up many draft boards with strong performances over the last handful of weeks. He was previously a guy that I thought could be a value pick based on his draft stock, but I’m afraid that time has passed. Edwards-Helaire has shown great ability as both a runner and receiver, and could sneak into the end of the 1st round of rookie drafts if he stays on this trajectory.

The last name I will add here is WR, Ja’Marr Chase. Chase is the main reason that aforementioned Justin Jefferson has not received the type of attention I think he deserves. Chase has amassed nearly 1500 receiving yards and has 17 TDs on the season. He will undoubtedly be one of the names discussed as part of the 1st round of 2021 drafts, so remember his name.

I do not expect Virginia to put up much of a fight against Clemson. But, when the Cavaliers have the ball, keep your eyes on WR Hasise Dubois. He is a former 3-star recruit that is having a strong 2019 season. Dubois has the build to garner some NFL attention, so his name is worth noting.

On the Clemson side, we are aware of all of the names to watch. The first is QB Trevor Lawrence. He is my top 2021 QB and, barring any unforeseen developments, will be in the discussion for the 1st overall pick in the NFL draft. Trevor is every GMs dream prospect when it comes to the QB position.

For the 202 draft, the top Clemson player is RB, Travis Etienne. He had some concerns about his pass catching ability coming into the season, but has tallied nearly 30 catches and 300 yards in the receiving game. He is an extremely explosive runner that can take any touch to the end zone. Etienne will likely go in the top few picks of rookie drafts.

The other 2020 prospect of note for the Tigers is Tee Higgins. I’ve seen his valuation range somewhat, but in my opinion he deserves to be mentioned with the top group of WRs. I don’t know that he is at the top of that group, but I think he should end up being a 1st round rookie pick. If he slides, I’ll be jumping all over the chance to draft him in the 2nd round.

Finally, the last player for Clemson to discuss is Justyn Ross. Many people consider him a better WR prospect than Higgins, and there is merit to those claims. Ross will be one of the top WR names in the 2021 class with the likes of Ja’Marr Chase, Rondale Moore, and Amon-Ra St. Brown, to name a few.

JK Dobbins hasn’t stopped moving up draft boards since the beginning of the 2019 season. At this point, I expect him to be the 2nd or 3rd RB taken in many rookie drafts. Obviously landing spot will determine a lot, but Dobbins has shown the skills that can translate to any type of offense. I’ll be trying to get a few shares.

The biggest contender to Trevor Lawrence for top 2021 QB is Justin Fields. After a brief injury scare against the Wolverines last week, Fields bounced back to throw a TD and calm the fears of thousands of Buckeyes fans. Fields has exceeded the expectations of many people this year, and if he continues to develop on this pace, he will be neck and neck with Lawrence come the 2021 draft.

The only guy I’ll be watching for the Badgers is Jonathan Taylor. He was shut down against OSU earlier this season, only rushing for 52 yards despite having 20 carries. I hope to see him put up a better performance this week, but he remains my top RB in the 2020 class. I don’t think you’ll need the top pick to take him, but I think he deserves to be in that discussion.

That’s it for this week’s games. I will be previewing a handful of players each week going forward. As I previously mentioned, if there is anyone you’d like me to take a look at, or want to share your thoughts on anything dynasty related, hit me up on Twitter (@tristancook_). Also, check out tape on some of these guys in the Dynasty Nerds Film Room. It’s an amazing tool that I plan to take full advantage of.