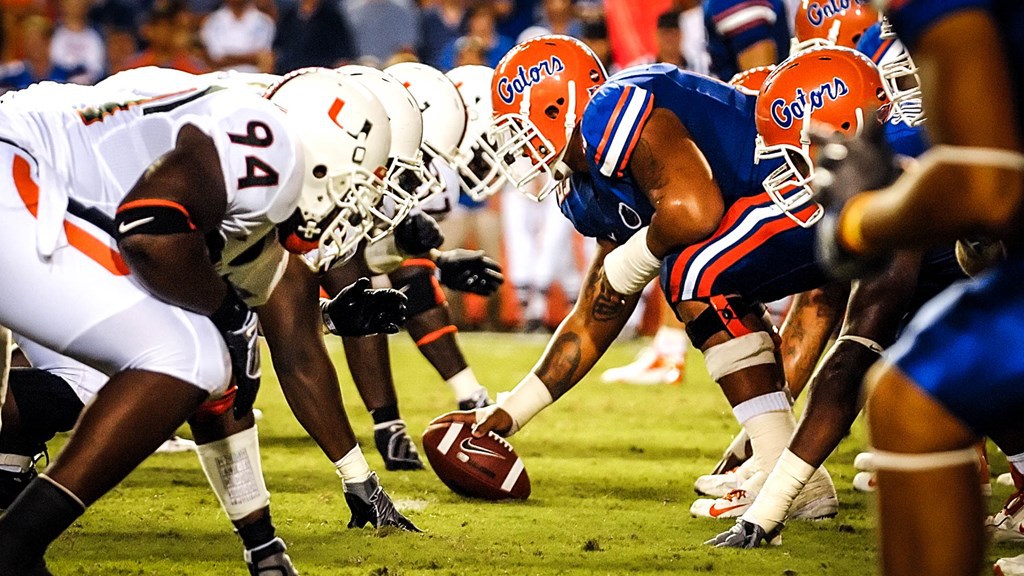 We’re here! We’ve made it! Football is back everybody! In this weekly article series, I will bring you the top dynasty prospects to watch in nationally televised college football games. We all like having something to root for or pay attention to when our favorite team isn’t on. Hopefully, this will help make games you wouldn’t otherwise be interested in more exciting.

You can start your dynasty rookie scouting by tuning in to the big opening night on Saturday, August 24th. We have a couple of good matchups to watch with a ton of talent in the first game between Florida and Miami. If you miss the second game between Arizona and Hawaii — that’s okay, you probably won’t miss anything, but I’ll cover who to watch here anyway. Since this is the first article in this series, let me explain how the format of this article will work. I’ll give you the network, time, and teams playing in nationally televised games. Below that, I’ll list the respective schools’ prospects who are worth mentioning, their position, and the year they are eligible to enter the NFL Draft.

Van Jefferson #12, WR 2020
Florida’s leading receiver from 2018 returned for his senior season along with every other Florida wide receiver from 2018. Jefferson started at Ole Miss for his first two seasons. He received an NCAA waiver that allowed him to transfer to Florida and play right away last year. He hauled in 35 receptions for 503 yards and six touchdowns – and posted a career-high 14.4 yards per reception. Jefferson is known as a great route runner, and as a redshirt senior is the leader of this deep wide receiver group. His dad is a former NFL wide receiver and the current Miami Dolphins receivers coach Shawn Jefferson.

Tyrie Cleveland #89, WR 2020
Tyrie Cleveland started in every one of Florida’s games last year other than their bowl game after he broke his collarbone in their final game versus Florida St. Cleveland had a very disappointing 2018 with only 18 catches for 212 yards and three touchdowns. He’ll be used as their main deep threat in the Gators offense.

Trevon Grimes #8, WR 2020
In his second year with quarterback, Feleipe Franks, Grimes is a perfect candidate for a breakout year in 2019. Arguably the most talented wide receiver in this deep group, Grimes was a five-star recruit out of Fort Lauderdale, FL (St. Thomas Aquinas) and boasts a 6-foot-5, 210-pound stature. Grimes transferred from Ohio State following a reported racially-charged confrontation with the old assistant coach, Zach Smith.

Kadarius Toney #1, WR 2020
Toney will be used as a utility knife in the Florida offense. You’ll see him line up as a wide receiver split out or in the slot, sometimes he’ll be used as a running back, or even as a quarterback when Florida uses the Wildcat offense. Kadarius Toney is known for his ability to make defenders miss with a shimmy and shake.

Jacob Copeland #15, WR 2021
Jacob Copeland is a former Under Armour All-American. A couple of injuries lead to Copeland redshirting last year in his true freshman season. He’s known as a ‘burner’ and will be used in a similar way to Kadarius Toney. According to his teammates, Copeland is the strongest wide receiver on the team, one of the fastest and probably the quickest coming out of his cuts and getting separation from defensive backs.

Lamical Perine #2, RB 2020
Last year, Perine was in a timeshare with Jordan Scarlett as a junior but led the team with 134 carries and 826 rushing yards with seven touchdowns. He led the team in rushing seven of the last eight games against FBS foes, totaled 214 yards from scrimmage at Vanderbilt and ended the regular season with a career-high 129 rushing yards at Florida State. Perine is definitely the go-to guy in the Gators’ backfield.

Malik Davis #20, RB 2020
Malik Davis’ past two seasons ended in injuries, a torn ACL in 2017 and a broken foot in 2018. Davis was the leading rusher in the Gators’ backfield in his true freshman season (2017) before leaving with an injury in week 8 against Georgia. Davis is back healthy and ready to make an impact in 2019.

Dameon Pierce #27, RB 2021
During his freshman season, Pierce ran for 424 yards and two touchdowns for the Gators while catching five passes out of the backfield for 20 yards and one touchdown. With senior Lamical Perine still around for the 2019 campaign, Pierce shouldn’t see a monster workload until he’s a junior.

Kyle Pitts #84, TE 2021
At 6-foot-6, 246 pounds, Pitts is an absolute monster. He is a terrific athlete with fluidity in his movements and speed down the field. He’s a mismatch versus linebackers with his athleticism and a mismatch for defensive backs with his size. There are plenty of pass-catchers in the Florida offense already, so he may not see a ton volume this year.

Jeff Thomas #4, WR 2020
Jeff Thomas was dismissed from the team toward the end of the 2018 season for various reasons. He was brought back after the new head coach, Manny Diaz, took over the program this year. Thomas is an electrifying playmaker in the Hurricanes’ offense and will most likely receive the most touches from the wide receiver position. He’s an explosive athlete who will frequent the post-game highlight reels.

Jeremiah Payton #12, WR 2022
Payton was rated as a consensus four-star and was ranked as the eighth-best recruit in all of Florida by ESPN in the 2019 class. According to 247Sports, Payton is the highest-ranked recruit in Miami’s class, and he’s expected to contribute immediately this season. The true freshman Payton will compete for playing time, but being the top recruit in Miami’s 2019 class I’m willing to bet he sees the field sooner rather than later — if not in this weekend’s matchup versus Florida.

Deejay Dallas #13, RB 2020
Dallas finished second on the team last season in rushing (617 yards and six touchdowns for a 5.7-yards-per-carry average) behind current Seattle Seahawks tailback, Travis Homer. Dallas was the main kick and punt returner as well. He is an excellent player in the open field who shows a great ability to make people miss. Dallas will most likely be the lead guy in the Hurricanes backfield until Lorenzo Lingard is fully back from his 2018 knee injury.

Lorenzo Lingard #1, RB 2021
The six-foot, 202-pound sophomore running back won the 110-meter hurdles while in high school, played in the U.S. Army All-American Bowl in 2018, and was the Florida Gatorade Player of the Year as a prep star. Being the only consensus five-star recruit on the Canes’ roster, a lot is expected of Lingard. He, unfortunately, suffered a season-ending knee injury requiring surgery that may limit him in this matchup. However, sit up in your seat if you see #1 take the field, he’s electric.

Will Mallory #85, TE 2021
It’s been said that the offensive coordinator, Dan Enos, loves the tight ends. If you come to Miami as a tight end, it’s expected of you to live up to the rich tradition. The Canes’ offense will use quite a bit of 12 personnel due to having guys like Mallory and Jordan on the team. Will Mallory’s ‘Go-Go Gadget’ arms allow him to make plays on the ball other receivers wouldn’t be able to. Look for him to be a target in the red zone Saturday night.

Brevin Jordan #9, TE 2021
Brevin Jordan, a preseason All-ACC selection, had a breakout season last fall, starting 11 of Miami’s 13 games. He caught 32 passes — the second-most on the roster — and totaled 287 yards and four touchdowns, including a 41-yard beauty that proved the difference in the Hurricanes’ 28-27 comeback win over rival Florida State last season. Jordan is a “move” tight end who will line up in multiple spots in the offense. He’s a gifted athlete who poses a mismatch wherever he is on the field. 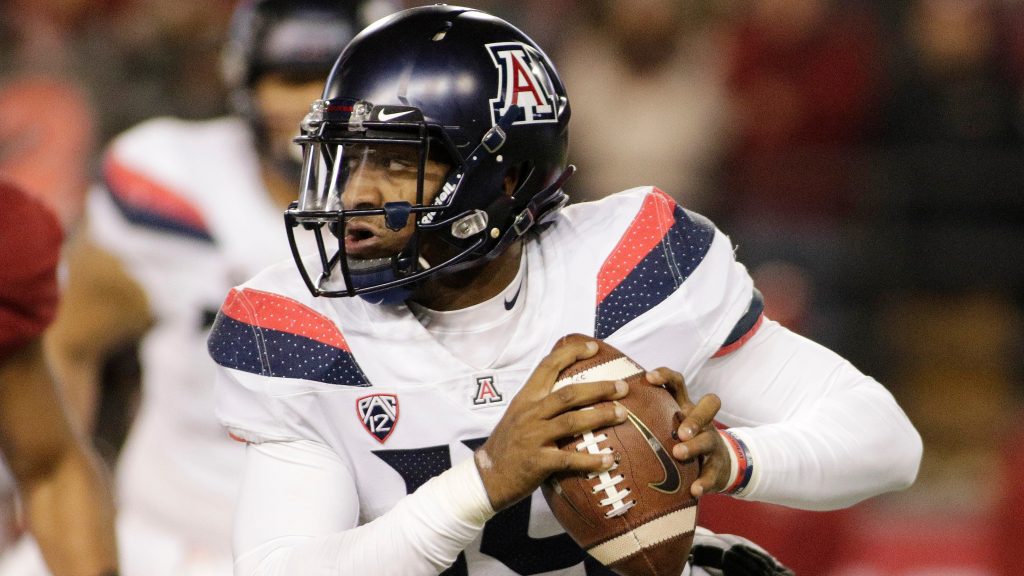 J.J. Taylor #21, RB 2020
Arizona has managed to lead the Pac-12 in rushing for three straight seasons, and J.J. Taylor has been a big part of it. His 1,434 rushing yards in 2018 were second-best in the conference and fourth-most in Arizona school history. Taylor enters 2019 with the fifth-most carries (401) of any active FBS player over the past two seasons. J.J. has a small frame at only 5-foot-6 and 185 pounds. Taylor should have a big game to start the year versus Hawaii on Saturday night.

Cole McDonald #13, QB 2020
McDonald enters his second season at the helm of head coach Nick Rolovich’s run-and-shoot offense. He led the Mountain West with 3,675 passing yards and 36 passing touchdowns, averaging eight yards per attempt while adding 580 rushing yards and four more scores on the ground in 2018. Despite losing his best target to the NFL in John Ursua, McDonald should be able to take another step forward this season kicking it off versus a tough opponent in Arizona.

Enjoy the games this opening weekend! Football is back! Now you have some guys to keep an eye on with your fantasy teams in mind. You now have a leg up on your league mates. If you aren’t already, check me out on Twitter: @JaredWackerlyFF. I’m always happy to discuss prospects with you. See you next week!