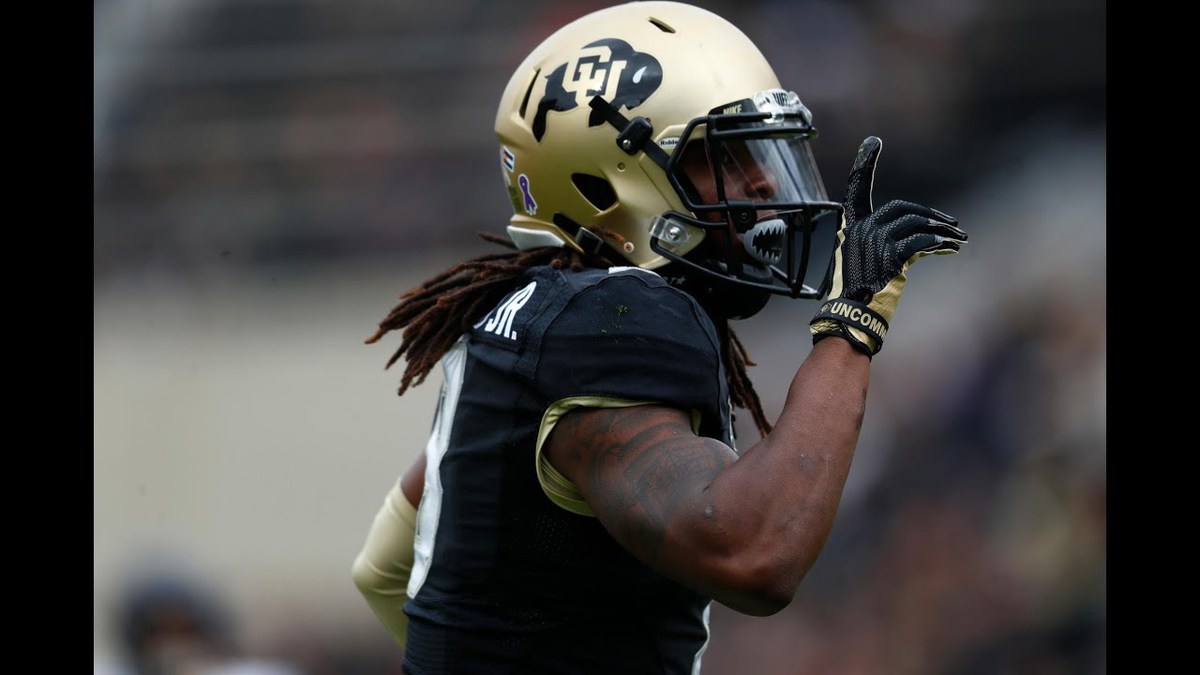 Week 7 is upon us! The goal for this weekly article is to bring you the top dynasty prospects to watch in nationally televised college football games. It’s never too early to take a look forward. Who are going to be the sleepers of upcoming rookie drafts? Check back here every week for my ‘Who to Watch’ series before you head into the weekend. Use this article each week as a place to refer back to as you get ready to watch each game.

In my opinion, the best player in this game is LaViska Shenault Jr. But, if he plays is a major question. He’s been sidelined by an injury for a couple of weeks now. When Shenault is on the field, he’s a dynamic playmaker that is nearly unstoppable. If he’s able to shake the injury concerns, he’s on the same tier as Jeudy and Lamb for me.

The guy throwing LaViska the ball is Steven Montez. He’s quite an interesting prospect. Some “experts” have said he has the potential to be a day 2 or better pick in the upcoming draft. I’m not as high on him. His play is a bit too inconsistent for my liking. However, he does possess a big arm and has the “prototypical” size.

In the absence of Shenault, Tony Brown has emerged as an impressive WR. He’s currently leading the Buffs in most receptions, receiving yards, and touchdowns. He’ll likely be a late-round pick in the NFL but could move his way up with an impressive season.

The main player to watch when Oregon has the ball is QB Justin Herbert. He may be suffering from the “Matt Barkley syndrome”. If you’re unfamiliar with that, Barkley was projected as the 1st overall pick after his junior season at USC. He decided to return to the Trojans and ended up falling several rounds. Fortunately for Herbert, he’s not quite there. His 2019 season has been disappointing after all the hype that surrounded him a year ago. I am keeping a close eye on Herbert to see if he’s able to maintain his draft stock or not.

As I have previously mentioned, Lamb is on the shortlist for the best WR in the 2020 class. He is one of the most fluid receivers in the country. He has consistent hands and a special ability to catch the ball away from his body. He may lack an elite trait that some of the other WRs in this class have, but doesn’t have any holes in his game either. Lamb is firmly in my top-tier at WR right now

Jalen Hurts has looked amazing so far for Oklahoma. I’ve had my reservations about his NFL potential, but with each passing week, it looks more and more like he’ll have at least a shot in the pros. Texas is easily the toughest opponent Hurts has faced this year, so it’ll be worth watching to see how he responds.

Aside from Lamb, Rambo is my next favorite player to watch. Partially because his name is fun to say, but also because he’s explosive and has the quick-twitch abilities that are not teachable. He’ the Sooners 2nd leading receiver so far, so keep an eye on him if Texas shifts their coverage towards Lamb.

Sam Ehlinger is an interesting player. He has shown glimpses of NFL potential but likely needs to improve his downfield accuracy if he’s going to succeed at the next level. He is capable of making most of the throws but does not have the elite arm strength that many NFL QBs have.

Possibly the fastest player on the field in this game is Devin Duvernay. He’s one of those players that can look like he’s got a gear that others just don’t have. It was reported that he ran a laser-timed sub 4.40 in high school. However, he’s got more ability than just speed. I am excited to see if how he does against this Oklahoma team.

Collin Johnson is an absolute beast. In my opinion, he could have been one of the better WRs to come out in 2019, if he had chosen to declare. Instead, he returned to Texas and has had a rather disappointing start to his senior year. I expect him to get on track at some point, but if he continues to disappoint this year, he could end up being a value pick later in drafts.

A player who has seen their name all over RB rankings is Cam Akers. He is seen as a potential top rookie draft pick by some, while others have him much lower. I tend to be closer to the first group of people. I think Akers is a talented runner, he’s suffered from the difficulties that FSU has faced recently, but I don’t fully fault him for it. He could turn into a value pick if people keep pushing him down their rankings.

One other name to keep an eye on when Florida State has the ball is Tamorrion Terry. The big WR is leading the team in receptions, receiving yards, and touchdowns, so you will likely see his name called when FSU is on the field.

Trevor Lawrence is by no means a new name to anyone in the Dynasty community. He’s probably the projected 1.01 in the 2021 NFL draft and will be taken at the top of any SF or 2QB dynasty draft. He’s got the size, mobility, and arm strength to dominate the college game. The Tigers offense is littered with talent, and I’m always excited to watch Lawrence utilize his playmakers.

One of those playmakers is Travis Etienne. He’s one of the top few RBs on almost every 2020 rookie board and it’s easy to see why. He’s dynamic with the ball in his hand and has breakaway speed. I have him below D’Andre Swift and Jonathan Taylor, but I can see why other people have him higher.

Tee Higgins is an extremely long WR that has been one of Lawrence’s favorite weapons. Due to the vast amount of talent that is likely going to be in 2020 rookie drafts, Higgins is a guy that could slip to the end of the 1st or slightly later. If that happens, I will be trying to acquire as many shares as I can. I’m a believer.

Unfortunately, Justyn Ross isn’t eligible until 2021. But, he may be a better WR than Higgins once they are both wearing NFL uniforms. Like Higgins, Ross has the prototypical size for a top WR and has shown great hands and ball skills so far in his short career. I’m excited to get to draft Ross in the 1st round in 2021.

Borghi is an extremely exciting player. He’s a nightmare to take down in the open field and a thrill to watch with the ball in his hands. He’s a bit undersized for a typical NFL RB, but we’ve seen players succeed at his size. He’s someone that seems to always be able to make a defender miss. He won’t be eligible until 2021, but I’m excited to see him develop.

Eno Benjamin is another good RB in this loaded 2020 class. For me, he’s a tier below the top guys but is still a 1st round pick in my eyes. He’s been relied heavily upon by the ASU offense this year and has consequently gained a few bumps and bruises. I am expecting a big day for him against the Cougars.

A name that has been popular of late is Brandon Aiyuk. He’s leading the team in most receiving categories and flashed a few glimpses of special talent. I’m not getting overly excited by him, but I will keep his name in mind as the year progresses.

This is the big Saturday night game, so I want to cover it, but I did highlight both of these teams in last week’s article. So, I will briefly mention some of the players again, but not go much detail.

The matchup between Florida’s WRs and LSU’s DBs is going to be a fun one to watch. Freddie Swain is another former 4-star recruit, he has underachieved since arriving at Florida. He had a monster game last week against a good Auburn team, so I will be watching to see if he’s able to repeat it this week.

Perine is the cousin of former Oklahoma star and current NFL RB, Samaje Perine. He, like Swain, had a big week against Auburn. Perine was able to bust off an 88-yard rush en route to a great week. I’m not sure if there is a role or not for him at the NFL level, but I will monitor him in this game.

Predictably, Burrow tore apart the Utah State Aggies to the tune of 344 yards passing and 6 total TDs. He’s likely to see his name continue to move up draft boards, especially if he’s able to perform well against tougher competition.

Like Burrow, Jefferson was able to have his way with the DBs last week. He put up an impressive receiving line of 9/155/2. As I mentioned, he does not have quite as high of an upside as some of the 2020 elite WRs, but he has a chance to be another WR to come from LSU and become an impact player at the NFL level.

Ja’Marr Chase had more pedestrian day last week, but I am by no means concerned. It should be noted that he’s not eligible until 2021, however, he has an extremely high ceiling. Chase’s best attributes are that he tracks and adjusts to the ball in the air extremely well. Keep your eyes on him any time the Tigers have the ball.

Marshall is another potential 2021 WR. He broke his foot against Vanderbilt, which means once again, he will not be playing in this game. However, keep him on your radar. He should be back at some point this season, so don’t forget his name.

Zach Moss is the first of two players that I will be watching the closest in this game. He is not on the elite tier of some of the 2020 RBs, but he is the type of player that could provide immense value later in your rookie draft. I am excited to see how he performs throughout 2019.

The other player I’ll be watching is Isaiah Hodgins. The big 6’4 WR has essentially been the entire passing offense for Oregon State so far in 2019. Coming out of high school, Hodgins chose the Beavers over some bigger named schools, and has steadily improved his production each season. He will need to run well whenever he chooses to go pro, but he could be another value pick later in drafts. A big shout out is due to @pschmidty99 on Twitter for pointing me in the direction of Hodgins.