Who should you be watching on a busy Saturday of CFB? @tristancook_ has you covered in Weekly Watch! 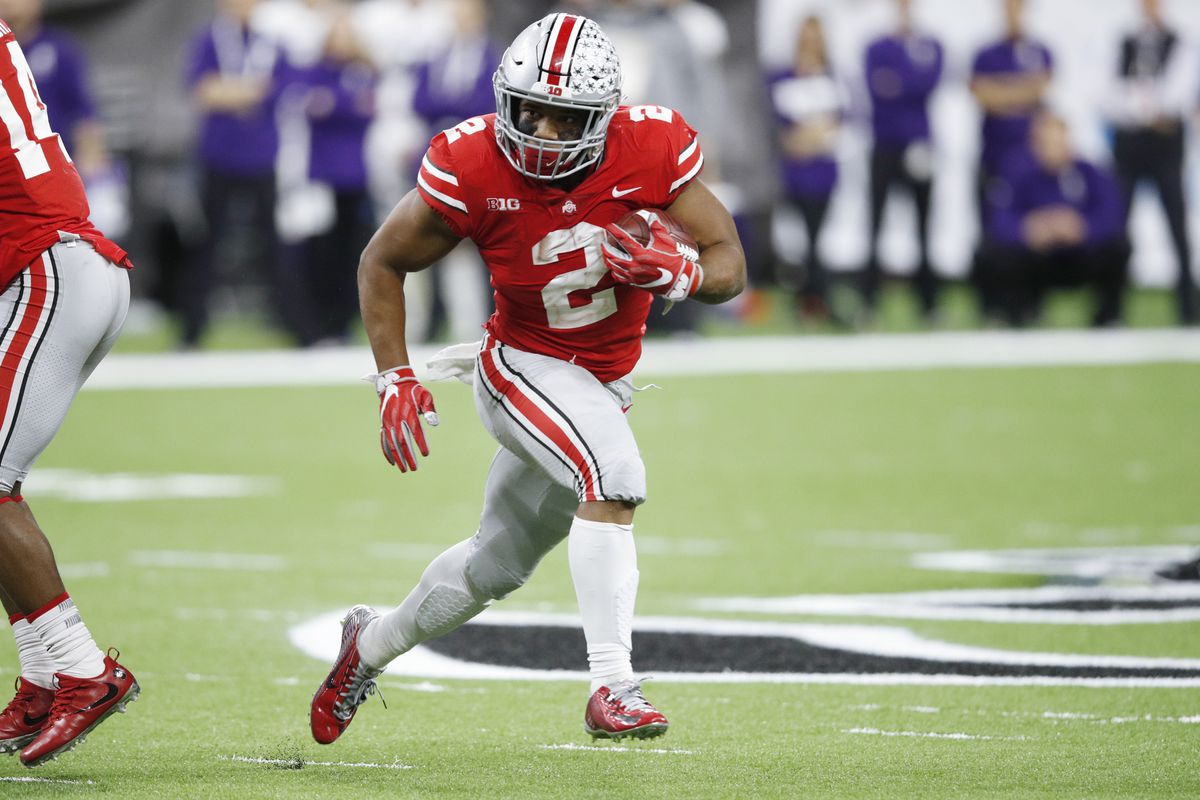 We’ve reached week 9! If you’re new to this article, the goal is to bring you the top dynasty prospects to watch in nationally televised college football games. It’s never too early to take a look forward. Who are going to be the sleepers of upcoming rookie drafts? Check back here every week for my ‘Who to Watch’ series before you head into the weekend. Use this article each week as a place to refer back to as you get ready to watch each game.

Feel free to reach out on Twitter (@tristancook_) if you have players you think deserve to be mentioned in next week’s article. Hopefully this will give you a few names to monitor throughout the year. And for NerdHerd members, you can check out some film on these prospects in the Dynasty Nerds Prospect Film Room.

After a disappointing loss against Illinois, all eyes will be on Jonathan Taylor as he takes on the vaunted Ohio State defense this week. This will be his toughest opponent yet, so I am anxious to see how he responds. The next best opponent he’s faced was Michigan who he torched for 203 yards and 2 TDs on 23 carries. I would like to see him used more in the passing game, but this will be a good measuring stick for Taylor, who is my RB1 for 2020.

As I mentioned last week, Cephus has shown well this season for the Badgers and had a relatively good day the disappointing loss to the Illini. This Wisconsin offense runs through Taylor, but when they air it out look for Chephus to make some plays.

Dobbins is quickly rising up my rookie draft rankings. He made an immediate impact upon arriving to Columbus as a freshman, and has continued to develop nicely as a RB prospect. He’s been lumped in with the 2nd or 3rd tier RBs in this loaded class, but has been making a strong case to move up. He has good speed. quickness, contact balance, and acceleration, yet isn’t seen as a top-tier RB. I expect him to continue to put strong performances together and end up surprising people at the NFL combine.

Another year and we have another Buckeye WR to watch. Hill is more of a quick-twitch player than someone that will torch a DB. Hill is leading the team in receptions, but is only averaging 10.1 yards per catch, so expect to see Hill used closer to the LOS, where his quickness can be deadly.

Fields has performed very well in his first season as the OSU signal caller. The former Georgia 5-star transfer is living up to the hype he had when he headed to Athens. If he continues to develop his ability to make NFL throws, his athleticism will make him a very coveted QB prospect come the 2021 draft.

This game features a few players that I have yet to mention this year, but all are deserving of our attention. The first is Bulldogs RB Kylin Hill. He’s drawn some mixed reviews as a prospect, but what isn’t debated is his physicality and strength as a runner. If he’s able to develop a bit more patience in his running style he could be a late riser on draft boards.

The first A&M player I’ll be watching is Quartney Davis. He’s a player that has performed well as one of the best offensive weapons for the Aggies. He’s been able to produce well against some of the best defenses in the SEC.  I think the dynamic Aggie WR should end up as one of many mid-round rookie draft players that could provide immense value in the 2020 draft.

The final player I’ll mention is Kendrick Rogers. At 6’4”, he’s an imposing figure for this A&M team. His size alone makes him a red zone threat that could translate at the next level. However, he will need to develop more if he’s going to make waves in the NFL. So, it wouldn’t surprise me to see him return to College Station for his senior year. But, keep an eye on big #13 for Texas A&M.

This in-state rivalry game will feature two of the fastest players in all of college football in Devin Duvernay and Jalen Reagor. For Duvernay, his prospects hinge on his ability to develop the nuances of playing the WR position at the NFL level. We know there will always be a place for speed in the NFL, so if Duvernay can continue to improve, he has a chance to play at the next level.

As I have mentioned before, Collin Johnson is an absolute beast. He could have been one of the better WRs to come out in 2019, if he had chosen to declare. Instead, he returned to Texas but hasn’t performed as well as expected. I still think he will get on track at some point, but if he continues to disappoint this year, he could end up being a value pick later in drafts.

No one has ever questioned Reagor’s speed, but he has consistently shown that he’s more than just a “speed guy”. The only downside to Reagor is watching the sub-par QB play that limits his chances. He’s a thrill to watch once he’s able to get his hands on the ball. Due to the crazy projected amount of talent in this draft, he should be available in the middle-late part of your 1st round.

One more player to watch in this game is Darius Anderson. He has enough quickness to make some defenders miss and enough balance to stay on his feet for those he can’t shake. He could carve out a role for himself in the right situation at the next level. Depending on how he runs at the combine, he will likely be a mid-late round draft pick in your rookie draft.

The guy I’ll be watching closest for the Fighting Irish is RB Tony Jones Jr. He’s powered this team to the 8th spot in this week’s rankings.and is coming off an outstanding 176 yard performance last week in a 30-27 victory over Southern California. He’s yet another RB prospect that could be in this loaded class. And while he’s not as highly touted as most of the others, he could be a steal late in drafts.

The Wolverines have multiple NFL prospects that I’ll be watching. The first of which is Donovan Peoples-Jones. He was the #1 WR recruit in the country but has underwhelmed so far in his career in Ann Arbor. He is eligible to declare for the NFL draft this year, but I think he may return for his senior season. If he is ever going to turn into the type of WR that he was touted to be, he will need to polish his abilities.

Another Michigan WR to watch is Nico Collins. He’s another big-bodied receiver for this Wolverines team. He’s coming off a week where he led the team in receptions and receiving yards, but it was not enough to beat Penn State on the road. The WRs are tough to evaluate in Jim Harbaugh’s offense, but Collins has the physical tools to translate to the NFL level.

Zach Charbonnet has continued to display good running ability for the Wolverines in his true freshman season. There is still a ton of time before we will have a chance to draft him, and that means that likely a lot will change between now and then, but don’t forget his name. He looks like he’ll be a good one.

AJ Dillion is a behemoth of a RB. At 250 lbs, it’s expected that he’ll be able to run over defenders, and he tends to so on a regular basis. Not many people want to meet him in the hole and try to take him down. But, what is less expected is speed and agility. But, he has plenty of both of those as well. He’s been most of the offense for the Eagles in 2019, and as soon as you watch some of his tape, you can see why BC feeds him frequently on offense. I think he could be a sneaky 2nd round rookie pick.

There isn’t much analysis that is needed here, just enjoy watching Lawrence shred college defenses while we still can. He’s as good as people have made him out to be. Some team will be thrilled to get him in 2021, my bet is the Cincinnati Bengals, but at this point that’s an educated guess at best.

Etienne has seen his name slide a bit in 2020 RB rankings. However, I don’t think it’s any fault of his. It’s mostly due to other players trying to push their way up into the top-3 RBs. I currently have Etienne at 3rd amongst RBs, in a tier by himself. I don’t think he’s quite as good as Taylor or Swift, but he’s better than any of the other RBs at this point.

Tee Higgins one of Lawrence’s favorite weapons. I’ve seen Higgins slip his way down to the end of the 1st round in rookie mock drafts, and I’m buying as many shares as I can at that price. He’s a very long WR and should be a size/speed matchup nightmare in the NFL.

Justyn Ross is going to see his name at or near the top of 2021 rookie mock drafts. If you’re unfamiliar with the names that are expected to declare for 2021, Ross is one of the best WRs in this class.

Speaking of the 2021 class, Max Borghi’s name is likely to be in the 1st round discussion. He always seems to make at least one defender miss before going down. He’s a bit undersized for a typical NFL RB, but we’ve seen players succeed at his size. You’ll have plenty of time to familiarize yourself with Borghi.

Herbert had a good game against the Washington Huskies last week. He seems to be solidifying himself as one of the top QB names in the 2020 draft. He will likely end up going slightly later than Tua or Burrow, but that could actually work in his favor. Consider me a member of the Herbert fan club.

That’s it for this week’s games. I will be previewing a handful of players each week going forward. As I previously mentioned, if there is anyone you’d like me to take a look at, or want to share your thoughts on anything dynasty related, hit me up on Twitter (@tristancook_). Also, check out tape on some of these guys in the Dynasty Nerds Prospect Film Room. It’s an amazing tool that I plan to take full advantage of.