What is Fueling the Russell Gage Hype Train 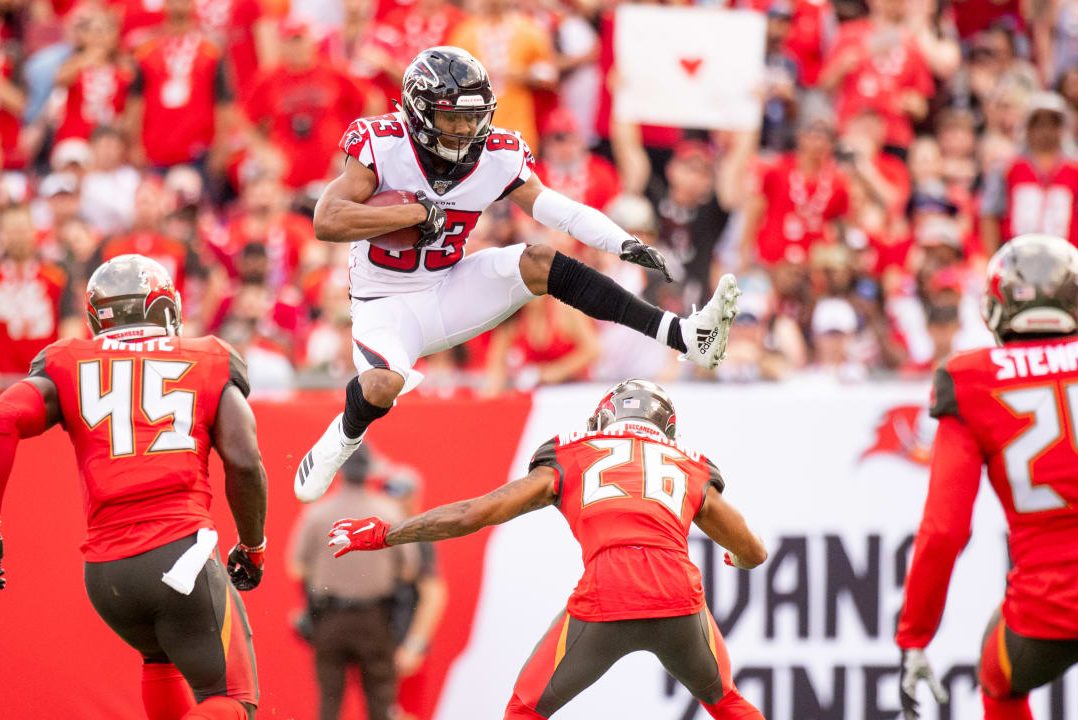 This offseason, I have found myself chasing a handful of players who, I believe, could turn in sneaky WR2/WR3 seasons. From the smaller sample size standouts like Steven Sims (sorry for the Seussian sequence) to the better-known names like Hunter Renfrow and Allen Lazard, it’s hard to resist talking oneself into the upside of a dirt-cheap dynasty stash coming off of a productive stretch. Measuring the breakout potential of these players will often come down to the popular buzzwords: vacated targets. Chasing vacated targets can be a dangerous game, as we saw last season with players like James Washington (the next AB!) and Albert Wilson (Jarvis Landry 2.0!).

When looking for a dynasty buy-low candidate at the wide receiver or tight end position, I find myself playing this exact game. It will occasionally resulting in the mass dumping of James Washington and Albert Wilson shares onto the waiver wire. While there are dangers to chasing small sample size statistics in a vacuum. It can lead even the most informed fantasy football fanatics astray. Often the potential upside of hitting on one of these players far outweighs the cost of investing in them.

This season, my favorite undervalued receiver has been Atlanta Falcons wideout Russell Gage. Gage carries the rather unsexy label of “Mohamed Sanu contingency plan.” He was an effective flex option in the second half of last season; scoring double-digit PPR points in five of the nine games following Sanu’s trade to New England. His ADP in dynasty drafts doesn’t quite reflect that (277 as of July 30th per Player Profiler). Gage has drawn the praise of the Falcons coaching staff on numerous occasions. His most significant cosign coming from OC Dirk Koetter, who stated that he thinks the third-year wideout will take his game to a new level in 2020.

Atlanta lost target hog tight end Austin Hooper and a few other less notable pass-catchers. The Falcons are expected to have roughly 258 vacated targets this season. The most in the league, leaving Gage with ample opportunity to pick up where he left off last season.

Gage saw a whopping 7.3 targets per-game last season following Sanu’s departure. So it’s easy to see why he may be one of the top candidates to absorb these vacated targets. Even if we were to assume that Gage’s targets per-game would remain the same, that average over a 16 game schedule would put him on pace for roughly 117 total targets. With that large of a target share, Gage’s would be on course for around 78 receptions and nearly 1,000 yards receiving.

Gage accounted for just over ⅕ of the Falcons red zone target share, despite seeing only a 16% target share in the games following Sanu’s trade. It’s clear that he has developed some level of trust with QB Matt Ryan. Gage was one of the most efficient receivers in the NFL last season. He finished 10th in HOG rate among qualified receivers at 16.5 (per PlayerProfiler). Much has been made of the team’s acquisition of 2018 first-round pick Hayden Hurst — Austin Hooper’s replacement at tight end. But the delays brought on by the Covid-19 may hamper Hurst’s upside for 2020. This will likely force Atlanta to key in on players like Gage. Gage will already be familiar with the offense and can fill the void of the vacated targets.

The Next Great Slot Receiver?

Gage played 64.4% of his snaps last season in the slot for the Falcons. He should see looks on shorter throws, moving the chains on plays where Ridley and Jones are covered. The primary requisite of a successful NFL slot receiver is to find ways to consistently separate from a nickel corner in a small amount of space. In this area, Gage was hugely successful last season. He average of 1.82 yards of separation per-target (17th best mark in the league). With defenses prioritizing the coverage of Jones and Ridley, Gage should have the advantage of easier one-on-one matchups. More often than not, leaving him ample opportunity to produce.

It’s easy enough to talk yourself out of Gage as a long-term asset in dynasty leagues. Following a rather underwhelming career at LSU that saw him catch only 26 total passes, Gage was selected by Atlanta as a flyer in the sixth round of the 2018 NFL Draft. There’s little money attached to Gage for the next few seasons, and he’s a lesser talent than both Julio Jones and Calvin Ridley.

With former first-round pick Laquon Treadwell and former Virginia standout Olamide Zaccheus both nipping at his heels for playing time. Gage’s place on the depth chart is easily the most tenuous. Yet we’ve seen players in similar circumstances rise to the occasion multiple times in the past. Evidenced by the successes of former afterthoughts like Antonio Brown (6th round), Julian Edelman (7th round), Adam Thielen (undrafted), and Stefon Diggs (5th round). While comparing Gage to those players may be high praise. His athletic profile combined with the role he’s carved out has him set up for a prime breakout opportunity. It is typically inadvisable to chase a WR3 as a potential league-winner. But the set of circumstances surrounding Gage this season presents a compelling case on behalf of the player in question.

At an absolute minimum, Gage is a great value pick. He should be in store for a few flex-worthy starts this season. Yet looking long-term, Gage could parlay a strong performance this season into a concrete role in Atlanta’s prolific passing attack for the next few seasons. He could provide the team with tremendous value as a relatively cheap complement to Jones and Ridley. The Falcons offense poised to return to prominence following a down year. The team still finished 13th in the league with just over 23 points-per-game. Gage should be a key glue guy in the passing game. We’ve seen Atlanta’s offense support multiple fantasy-relevant pass-catchers in the past, thus we can justify chasing Gage’s upside as the WR3 in the offense.

You can follow me on Twitter for more fantasy football content. The DynastyGM tool is the best way to manage your dynasty teams bundle with your Nerd Herd membership for just $4.99 or get it solo for $2.99.