@DynastySlabs breaks down the wild ride which has been the 2020 Tampa Bay receiving core. But what’s next for this star studded group? 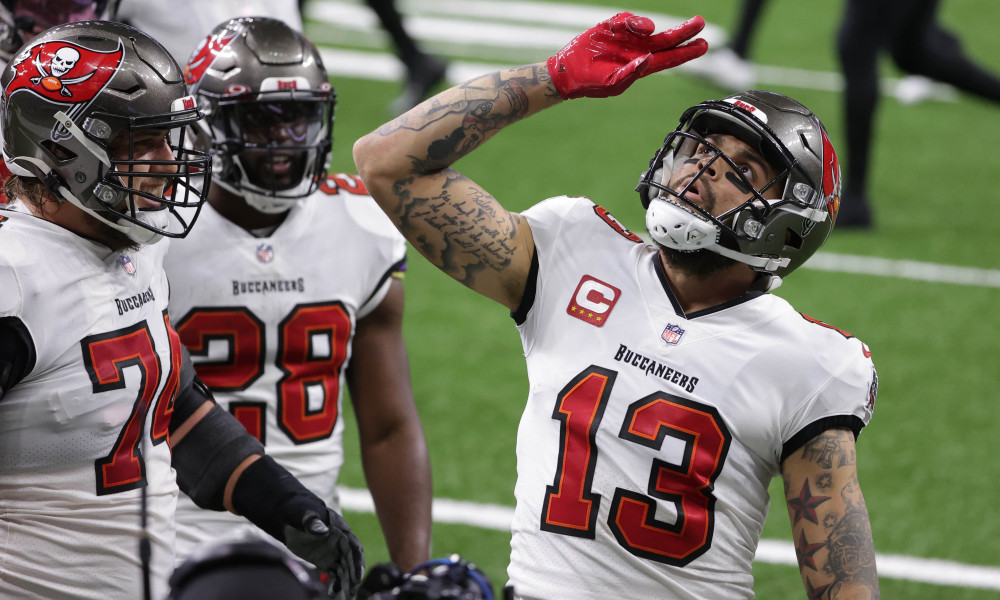 What is the best concert you have ever experienced? For me, it was Garth Brooks circa 2015, just as he had begun touring once again. The stories, the songs, and the way he commanded every inch of that stage mesmerized me for hours. The crescendo came when his wife, Trisha Yearwood (an award-winning singer in her own right), appeared from out of nowhere. She sang several duets with her husband before ceding the stage back to him. After hours of complete absorption in the moment, and with a dull ringing in my ears, I remember the concert ending. I remember walking out to the car with some of my best friends and us looking around as if to ask, “what now?” After a star-studded season full of ups and downs, I find myself asking the same question of the Tampa Bay receiving core. What now?

The 2020 Tampa Bay Buccaneers were loaded when it came to star power and name recognition. Between Mike Evans, Chris Godwin, Antonio Brown, and Gronk, Tom Brady had his choice of high profile targets this year. Unfortunately, the Tampa Bay wide receiver group was also loaded with injuries, missed/limited games, and suspension (looking at you, AB).

In addition to games missed by receivers this year, Mike Evans (who started all 16 games) was on the injury report and limited in practice five of the first seven weeks and left Week 17 with a knee injury after playing just 11 snaps. It wasn’t until the second half of the season that we saw what this offense looked like with its top three receiving options. From weeks 9-16 (excluding Evans’ early Week 17 exit), here is how the numbers broke down:

Over the second half of the season, Evans led the Bucs receivers in everything but snaps and catch % despite heavy competition. Don’t let that number alarm you, though! Brady targeted Evans deeper down the field and in the red-zone more often. While these higher difficulty throws contributed to Evans’ lower catch percentage than Godwin or Brown, the passes thrown his way are worth more and can make up that gap.

Godwin’s season felt like making your way through heavy traffic. Start, stop, start-stop; 6-79, Hip/Quad Out, 5-64-1, Hamstring Out, etc. However, in the 12 games he played, Godwin was effective, posting a 16 game pace of 112 targets, 87 catches, 1120 yards, and just over nine touchdowns. Those numbers increase when you look at the four games where only he and Evans played. Especially in the three of those four where Evans played but was limited in practice all week and appeared on the injury report. In a crowded offense, where targets were spread thin, Godwin proved that even in less than ideal circumstances, he could put up a 16 game pace that would have put him as the WR11, bumping down…Mike Evans!

We all know what Antonio Brown is capable of when physically and mentally right, so let me save us all some time and say: If AB is given the opportunity to be a number one option, he is still more than capable of producing. If you would like an example, you can take a look at Week 17. Evans went down after playing only 11 snaps, and AB turned 15 targets into 11-138-2…he’s still got it.

So, if all three guys proved they are capable of being WR1’s if given the opportunity, they question we should ask is, “Will they get the opportunity?”  Godwin and Brown will become free agents this offseason and the Bucs cap space should be approximately $28 million.  On its face that seems pretty perfect, give Godwin $17M, AB $11M and voilá, the band is back together.

However, Godwin and AB are just two of the pass catchers who are free agents in 2021. Gronk will be joining them and seems to come as a package deal with Brady, making it likely he resigns.  Then you have to look at the other side of the ball, where Lavonte David, Ndamukong Suh, and Shaq Barrett headline a large group of free agents (sportrac.com), and suddenly, spending all of that on a receiving core that already includes Mike Evans seems very unlikely.

Could the Bucs sign one of the two and then fill in their defense with the rest? Absolutely, and if this happens, my money is on Brown to return. However, with as well as those two have played, their name value and for Godwin his youth, it looks fairly likely that both receive offers that price Tampa Bay out, and Mike Evans finds himself as the lone wolf atop the depth chart in 2021.

In previous seasons, we have seen Mike Evans dominate with less competition for targets, but we haven’t seen it with Tom Brady in this offense. So the question is, what happened this year when Evans played without Brown or Godwin? The answer: Mike Evans is good at football.

Evans played four games this year without the other two members of this receiving trio, and his 16 game pace over those four games was 136 targets, 96 catches, 1,288 yards, and 16 touchdowns! That would have been good for 320.8 fantasy points and the WR4 finish on the year just behind Stefon Diggs at WR3 and well ahead of DeAndre Hopkins at WR5(fantasydata.com).

If Evans does, in fact, find himself without Godwin and Brown to steal away targets in 2021 (and I think he will), he is one of the best values in dynasty right now. He will only be 28 in August 2021 and was a WR1 this year with heavy competition for targets. He will be entering his second season with Tom Brady potentially as the only of his three most trusted targets returning (can someone remind me if trust is important to Tom Brady?). Yet, many managers are willing to part with Evans for only WR2 value (!!!), making him one of my favorite values in dynasty heading into 2021.

On that night in 2015, heads and hearts racing after an amazing concert, the answer for my friends and I was simple: Milkshakes from Cookout. And while that may not be the answer for what to do with the Tamps Bay Receivers (although milkshakes are always worth a shot), I propose that the answer here is just as straight forward. Heading into the fantasy offseason and as we approach the draft season, we know the value of rookies and draft picks will skyrocket, while the value of established studs like Evans will suppress.

I am sending out offers for Evans. I believe the value to be too good to pass up. Godwin will not come as cheap, but he is cheaper than last year at this point and is the same player, potentially heading to a less crowded situation and at 24, just starting to enter his prime.

Antonio Brown is an interesting case (stating the obvious much?), and while he has shown this year that he can still produce unless I am a serious contender, I am waiting to hear where he will be in 2021 and then selling off that hype for the best offer. At 33 years old and with his history off the field, it is hard to bet on his production continuing for much longer.

So, what now? Now we grind! We enter the 2021 offseason, ready to move and shake and looking to acquire studs like Evans and Godwin, who are poised for some of their best production yet.

One final note: check your waiver wires for Tyler Johnson. The rookie out of Minnesota flashed on only 16 targets this year, and actually (on that way, way too small sample size) boasts the best QB Rating for Tom Brady when targeted. If he was given an expanded opportunity in 2021, he could thrive, and he is extremely cheap. So, look for him on waivers, or even add him in at the end of a larger trade, but if I could add him this offseason, I would.

Does Cam Newton have a future as a starter in the NFL?
Dynasty Rebuilding Process: Part 2