What We Learned : Week 1 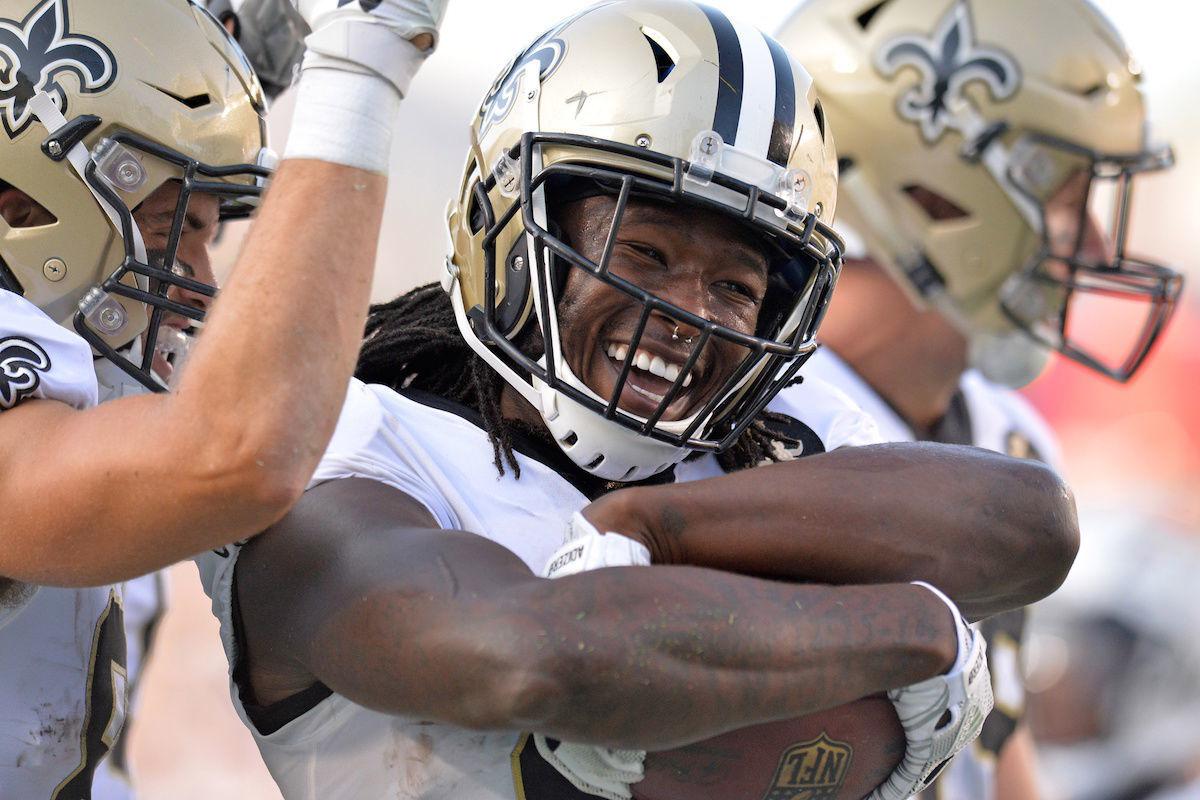 Welcome back fellow nerds to the first what we learned article of the 2018 season. It’s been a long time since I have been able to put out content at dynastynerds.com. I’m truly happy to be able to share with you my thoughts on dynasty fantasy football again. Much like last year we will go through a few talking points from the games each week along with possible buy low and sell high players and a few dynasty stashes if I see any available. I appreciate you guys being back with me for this series and hope this helps as much as possible as we start this long stretch of the dynasty season.

This topic is one of the most talked about amongst the dynasty community and one I’m very passionate about if you have followed along last season. This topic will lead off every what we learned piece this season. Six of the top twelve RBs from week one’s slate of games are in the category of “zero rb” guys. That’s 50% of the RB1’s in the first week of the season that outscored highly drafted RBs although it’s only week one this is a good sign for dynasty owners. Let’s get into some of the specifics you guys need to know going forward to help you out with this. In the opening weekend 14 RBs saw over 70% of their team’s snaps, ten RBs saw over 75% of their team’s targets out of the backfield with five players seeing 100% (Conner, McCaffrey, Kamara, and Drake). In total 22 RBs saw five targets or more this week. 16 RBs played over forty snaps for their respective teams and shockingly only 5 RBs had 20+ carries. Of those RBs with 20 carries or more, only three of the five finished as an RB1 this week. Dynasty players had some questions answered week one that should help us going forward in Tennessee Dion Lewis out snapped Derrick Henry 49 to 20, out carried him 16 to 10 and out targeted him 8 to 1. Now some may point to game flow for Lewis’ usage but the facts are here for you to see that Lewis is a really good RB in most games he’s going to be hard to keep off the field. Henry will get his usage but mostly in the same role, he has always seen a pounder back trying to wear down a defense. The pro-Derrick Henry crowd doesn’t like to hear this but this as a major concern all offseason once the Titans acquired Lewis. On the flip side, we jump to Chicago where with Matt Nagy taking over the Tarik Cohen hype has built all preseason but it was actually Jordan Howard who ran more routes and was targeted more in week one. This is a huge boost to Howard’ value going forward with this type of usage he has a very high chance to finish as a solid RB1 this season. Last RB takeaway I have is trying to make sense of the Patriots RB situation after one game, I realize I probably have a better chance of winning the lottery. The injury to Jeremy Hill suggests that the three back rotation will be the way this thing plays out much like last season. I don’t expect New England to bring in another back with all the issues at  WR. Burkhead and Michel when fully healthy should see a big portion of the carries between the tackles and in the red zone. James White has always been the back to own in this rotation he has the safest floor and has been the cheapest to acquire in dynasty by far. White is a matchup problem and trusted by Brady and Belichick but make no mistake about it the RB situation in New England is always a gamble so temper your expectations when starting any of the three on your dynasty teams.

Bare with me guys the RB report will likely be the longest talking point every week there’s just a lot there every week. Alright onto the next most of us are not happy about it but it looks like Devin Funchess has just acquired a huge portion of the target share like he had in 2017. Less than halfway through the first game Panthers TE Greg Olsen appears to have injured his foot that kept him out 75% of last season. Olsen was seen in a boot on the sidelines and has been listed as month to month with no surgery scheduled as of yet. In 2017 without Olsen, the Panthers offense did struggle but in that time Funchess was the WR21. Funchess is easily the WR1 for Norv Turner’s new offense and although we are still looking at a run-heavy offense with a huge share of targets going to McCaffrey out of the backfield this is still a huge boost to Funchess’s value. In 2017 without Olsen in the lineup, Funchess averaged nearly 8 targets a game, 81 YPG and caught four touchdowns. These numbers would suggest he can finish as a top 24 WR once again. DJ Moore has scared some people throughout the offseason since he’s been drafted by Carolina but in the first season game, he was basically the WR4 on the depth chart losing playing time to both Torrey Smith and Jarius Wright. Now I fully expect DJ Moore to play more going forward but for now, it appears it’s Funch time again in Carolina.

This time a year ago the dynasty community was frustrated after week 1 with the offensive output. Now I’m an IDP guy as most are aware but I need some scoring we play this game to see those high scores. In the opening weekend of 2018, there were 765 points scored to put that in context only one week all of 2017 saw more points scored. Top tier WRs, in particular, struggled to start the 2017 season that was not the case in week one this year. 15 WRs saw 10+ targets and five different WRs (OBJ, Julio, Landry, Michael Thomas, and Antonio Brown) saw 15+ targets. If this pace keeps up the race for WR1 is going to be fun this year. Passing offense looks to be on the rise again in 2018 and with the new rules benefiting QBs and WRs, we should see higher scoring games than we did in 2017. More points in the NFL mean more fantasy points all dynasty owners are on board with this.

TE is one of those almost forgotten about positions in dynasty fantasy football and for good reason. It seems like most owners are just like whatever if they don’t have one of the top three to five elite TEs. It’s a position that can give you an edge if you put the work in, I realize they aren’t as attractive as a flier RB or WR but guys like Gronk and Kelce don’t come around often and most players who have these guys if they’ve been playing long enough will tell you they acquired them by taking a shot late in a rookie draft or on a waiver wire. Put together some takeaways from TEs in week one to clear up the TE landscape in dynasty for you guys. Seven TEs saw 7+ targets in week 1 and the more alarming stat is the 4 who saw 6 targets or less (Kelce, Burton, Reed, and Engram). Reed was able to put together a nice week on limited targets scoring a touchdown in a blowout game. Kelce at this point is almost a sit against the Chargers defense he is almost guaranteed less than five fantasy points when playing them. Alright onto some positive stuff in the return of Andrew Luck he supported two of the top 12 TEs in week 1 both Jack Doyle and Eric Ebron finished as a TE1. George Kittle put together another nice showing against a tough Minnesota defense in his last three games he has been a top 7 TE in every game. No surprise here but still worth mentioning Gronk is amazingly good at football in his last 7 full games he’s been under  20 fantasy points one time with a 5/67/1 stat line. Gronk remains the biggest statistical advantage in fantasy football and it’s not even close to being a debate. The last takeaway was the Jared Cook show that took place in Oakland Monday night. Cook set a Raiders franchise record with 180 receiving yards and now holds that record for three separate franchises ( Raiders, Titans, and Rams). Cook was not valued nearly as high in this offense as he should be now let’s not expect him to put up WR1 numbers every week it was evident the Rams had no LBs to matchup with him. Cook definitely has this upside and for what his price was this offseason he is a huge sell high after week one if someone is willing to acquire him.

Not sure how many times this will be a talking point this season but it seemed fitting for week one. Few notes I came across that stuck out to me that I wanted to share with you guys. These are just stats that I found odd or helpful to me. Not worth talking about after one game in depth but may be helpful more as trade talks pick up and as the season progresses.

That’s it for this week nerds I’ll hit more into dynasty stashes and buy low/sell high as the weeks progress it’s a dead giveaway that Phillip Lindsay and Will Dissy are being claimed like crazy this week. There are diamonds in the rough you can always find in dynasty even in deeper leagues so always keep your eye on that. Looking forward to this weekends games I’ll keep up this content weekly trying to help as much as possible week to week in dynasty leagues. If there’s anything I haven’t covered that you would like to read about please feel free to ask I’ll do my best to cover that for you. Appreciate the support as always let’s win some dynasty championships together this year!