Who is the Next Phillip Lindsay?

Can anyone replicate what Phillip Lindsay did in 2018? @tristancook_ takes a look a which UDFA’s our money is on. 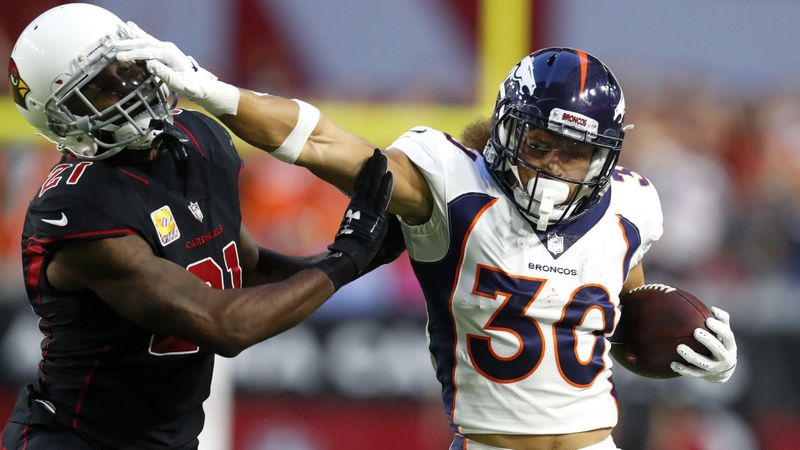 In 2018, Phillip Lindsay took the NFL by storm. He went undrafted in 2018 after rushing for the second-most yards in the history of the University of Colorado. He signed as a free agent with the Denver Broncos, earned a roster spot, and eventually won the starting RB job. In his rookie season, he amassed a 192/1037/9 rushing line, and added another 35/241/1 in the passing game playing in 15 games. Those numbers were good enough to be a borderline RB1 in most formats. Phillip Lindsay’s year was far from expected and the reality of the situation is that it is very unlikely that a UDFA is going to produce fringe RB/WR1 numbers. It would be nice if every year we could count on a UDFA to produce the numbers we saw from Lindsay in 2018, but the likelihood is that last year was an outlier. In fact, it is certainly possible that these UDFAs don’t even make the active roster in 2019. However, last year showed us that a UDFA can contribute in their rookie year. So, here are some players that I think should be on your radar (depending on your league’s roster size) as back of the roster guys.

Preston Williams is my bet for the most likely to be the “Next Phillip Lindsay”, and there are numerous reasons why. Chief amongst them is the relative lack of competition for targets. Albert Wilson and Jakeem Grant are not your prototypical WRs and have some concerns of their own. Grant has blazing speed, but ended 2018 on IR with an Achilles injury, and wasn’t able to show a ton of consistency beforehand. Similarly, Albert Wilson, who showed flashes of production, ended 2018 on IR with a hip injury. The only other names of note on the Dolphins roster at WR are DeVante Parker and Allen Hurns. Neither of those names inspires much confidence that they will be heavily targeted in 2019. At 6’4”, 210lbs, Preston Williams has the size to be a dominant outside WR in the NFL and he likely would have been drafted if not for off-field concerns. Additionally, the Dolphins are in full tank-mode, and therefore will likely be trailing in most games, which can lead to inflated fantasy numbers. As we know, Ryan Fitzpicksix likes to throw the ball up for grabs, and Williams could benefit from the gunslinger.

The Texans backfield has been anything but settled this preseason. After the somewhat surprising cut of D’Onta Foreman, it appeared that Lamar Miller was set to see a heavy workload; until he tore his ACL. Then the Texans acquired Duke Johnson. And then Carlos Hyde. Safe to say, the Texans aren’t thrilled about their RB room. However, if there is a player that could come out of nowhere to have fantasy relevance in 2019, it could be Karan Higdon. Obviously being on the practice squad rather than the 53-man roster is less than ideal, but the Texans are thin at RB, and it isn’t out of the realm of possibility that Higdon could be re-added and contribute in 2019. It’s a longshot, but it’s possible.

Hard Knocks and Oakland fan favorite, Keelan Doss, unfortunately, didn’t make the 53-man roster for the Oakland Raiders, but I think his name is worth mentioning. He showed nicely in the pre-season for Oakland, and after being cut, has since signed onto the Jacksonville Jaguars practice squad. His biggest chance at contributing in 2019 stems from the relative lack of depth at the position for the Jaguars. Marqise Lee and Dede Westbrook are the two biggest names on this roster, but neither of them are established, reliable WRs. After that, the Jags have DJ Chark-do-do-do-do-do-do (sorry I had to), and journeyman, Chris Conley. It’s certainly possible that Doss could be added to the active roster, and if he is added, he could make an impact.

The players to own in New Orleans are fairly obvious: Brees, MT, Kamara, and you can even add Jared Cook to the list. But there isn’t a question of who holds the top spot at each position. What is uncertain, however, is which other players, if any, will contribute it 2019. My longshot here is Emmanuel Butler. I wrote about him in the NFC South Deep Stash article, and I stand by my thoughts. His main competition for targets behind Michael Thomas will be Tre’Quan Smith. Smith and Ted Ginn Jr are the only WRs of note on this roster, and neither can claim to be a reliable fantasy asset. Additionally, the Saints have a history of turning big-bodied WRs into fantasy assets. Like Higdon, Butler is on the practice squad, and therefore the likelihood that he contributes in 2019 is rather slim, but he could be a UDFA that turns heads at some point down the road.

Another player that I mentioned in the NFC South Deep Stash article is Olamide Zaccheaus. He is a unique player in that he originally was a RB, but converted to WR. He is a small, shifty guy who could see production as a slot, PPR, manufactured touches type player. None of the players on the Falcons have a similar skill set to Zaccheaus, and while most of the fantasy points on the Falcons are likely to be scored by Devonta Freeman and Julio Jones, Olamide could carve out a nice role for himself. Furthermore, the Falcons have a high-powered offense that can support multiple fantasy-relevant players.

The final player on this list is former Cal RB, Patrick Laird. With the volatility of the RB position, it always seems easier for an RB to pop onto the radar. Laird is a deceptively elusive runner, and an above-average receiver, his path the fantasy relevance in 2019, like many on this list, is due to injury. Predicting injuries is an extremely difficult and often pointless exercise, but Kenyan Drake has yet to show that he is capable of being a lead back for an entire year. Laird is 6’0’, 205lbs, and ran a reported 4.56 40-yard dash. He has the size and speed to compete at the NFL level, he just needs an opportunity.

Give me follow on twitter @tristancook_ and let’s talk some dynasty. Are you in the #NerdHerd? Join for just $2.99 per month you get exclusive consensus rankings, buy/sell tool, extra podcasts and more good stuff to help you win your dynasty leagues.