Noah Ulferts dives into the pass catchers that play in the great city of Buffalo, New York. Stefon Diggs is the #1 receiver unquestionably but who will be Josh Allen’s second read? 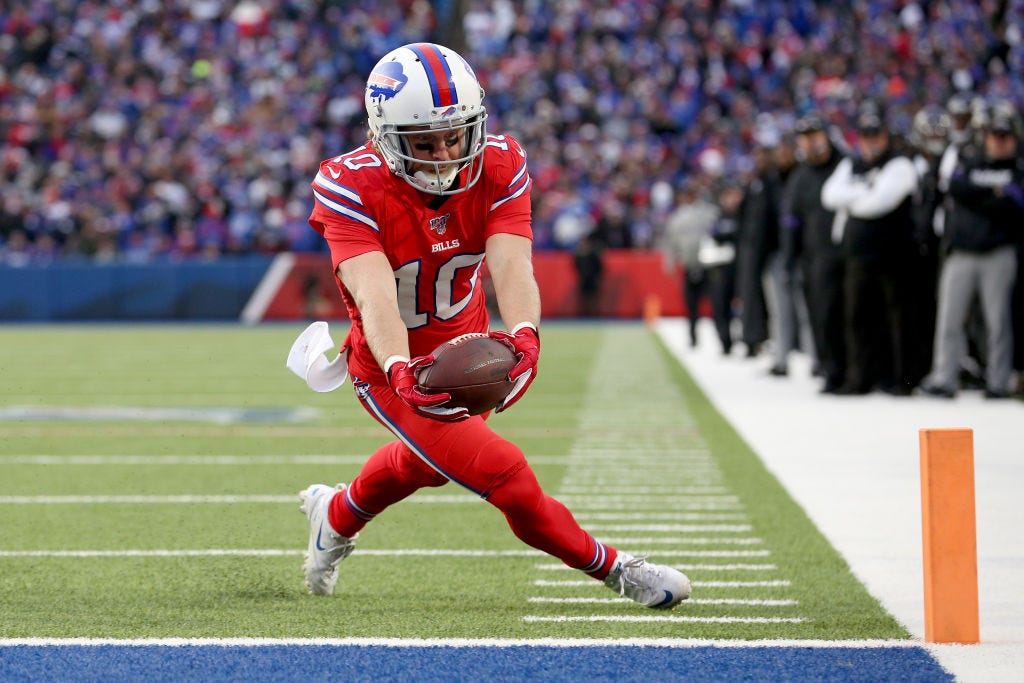 In 2020, the great soft underbelly of the Patriots was shown. The Buffalo Bills slew the football titan and claimed their place atop the AFC East.  The Bills, led by Josh Allen, threw for over 4,500 yards and 37 touchdowns.  The primary target of Allen was his newly acquired outside weapon, Stefon Diggs.

Diggs slashed opposing defenses for 96 yards a game, caught 127 of 166 passes thrown his way, and amassed over 1,500 yards in his first campaign with the Bills.  He also boasted a crazy target share of nearly 30%, which will likely grow in 2021.  Diggs played out of his mind in 2020 and it is safe to assume that his production will remain consistent.

With the WR1 locked in for Buffalo, there is a very important question that must be answered, who will be the WR2? There are three possibilities heading into the 2021 season with Cole Beasley, Emmanuel Sanders, and Gabriel Davis.

The safest bet to become the WR2 in Buffalo is Cole Beasley.  Beasley posted sneaky good stats in 2020, falling just shy of the top 20 in receiving yards.  Beasley tallied 967 yards receiving on 82 of 107 attempts thrown his way.  Entering his age 32 season, Beasley looks prime to become the WR2 once again.

Primarily a slot receiver, Beasley is not a big-play guy.  With an average target distance of 7.9, Beasley was only able to score four touchdowns in 2020. Beasley hopes to garner a few more targets when the Bills are in the red zone.  If you are in a league with full PPR, Beasley may once again be a reception machine.

The next potential WR2 is the newest addition to the Bills offense.  This offseason, the Bills lost John Brown but signed veteran wideout, Emmanuel Sanders.  Sanders is coming off a productive year with the New Orleans Saints, where he was second in receiving yards behind Alvin Kamara.  The Saints had a peculiar season due to an early Michael Thomas injury and three vastly different starting quarterbacks.  Sanders was used as a first-down mover in the New Orleans offense.  It seemed that his role on each play was to find the soft spot in coverage and get open at the first down marker.

This is nearly the same veteran role that Beasley plays in the Bills offense. However, Sanders tends to line up outside far more than Beasley.  The Buffalo Bills, in 2020, ran an offense largely built on cross patterns.  Sanders will fit in nicely in the Bills scheme and has a high chance to become Allen’s favorite receiver when scrambling.

Unlike Beasley, Sanders can be used more in the red zone.  Sanders also ranked first in the league in True Catch Rate (Total Receptions/Catchable Targets). This means that Sanders was able to catch any good or bad ball thrown his way.  Considering Allen ranked second in the league with dangerous throws, it is safe to say that Allen will be relying on Sander’s catching radius in the 2021 season.

The final potential WR2 is a dark horse to fill this position.  Gabriel Davis is two inches taller than Stefon Diggs and 21 pounds heavier as well.  The Bills lack a tight end that can lineup in the slot or out wide and Davis fills this role.  Several times last year, he was the big body wide receiver that Buffalo has been dreaming of since trading for Kelvin Benjamin.

Davis had seven touchdowns in 2020, one touchdown less than Diggs. He also ranked seventh in yards per reception and average target depth.  Davis will fill the outside role that Brown served better than Sanders and continue gaining trust from his rocket-armed quarterback.

Looking at this list of three players, I project Beasley’s target share to regress from 20% to 16% due to the addition of Sanders.  Despite playing two different areas on the field, the use of Sanders and Beasley will be nearly the same.  Sanders will most likely command a 15% target share, slightly less than Beasley due to the lack of trust so far.

The next Bills WR2 will be Davis, gaining a huge bump in target share from 2020, going from 11% to 19%.  Gabriel Davis will be the first look in the red zone for Allen as the big-bodied wideout has a natural propensity to find the sideline and win 50/50 balls.

My 2021 stat projections are as follows: