Who will be the WR3 for the Chargers?

With little experience behind the top names, it’s time to consider the candidates for targets as WR3 for the Los Angeles Chargers. 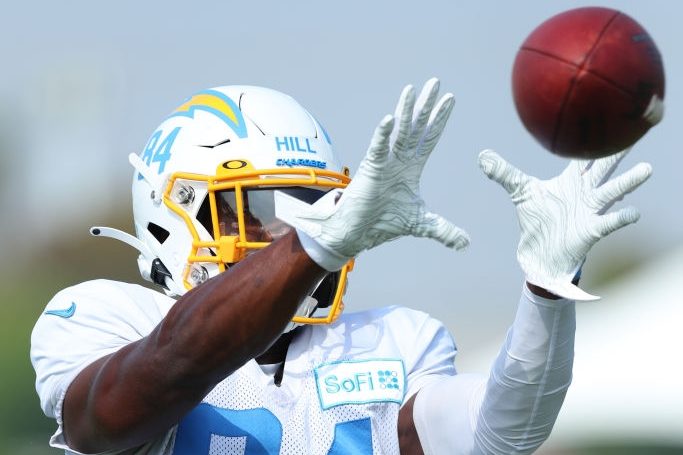 Last week, Chargers’ wide receiver Mike Williams took a hard fall in practice. Initially, there were fears he might have broken his collar bone, but instead, he’s been diagnosed with a sprained AC Joint and is week-to-week. While the team avoided a worst-case scenario and hopes to have him when they open, it begs the question, what happens if he misses time? Or what if Keenan Allen misses time?

Football is all about capitalizing on opportunity, and fantasy football is about leaving yourself in a position to capitalize on reps and opportunities for meaningful touches. While Williams, Allen, tight end Hunter Henry and running back Austin Ekeler form a stout skill-position group that figures to be the focus of the passing game when on the field, injuries are a part of the game. So, too, is the threat of missing time due to illness. All of which presents an opportunity for those behind the starters on the depth chart.

But no one’s really talking about the potential WR3 for the Chargers. That creates an opportunity to grab a player for a low cost that could return a value. So let’s consider the Chargers’ WR3 options.

The Chargers took two receivers in April’s draft, and both have an opportunity to slot in behind Allen and Williams. The more high-profile of those is K.J. Hill, who played at Ohio State University. In four years, Hill caught 201 passes for 2,332 yards and 20 T.D.s. He was taken in the Seventh Round by the Chargers, making it an uphill battle for a meaningful role in year one regardless of the strange off-season experience. But Hill has shown the ability to compete for a top college and faces a lot of inexperience on the depth chart behind Williams and Allen. He’s also practically free, as consensus WR153 at the moment. He’s a stash that could return value quickly.

The same is true for fellow rookie Joe Reed, who was snagged in the Fifth Round by the Chargers out of Virginia. Reed caught 129 passes for 1,465 yards and 16 TDs, including 77 grabs for 679 yards and seven TDs last year. Fifth Round isn’t a huge draft investment, but like with Hill, he faces little competition. AND, he’s going even lower than Hill as consensus WR161.

I use the term veteran loosely. The most experienced player behind Allen and Williams is Darius Jennings. He played for the Browns in 2015 and was with the Titans in 2018 and 2019. He caught 14 passes for 117 yards in his lone season with Cleveland, catching 13 passes for 118 yards in two years with the Titans. Jennings has experience, but not a ton of experience.

Finally, there’s the receiver currently listed as WR3 on the depth chart, Jalen Guyton. Guyton has one prior year of experience being in the NFL, but no actual on-the-field stats after being signed as an undrafted free agent. He came out of North Texas University, where he caught 103 passes for 1,580 yards and 15 TDs over two seasons. And he might be the best value of all, currently going as WR355. That really means no one is looking at him, and yet reports are he’s getting some first-team reps.

The Chargers don’t figure to be a top-end passing offense with either veteran Tyrod Taylor or rookie Justin Herbert at the helm. The team already has a robust set of starting options at wide receiver. But they’re one injury away from someone new getting a prominent role. And even if that doesn’t happen, the third receiver in any offense has value. So what to make of the candidates.

Currently, Guyton is listed as WR3 with Jennings, Reed, and Hill listed as reserves. It’s possible they all make the active roster or that only some of them do. The question is value. Guyton seems to be the leader to get the first crack, which makes sense, given that he has a year already in the system. The Chargers invested in Hill and Reed in the draft, and both figure to get a chance to compete. I liked Hill’s potential based on his college production, and he has a chance to be relevant, but likely with a lower ceiling. If I’m looking for the best shot of production in 2020, Guyton seems to be worth a stash. Looking long term, Hill is the guy I’m sticking on my Taxi Squad.