Claypool has been loud about how he should see more snaps, but not with his mouth. His play on the field in week 1 spoke loud and clear despite limited snaps. Check out ‘why’ week 1 indicates future success with @FFB_Vern. 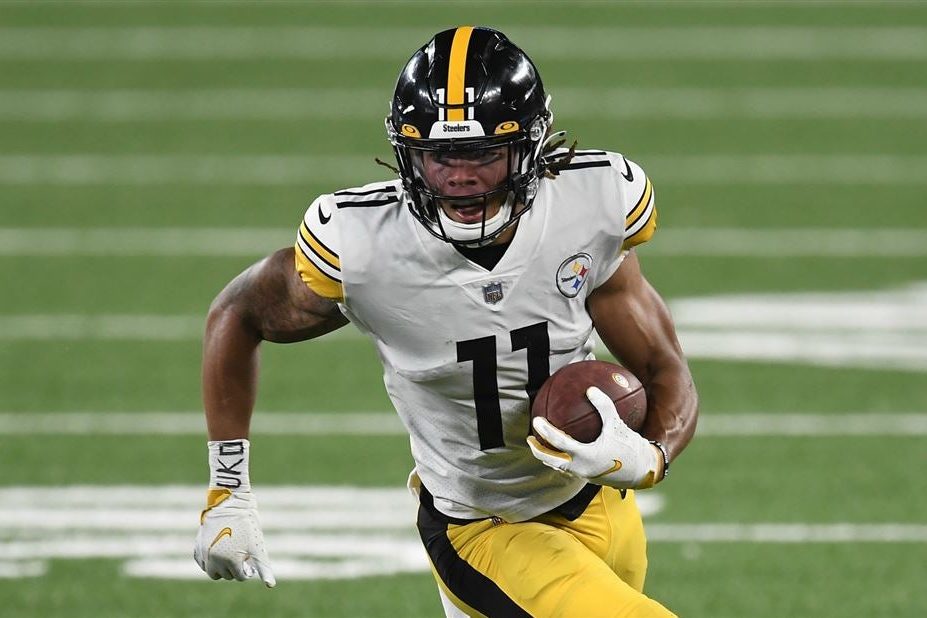 Highlight scouting is often a trap, but we cannot ignore what we see. We have to dig into the tape to see if there is more to the highlight, and better yet, identify other positive indicators. As far as Chase Claypool is concerned, he has shown good translation of his skills to the NFL-level in his limited snaps. Plain and simple: his small sample is showing he could garner more snaps soon.

Three major obstacles currently obstruct Claypool’s playing time: Juju Smith-Schuster, Diontae Johnson, and James Washington. We know Juju is here to stay. Diontae Johnson seems to bring some versatility to the offense, and Washington, who has been featured as a deep threat with contested catch ability. An additional obstacle is learning the playbook, which can plague any rookie, but there are no current indicators of concern there.

Given this receiver corps, the opportunity for Chase to carve out his role seems slim. His best opportunity will come with learning the playbook and trying to supplant Washington as a bigger and faster downfield contested-catch threat. Washington is nearing the end of his rookie contract, and the Steelers could cut him for less than $400k in 2021. It is unlikely that the Steelers would cut ties being that Washington only costs a little over a million dollars next season.

The lack of money motivation from the franchise points our focus to their on-field ability. Looking a look at their combine metrics, we can see the following advantages Claypool has over Washington:

If we assumed all else is even with their on-field abilities, most would prefer height and vertical explosiveness advantages we see here in a contested-catch player. Perhaps the most attractive thing is the size-speed combination that Chase Vernon identified as only the second of its type. The real question is: “Can Claypool put it together on the field?”

As alluded to earlier, highlights, like statistics, are indicators that should have us look deeper. Let’s look at the highlight that got my attention in this Monday Night Football game.

You have seen this play by now, but just in case you haven’t seen a breakdown of it, here you go. Cornerback posture and safety depth indicate Cover 2 with Claypool facing a press look. This provides three distinct areas to target, as shown in the clip.

Claypool works a speed release to the outside against James Bradberry, who is able to crowd Claypool to the sideline. Getting crowded to the sideline is a red flag if it occurs consistently. In this context, it simply allows Claypool to get to the exact spot he needs to attack. Outside receivers want to get to the outside against this coverage to minimize the deep safety help.

His explosiveness allows him to get about a half-step ahead of Bradberry. Then he shows the body control to turn toward the line of scrimmage, locate the ball, and make a couple of steps backward before elevating off one foot to make this catch. He also shows off an NFL-quality toe-tap demonstrating his sideline awareness. DynastyNerds has already been on top of these qualities; just take a quick look at Jon Diment’s draft profile on Claypool.

To sum it up on this play, we see:

We also see something to which we want to pay attention: maintaining the ‘red line.’ As mentioned earlier, a trend in getting bullied off of your line is cause for concern. On a positive note, being targeted in that situation (3rd & 9, down 3 points) indicates the passer trusts the receiver to win. Trust like that (confirmed by Big Ben’s own words) this early is almost a more important takeaway than the play itself.

The highlight play is great, but responsible scouts would look for more evidence of upside. Some of that evidence will come on plays where our prospect simply isn’t targeted.

How a receiver deals with press coverage and the jam are of particular interest to me when scouting them. Can they use their hands to defeat the jam? Can they release in multiple ways? Are defenders manipulated by the receiver’s nuance?

On this play in the second quarter, we can add the use of hands to the pile of evidence. Not only did he (top of the screen) defeat the jam with ease (quickness and play strength), he got more than a step on Ballentine. Ballentine was fortunate that Juju came screaming wide open over the middle because this could have been a 25+ yard strike. Continue evaluating Claypool against the jam; if it continues to be positive, we should consider him a riser.

In the third quarter, Claypool (bottom) works Bradberry again, but differently this time. Remember, in the highlight of how he simply used a speed release to the outside? Well, this time, we see him use a wide outside release to swim back inside, putting him in a position to stack the corner again. This shows that he is approaching each snap with a plan; he is playing more chess than checkers. Based on this release move, we can move his release from solid to good against the press.

This was essentially Cover 2 masquerading as a single high safety, giving Bradberry top cover. However, it would have been essentially the same circumstances/outcome as the highlight, just with more room underneath. Winning early in routes affords big-play opportunities.

Continue watching Claypool closely and build your pile of scouting evidence to learn who he can be. What am I looking for? In addition to the consistency of the awesome things we have seen here, I am looking for an increase in snaps, some evidence that he can win against zone, and a little more diversity in his route tree. It has only been one game, and he is a rookie, so it could be a while on the route tree. As long as he has the nuances in his release and the hands/body control/catch radius we are seeing in this game, it is time to buy. Nate Christian expected a learning curve in his Pittsburgh Fantasy Forecast, but if these indicators prove consistent, Claypool could smash those expectations sooner than we expect.

I’ll be keeping an eye and other rookies that hit the field this season. There are more big plays to be had by rising talent, but is it fact or fiction? Only tape study will tell the tale. In the meantime, stay tuned to Dynasty Nerds, and check out the DynastyGM tool if you haven’t already. It is a time saver for sure! Follow me @FFB_Vern to see what I’m seeing through the NFL season.