Why Tyler Boyd is the Bengals Receiver to Own

The Tyler Boyd disrespect is real. Dynasty GMs believe in Burrow, but aren’t projecting a bump in production from Boyd? @FFB_Vern tells you why it’s time to buy. 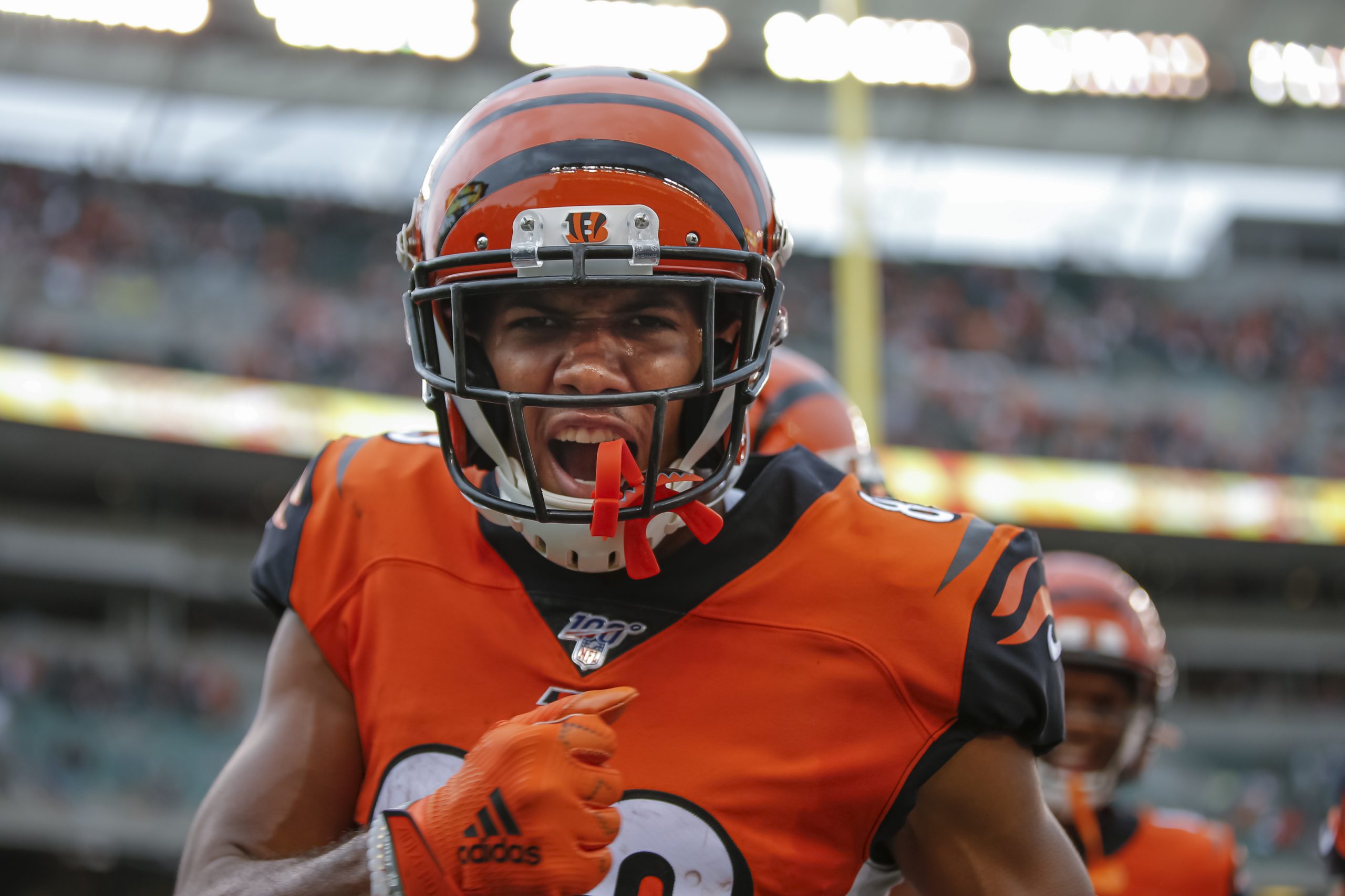 Why should we buy Tyler Boyd? No matter how good he is, a rookie quarterback could be a discouraging element for receiver upside. The return of a former Pro-Bowl receiver surely detracts from Boyd’s upside, right? Why should we invest when there are so many question marks?

First thing’s first; Boyd’s value is quite simply too low. Currently, he is sitting around WR34 rankings-wise despite finishing as WR18 in 2019. Dynasty GM indicates Boyd is between a ’21 1st and 2nd in value, but this is ideal for championship runs if in need of receiver help. Boyd provides a solid floor and a fairly even production curve with good QB play.

Surely, his dip in value has to be related to Andy Dalton‘s decline in 2019. During last season he also had to play three games with Ryan Finley. 2018 was a better season with higher quality play from Dalton until he was injured in week 12. We can see in the following line graph that there were double the 20+ point performances in 2018 compared to 2019.

Joe Burrow has probably gone as the 1.01, or at worst 1.03, in your dynasty rookie drafts this off-season (assuming SuperFlex leagues). His final season with LSU in 2019 was nothing short of stellar. He shows great promise, even stepping into a seemingly poor situation. A quick comparison of Burrow’s college career to Dalton’s:

Burrow’s 2019 season nearly doubled production in 2018, and his 2018 was still better than Dalton’s best season at TCU.

Clearly, there is a lot of contexts that feed into these performances; different decades, offenses, football programs, etc. The point is our 10,000-ft view from the stats shows that Burrow is a completely different beast than Dalton. If Burrow’s college ability translates to the NFL, Cincinnati could have a quicker than expected resurrection to competitiveness.

Why These Stats Carry So Much Weight

Why is that comparison so important? It’s a different team and offense for Burrow, right? This is true, but to understand the answer, we need look no further than Justin Jefferson. Jefferson played virtually all of his snaps in the slot or tightly aligned, and we can see his productivity below:

Yes, these are college stats, but as much as we value target share, it is worth noting that Jefferson had the bulk of it in 2018-2019. His route tree distribution was heavy on Outs, Seams, Digs, and Slants: a great combination of routes, especially from the slot. “Ok, Vern, so what?”

Boyd was one of the wide receivers I had the pleasure to watch during my time at the Scouting Academy. He was legitimately, the best receiver of the five I watched and certainly the best route runner of the group. Based on my evaluation, there was little concern that he could succeed as the WR1 in the absence of A.J. Green.

Boyd shares a similar build to that of Jefferson; 6’2″, 203 lbs compared to 6’1″ 202lbs. Additionally, their route distribution and ability to succeed in the slot is very similar. The biggest difference between them is their 40-yard dash time, where Jefferson is superior. Unfortunately, Jefferson didn’t do the full gauntlet of combine drills, so we could not compare them completely.

Tyler Boyd’s four years of NFL experience are sure to make up for the difference in foot speed. While he is experienced, he is only 26 giving him at least four more years of similar production. Slot receivers have more longevity it seems; just look at Julian Edelman!

It’s All About Chemistry

Boyd has been looking at the potential synergy since it was virtually guaranteed the Bengals were getting the first overall pick. Likewise, we should be excited. Of course, chemistry has to manifest on the field, but the dynasty community is simply too low on Tyler Boyd. Certainly, the lower valuation is due to lack of evidence, but the cost-benefit analysis weighs heavily in favor of the benefit if we, and the Bengals, are right.

Let’s assume the chemistry comes as expected; let’s look at some of the abilities Boyd offers to ease Burrow’s transition to the Pros. Here is my synopsis of Boyd from my Scouting Academy rough draft report:

“Overall, starting Slot receiver, with some versatility to play the X or Z, will be a reliable target in the short and intermediate areas of the field. (1) His quickness, especially on free releases, is how he will win in the short areas of the field. (2) In the intermediate areas, his aggressiveness and play strength are what he will use along with his ability to set up his breaks with stem and footwork at the breakpoint will give him separation needed to succeed. The catch radius he boasts will give passers the confidence to know he will go up and get the ball while allowing them to throw him open on Digs, Outs, and Crossers. (3) His quickness on the critical routes like the dig, out, curl, comeback, hitch, and pivots will make him a reliable possession receiver. In the running game, he needs to improve his competitive toughness away from the play because, at its current level, potentially leaves “meat on the bone” of some plays.“

Keep in mind this synopsis was from one of the earliest reports I wrote. While the report may leave a lot to be desired from a report quality standpoint, the gist of the assessment shouldn’t. Notice the numbered statements in the synopsis; here are some visual aids.

In the above clip, we can see his quickness and wider understanding of the play design to maximize the natural pick on the release. Not seen here is the plethora of hand moves and footwork he uses to defeat the jam consistently.

We can see evidence of his hand moves on the next clip, but most importantly, we see his play strength. He simply imposes his will as he pushes vertical. The textbook plant foot in the DB’s kitchen at the break creates a ton of space on this Dig route.

This snapshot at his ability to manipulate safeties with route running nuance is what presents explosive play upside.

In this last clip, we see one of the most important aspects of a good slot receiver: competitive toughness. This was captured in the main report, but my synopsis failed to highlight it. Look how Boyd is able to find the best possible spot between these two defenders. Pain is surely coming in situations where a safety and linebacker converge. Many receivers do not succeed in these situations as the idea of getting blown up is a distraction at the catch point. Boyd consistently shows focus and concentration over the middle of the field despite imminent contact.

To see why Boyd is the receiver to own in Cincinnati, we have to accept reality. Burrow is a rookie; he has some growing to do. Boyd’s ability on lay-up routes (in-breaking routes like Digs, Crossers, Slants) is going to be a nice security blanket (i.e., more targets). It’s premature to say A.J. Green is washed, but we have to be realistic about his inability to finish seasons as of late. Additionally, we have to look at the target distribution in Burrow’s last two years at LSU. The heavy targeting of the slot receiver resulted in Jefferson being the target leader during that span. Rational coaching would suggest they will lean into Burrow’s strengths, which may result in lower usage of Green.

The writing on the wall says Boyd is the receiver to own. Are you ready to jump on that train with me? Follow me, @FFB_Vern, for more fantasy thoughts and opinions to challenge your perspective.