Why You Need To Stick With David Johnson 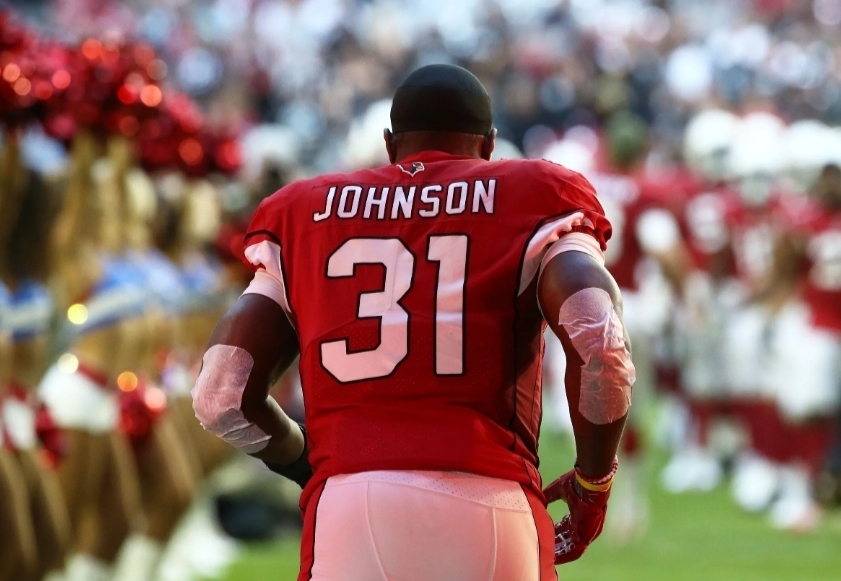 Since the end of the 2018 fantasy season, I’ve heard several dynasty owners talk about their frustrations with David Johnson. I can understand these frustrations but I think everyone needs to relax and I’m here to help you see why.

We saw DJ show some flashes early on in his rookie year before we really saw the true potential towards the end of 2015. After Chris Johnson went down with a fractured tibia, Bruce Arians gave David Johnson the start and the rest is history.

In 2016 we saw him go on to put up BIG numbers with 2,118 yards from scrimmage, 20 total touchdowns, 80 receptions while averaging 4.2 YPC on 293 attempts. After seeing him perform throughout the 2016 season you couldn’t help but think that these were realistic numbers that he could put up every year with maybe the exception of that many touchdowns.

Going into the 2017 season, Johnson declared that he wanted to have a 1,000/1,000 season and everyone was on that train with him. Unfortunately, in week 1 he suffered a dislocated wrist in a game against the Lions and that broke the hearts of many dynasty owners. I know that I was one of them.

The only upside that we saw in 2018 was the fact that he played all 16 games. The hopes were high after signing his extension and declaring yet again that he wanted that 1,000/1,000 season. Everyone was still hanging onto those 2016 numbers and were disappointed in 2018. What most owners that I have had these discussions with are failing to realize is that DJ was the number 10 fantasy RB in 2018. He quietly put up 1,386 yards from scrimmage with 50 receptions and 10 touchdowns. Keep in mind that he did this in what was an overall bad situation.

I know a lot of people are looking to sell Johnson and I’m saying you should hold him or buy him. However, be aware of the value you give up for him. Some are still looking for “top dollar” while others are looking to just get out with some value. I would say you would have a good chance at buying him by giving up a mid to late tier 3 RB with a late 2020 1st round to early 2020 2nd round pick. Pay absolutely NO HIGHER than that. Remember, in dynasty, you utilize players in a 2 to 3-year window unless you get certain generational talents.

With that being said, Johnson is 27 years old and that would put him at the age 30 rule for running backs. What we need to remember is that Johnson is a young 27 and what I mean by that is in 4 seasons he only has 751 touches and if you project from what he did in 2016 he would be around 1,250 to 1,300 touches at this point. Needless to say, David Johnson does not have a lot of miles on him and he will be turning 30 at the end of the 2021 season. Johnson will be a focal point of the new system that new head coach Kliff Kingsbury brings to Arizona.

Kingsbury brings the air raid style offense to Arizona which has a good history of running backs being productive. Granted it’s a whole new level in the NFL but spread offenses have been integrated now for a while and the air raid is just a variation of it.

The purpose is to get the ball out quickly to your playmakers and allow them to work in the open field. Arizona has a few playmakers for rookie Kyler Murray to work with. Fitzgerald came back for another year. Christian Kirk is entering his second season. They drafted wide receivers Andy Isabella and Hakeem Butler. David Johnson is the player I believe that will benefit the most over the next 2 years.

Kyler Murray is electric but the game speed will be different. Fitzgerald will most likely be gone after this season. Kirk, Isabella, and Butler will still have some growing pains at different levels. Again, this leaves David Johnson.

The air raid tends to run a 4 wide-single back set or trips formation with one wide and a single back. You can motion the running back to help diagnose what the defense is doing. Why I love DJ in this offense is that in those sets, he can do anything. Want to send him on a wheel route or use him on a swing pass? Johnson has you covered. Want to audible at the line and hand it off? DJ all day. Need him in pass pro to take a shot downfield? Johnson has you covered there too.

Johnson is the closest player to Murray on the field and he’s also the best playmaker on the field too. We all know how great of a runner Johnson is but what I want to focus on here is the skill set that he has as a receiver. Let’s look at a few plays from last season where he is a receiver out of the backfield or lined up in the slot.

The first play I want to look at here shows DJ lined up in the slot. He runs a natural pick route and the LB decides to go underneath which makes it easier for Johnson to get separation. The best part to me is how he tracks the ball over his shoulder and catches it in stride.

Here we see play action from Rosen. Johnson gets through the line, hesitates, and heads to the sideline. Rosen throws the ball back shoulder; Johnson adjusts and brings it in for a 20-yard reception. This play shows again that he has good ball tracking skills.

This play here against KC, Johnson simply leaks out of the backfield and Rosen checks down to him. Notice how he quickly plucks the ball, tucks it, and gets his eyes upfield to get the first down on a third and seven.

This last one here is a drawn up delayed screen pass. Again, this shows his hands and field awareness. Uses his hands to catch the ball and quickly gets upfield for a 25-yard gain.

Johnson is a great runner and is also very good in pass pro. All of these skill sets are why he is a true three-down workhorse. These skill sets are also what is going to make him dangerous in this system. Being able to spread the field will open things up for his playmaking abilities.

Johnson being the ultimate safety valve for Kingsbury and Murray in a system that can utilize his skill sets is why I think we will see him get the volume that he did in 2016. Seeing that kind of volume gives him every opportunity to achieve that 1,000/1,000 season that he talks about and still has his eye on. I wouldn’t say that it’s out of the realm of possibility either because Kingsbury is planning on running 90-95 plays a game in which Johnson has been training for.

This is why I firmly believe that David Johnson owners need to hold onto him. If you don’t own him, try to buy him. Remember what I stated earlier though about his price. You should be able to get two more top 10 seasons out of Johnson and look to sell him before or during the 2021 season.

Johnson was very productive in an aggressive offense with Bruce Arians that loved to air the ball out but also valued the running back position. Keep in mind too that this offense was run by an aging Carson Palmer with bad knees and DJ was no secret. Kingsbury’s system is also aggressive in airing the ball out while utilizing the running back position.

David Johnson could very well be a top 5 fantasy running back this year, especially in PPR formats. I know that seems bold but that’s what I think. Right now, he’s being drafted at the end of the first round, beginning of the second round in dynasty start-up drafts, allowing you to get some good value in my opinion.

Hopefully, this has opened your eyes to see through the clouded perception of where David Johnson is at in his career and what he has left to provide. He’s in a young offense with a young head coach. I know that sounds scary but what it will guarantee is volume for him, and in fantasy football, volume is king.

Why Antonio Callaway might actually be the second best option in Cleveland
32 Teams in 32 Days: New England Patriots