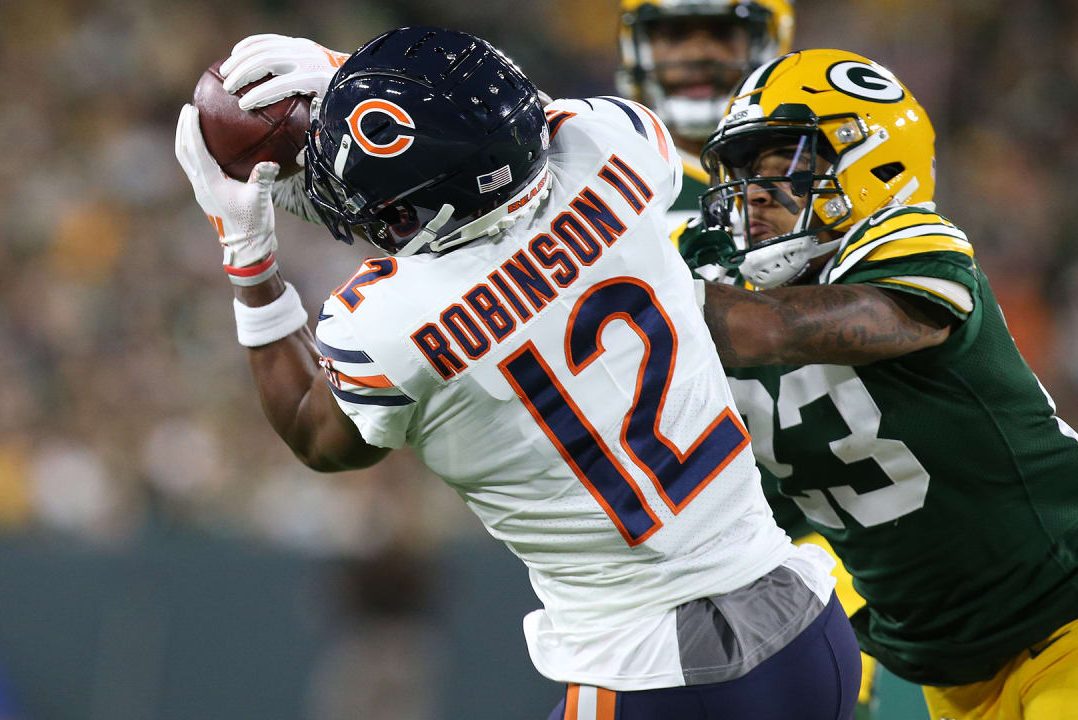 It’s never to early to start looking towards next year. For the world of dynasty fantasy football, there is no offseason, and you always have to be looking forward. You need to be on the lookout for players that have seen their value take a hit that you’re expecting to see it rise next year. Some people are looking to bolster one position over another, but wide receiver is the one that should always have your attention.

Wide receivers have the most staying power, as evidenced by the fact that Julio Jones has been a WR1 basically since he entered the NFL. Compare that to the carousel of running backs that we’ve seen over the last couple of years, and it makes no sense to try and build around them. Wide receivers are a different story.

For that reason, today, we’re looking at a few names that you should be targeting in trades and drafts leading up to next season. These receivers are in a position to have their stocks rise over the next couple of years to become permanent fixtures on your team. Some will cost more than others, but, at the end of the day, you can’t put a price on winning championships.

We’re starting with one of the big guns. OBJ is one of the most well-known players in football over the last six years. He made one out of this world catch on Sunday Night Football, and his stardom skyrocketed in a matter of hours. He’s been one of the top-selling jerseys over the last five years, and he was consistently one of the best wide receivers for fantasy football. After sustaining a significant ankle injury in 2017, he didn’t have the same pop over the last two years.

For that exact reason, he should be targeted in every way, shape and form for dynasty leagues this year. He was playing last season in his first year with the Cleveland Browns, and he was dealing with multiple injuries throughout the year that required surgical repairs this year. He’s gone over the 1,000-yard mark in five out of his six seasons, and, in the 2018 season, he played just 12 games while putting up 1,052 yards.

Beckham is the top receiver in Cleveland. I’m not taking anything away from teammate Jarvis Landry, who is quite talented in his own right. However, I am saying that you should be buying Beckham’s stock right now. His ADP is carrying him to the end of the second and beginning of the third round. Owners are souring on him, and, with an improved offensive line for the Browns, Baker Mayfield is poised for a bounceback season. You should be buying OBJ wherever you can.

Poor Allen Robinson can’t catch a break. After dealing with Blake Bortles for years, he went to Chicago, where he’s had to struggle through the ups and downs of Mitchell Trubisky through two seasons. Similar to Beckham, his 2017 season was lost due to a torn ACL one catch into the year. After a quiet 2018, which should have been expected following the injury, he had a solid 2019 that saw him get 98 catches for 1147 yards and seven touchdowns. He also caught a career-high 63.6 percent of his passes.

Despite his boost in production last year, you can still get him in the WR3 range, when he’s a solid WR2 at worst. A quick look at what he has going for him heading into next year. Taylor Gabriel and his 48 targets have left the building. Some of those will go to Anthony Miller, who is another interesting guy to look at, but Robinson is still going to get more looks. Chicago brought in Nick Foles to compete with Trubisky. Robinson will get a better quarterback, no matter who it is.

Throw in the fact that Robinson is only 26, turning 27 in August, is a full year younger than Beckham, he’s still got a few years of production left on the tires. Young wideouts are the hot commodity, but Robinson is a proven receiver that will give you consistent output every week. You can worry about the quarterback situation all you want, but they’ll likely be throwing to one of two guys. Robinson is one of those two.

Oh, how the mighty have fallen. At this time last year, Will Fuller had an ADP in the 70s. Fast forward one year, he’s down into the 100s. He’s heading into his fifth season with the Houston Texans, and he’s shown the ability to be productive in the past. His only issue has always been with injuries. He’s never played more than 14 games in a season. So, why should we be looking to buy him now?

Fuller is a lottery ticket right now. His owners have soured on him after years of being betrayed by his injuries, and his price is never going to be better than it is right now. You can trade for him by giving away nothing of value because no one else is viewing him that way. He’s a touchdown-maker, and he makes big plays happen. In the last two years, he’s caught 69 percent or more of his passes. He catches everything thrown in his direction.

I’ve also been ignoring the pretty large elephant in the room, which is that DeAndre Hopkins was shipped off to Arizona by Bill O’Brien last month. The next-best receiver on the team is Kenny Stills, who is not built to be a lead-dog receiver. Deshaun Watson has no one else to throw the ball to. As long as Fuller stays healthy, he has a sky-high ceiling that he could approach this year.

Now we’re getting into the guys that fewer people are going to be thinking about. They don’t have the big name, or they’re the second guy on their team. Diontae Johnson qualifies as both. He was selected right at the start of the third round, which gives that draft capital that you’re looking for receivers to have. He’s not the biggest guy in the league at 5’10” and 183 pounds, but that didn’t matter last year.

Where should I start? Johnson led all rookies in receptions last season. He had more than D.K. Metcalf, A.J. Brown, and Terry McLaurin. He also did that while catching passes from DEVLIN “DUCK” HODGES and MASON RUDOLPH. Take a minute to let that sink in. Moving on. He was number one among all receivers in yards of separation on receptions at 3.6 yards. If you get open, your quarterback is going to find you.

Ben Roethlisberger is healthy this year. Johnson will be the number two target across from Juju Smith-Schuster, which will give him easier assignments, and he has the chance to develop into the new Antonio Brown this season. I’m not comparing Johnson to Brown. I’m just stating that, with an average depth of target of 9.2 yards down the field, it’s not like he’s running fly routes on every play. Johnson is being drafted just one round ahead of Fuller, and he’s two years younger. Easy money for me.

His price could very quickly depreciate later this month, depending on what the New York Jets decide to do in the draft. Even if they do, Jamison Crowder deserves your consideration for a few different reasons. For one, Crowder finished as WR32 last season. His ADP before last year had him as a WR5. That hasn’t changed this year with an ADP of 123 or WR54. He’s being drafted in the 10th round or later of 12-team leagues. Why wouldn’t you want him?

The Jets are likely to add a pass catcher, and they’re one of the rumored teams to grab one in the first round. Even if they do that, he’s the only pass catcher on the team that has any chemistry with Sam Darnold. Breshad Perriman has joined the team, but, again, he hasn’t had the opportunity to play Darnold to gain any chemistry. With limited offseason work, Darnold is likely going to have to lean on the targets that he’s familiar with.

Crowder is a dirt-cheap receiver that saw 122 targets last year, and I expect that number to go up this year with the questionable offseason that we have ahead of us. You’re not going to have to pay a premium to get him, and he’s only 27, although it feels like he’s been around much longer.

I don’t enjoy the fact that Hunter Renfrow is going to be 25 by the end of the year. He’s older because he stayed in college forever. I can live with that because, no matter what quarterback is throwing him the ball this year, Renfrow is going to be seeing an increase in his volume. Volume is king in the world of fantasy football, and Renfrow, similar to Crowder, will consistently put up good PPR numbers because he catches everything thrown his way.

Renfrow caught 69 percent of his passes last year, and he had just four drops. Among receivers with at least 50 targets, he was second in his efficiency with yards after the catch. For every air yard, he had 1.22 receiving yards. That yards after catch ability is how you make sure you stay on the field more. Coaches always want guys that can make plays with the ball in their hands.

Oh, I almost forgot, remember that yards of separation stat I talked about earlier? Renfrow was right behind Johnson with 3.5 yards of separation. He always found a way to get open, and that makes life easier on your quarterback. Renfrow is never going to be the guy that puts up the incredible receiving yards numbers. His strength is going to be in PPR, where catching everything thrown his way is the reward. Grab him in the 10th or 11th round and profit.