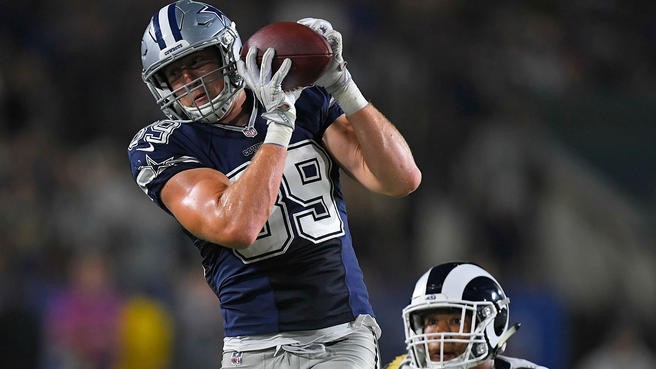 On April 26th, 2018, Cowboys legend Jason Witten traded in his cleats for the booth. It left a giant chasm in the Cowboys’ passing attack. Couple that with the departure of Dez Bryant and the void remains even bigger.Initially, the dynasty community was thinking the void may be filled by former basketball prospect, Rico Gathers. However, with his raw attributes and recent injury history, it no longer appears to be the case. If you’ve listened to the latest podcast, “Winning in June”, Rich and Matt discuss their excitement for Blake Jarwin. So, who is he?

Jarwin is a UDFA from the 2017 draft out of Oklahoma State. He was promoted from the Cowboys practice roster in October 2017 because the Cowboys were afraid that he would be poached by other teams. Coming into OTAs, Jarwin began receiving quite a bit of praise. Dallas Morning News’ Jon Machota reported that “No tight end on the roster has received more praise recently from executive vice president Stephen Jones”.

Following on from that, Cowboys reporter Marcus Mosher noted that “Jarwin worked as Dallas’ No. 1 tight end during OTAs and minicamp.” Obviously, this raises interest as there are 243 vacated targets in Dallas, and although Hurns and Gallup will absorb some of that, there will surely be other options. Dallas’ run-heavy offense should open up countless big plays through play action.

The 6’5”, 260 pounds, the 23-year-old tight end didn’t blow your socks off in college. His best season only produced 309 yards and 2 TDs in his best year at Oklahoma State. All the while, Mason Rudolph was orchestrating quite a productive offense, so it’s a little disappointing to see. A breakdown of his college stats can be seen below:

During his time at Oklahoma State, Jarwin ironically played the “Cowboy” role in the offense, which features as a hybrid fullback/tight end. As such, he played an incredibly versatile role in the offense and lined up everywhere…. something that’s becoming increasingly popular in the NFL. He showcased his offensive skills in the backfield, from the slot, split out wide, and in-line. His offensive skillset with silky routes and ability to grab contested catches is likely what has Dallas so intrigued.

NFL.com’s Lance Zierlein spoke about Jarwin in his pre-draft analysis. He concluded, “Unexciting statistical production belies his potential as a pass-catcher on the next level. He has the necessary athleticism, uncover, and toughness to work both the first and second levels of the defense. Jarwin needs work in the weight room and as a blocker in order to handle reps as an NFL tight end. He has eventual starter potential and should find a spot on a roster as a rotational tight end

It’s rare that you find such obvious opportunity for a young player on your waiver wires in dynasty leagues. It can’t hurt to take a chance on Jarwin if you have an open roster spot as he is likely in a better situation than the last guy on your roster. This may be your last chance to pick him up if he’s still available.