There’s already been 5 Wide Receivers from the 2018 Draft Class that have had a top 24 campaign. Here’s two more that could make the leap in 2020! 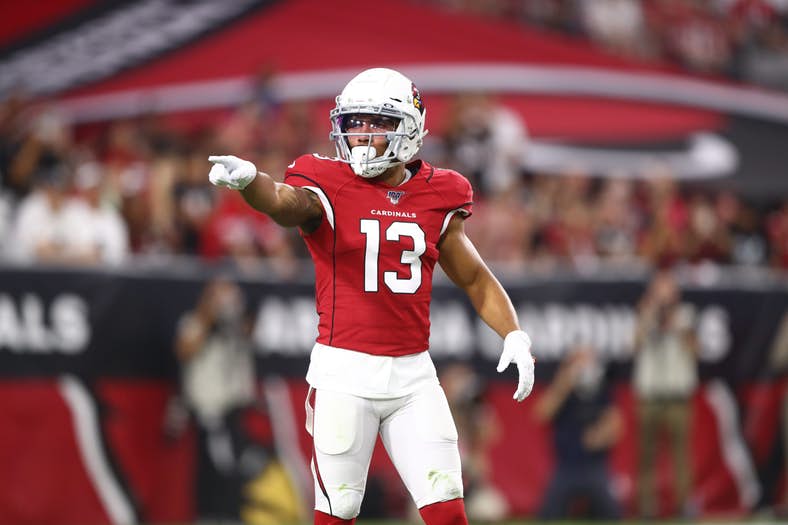 Year Three – The make or break year for many Wide Receivers at the NFL level. We’ve seen for years it often takes receivers two years of learning in the NFL, before a big season in year three. A few in recent memory include Cooper Kupp, Chris Godwin, and Kenny Golladay all putting up monster 2019 seasons.

The 2018 draft class is now entering year three, and it’s low-key stacked at wide receiver. We’ve already seen top 24 campaigns from DJ Moore, Courtland Sutton, Calvin Ridley, DJ Chark, and Michael Gallup. There are still at least two more targets that could approach this WR2 threshold in 2020. At the very least, I believe these two can be great flex options.

Larry Fitzgerald’s announcement that he’s decided to return to the Cardinals for another season has presented one last buying window for Christian Kirk. Here’s why the juice might be worth the squeeze.

The Arizona Cardinals went from the 29th most pass attempts (495) in 2018 to the 16th most attempts (554) in 2019. It’s safe to say Kliff Kingsbury is just going to watch this number grow in 2020. As dynasty darling Kyler Murray enters year two, we should see improvement from the Cardinals offense. Murray should have the opportunity to sling the ball more freely in the coming year, and this should benefit his receivers.

There are only 24 wide receivers that can be a WR1 or WR2 in the NFL next year. Why would the number 2 option in Arizona be one of them? Well, Kirk showed in 2019, he’s taken over the target share in Arizona. In games where Kirk and Fitzgerald were active, Kirk saw a target share of 23.3% (4 points higher than 2018). In contrast, Larry recognized 19.4% (2.4 points lower than 2018) of targets. As Fitzgerald ages, this discrepancy should only grow.

With the introduction of the “Air Raid Offense” last season, Christian Kirk’s 16 game pace increased by 42 targets, and 26 receptions. Kirk also went from playing 79% of plays to 94%. Oddly enough, this increase was not reflected in his touchdown totals. No, Kirk’s not a big goal-line threat, but we have to expect Murray’s TD ratio of 3.7% to increase. I don’t think 6 touchdowns is an unreasonable total for Kirk in 2020. Further, if the Cardinals enter the top ten in pass attempts, Murray could throw the ball 600 times in 2020. At Kirk’s 2019 target share mentioned above, that would give Kirk an unworldly 140 targets! 80 receptions for 1,000 yards and 6 TD’s is in the Cards for Kirk if he can stay healthy. Those numbers would’ve made him a WR2 in 2019, and I don’t believe it’s his ceiling.

There are rumors flying that Steve Keim will use the 8th overall pick to draft another Oklahoma Sooner, Ceedee Lamb. The Cardinals used 2nd and 4th round picks on wide receivers in the 2019 NFL Draft. It’s not out of the question for them to invest a 1st round pick this year. The hope is the Cardinals realize they need to protect their franchise quarterback, and draft the likes of Tristan Wirfs instead. The Cardinals also have a pre-draft Rich Doctson favorite on their roster in Hakeem Butler. After missing his first season due to injury, he could have an impact in year two, but it shouldn’t offset the Cardinals overall growth.

Takeaway on Kirk – If you can get him for a good price, he’s a great buy candidate. He should see his fantasy value increase in 2020, driven by personal growth, team growth, and an increase in Touchdowns. If you believe in the talent of Kyler Murray, then you have to buy into Kirk’s future with him.

Anthony Miller’s second year in Chicago was frustrating to owners. It started slow, but had the peaks that point to a potential third year breakout.

While Trubisky seemed to struggle in year two, he still targeted Anthony Miller. Recognizing an increase of 30 targets, and 19 receptions show the quarterback’s faith is growing. This 57% increase did not lead to more red-zone targets for the second-year receiver. Miller actually saw one less red zone target in 2019 compared to 2018. His red-zone efficiency also dropped, as his 5 red zone touchdowns in 2018 exceeded his 2 total touchdowns in 2019.

I opine the 7 touchdown season is a better reflection of Miller’s capabilities. In his last two years at Memphis, Miller piled up 33 total touchdowns. This is an opportunity for Miller’s fantasy value to skyrocket in 2020. Chicago’s 20 passing touchdowns were 26th in the NFL, and it feels like it can’t get much worse. If it gets better, Miller will be a major beneficiary.

Trey Burton is still on the roster in Chicago, and it doesn’t save the Bears much money to cut him. Even so, that middle pace is appetizing. Although it’s not a 1,000-yard season, Miller has shown his touchdown upside in 2018. If we match the 7 touchdowns from 2018, and his 2019 pace without Gabriel, Miller would have 214 PPR points. A wide receiver with this total would have finished as WR22 in 2019.

These numbers don’t account for any personal growth from Miller, which he’s surely capable of. Even if he doesn’t get quite as many touchdowns, he could see an increase in yards if Trubisky improves. The Bears invested a second-round pick in Miller, and they should continue to utilize him. If he can overcome his shoulder injuries, Miller has a bright future in Chicago.

It’s been reported that the Bears will be pursuing Austin Hooper this off-season. If the Bears manage to land the young tight end, Matt Nagy could try to utilize him as he utilized Travis Kelce in Kansas City. This would be trouble for Miller, but it’s the only big threat to him this off-season. Chicago doesn’t have a first, or third-round pick in the 2020 NFL Draft. They have needs in the secondary, as well as the offensive line that could be addressed in round two. They also received a fourth-round compensatory pick that could be used to take a third wide receiver.

Takeaway on Miller – He likely won’t be the number 1 in Chicago as long as Allen Robinson is there. Did I mention Robinson’s a free agent in 2021? Anyway, a great season from Miller would put him near WR20, but a top 30 season is a reasonable expectation for Miller in 2020.

Draft Profile: Tee Higgins
Houston We Have a Problem: Nuk Heads to the Desert