Don’t sleep on the ACC! There are plenty of great devy players. Lets look at some you should focus on this season. 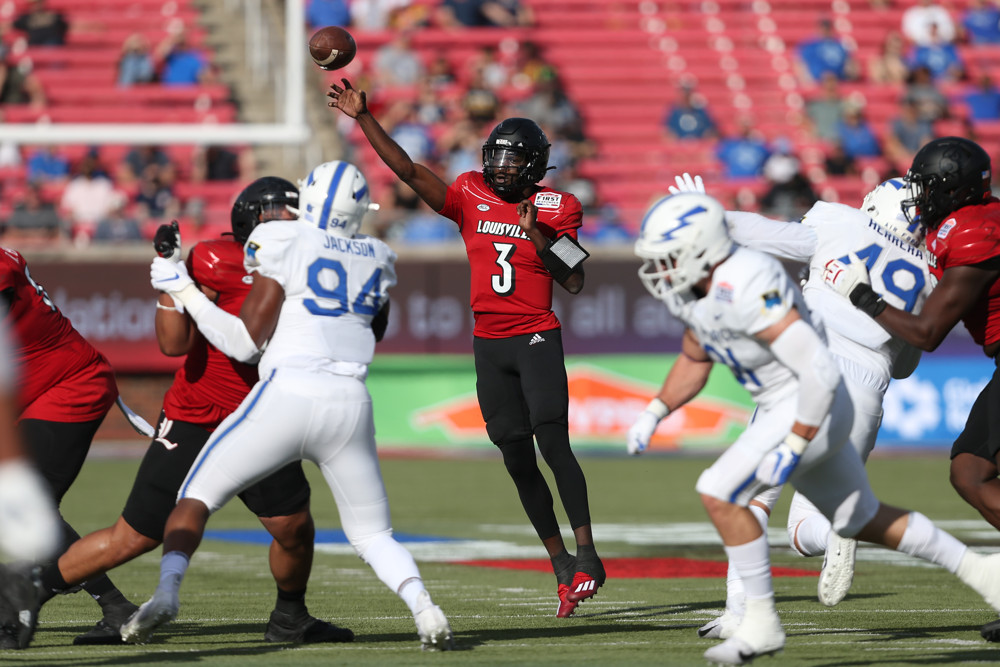 Pittsburgh is coming off a magical season where they won the ACC championship but have significant holes to fill. Clemson looks to rebound from last year and hopes to have an improved passing game. North Carolina brings in a new quarterback but has tons of weapons at their disposal. Louisville looks to rise to the top with a dynamic quarterback and a loaded backfield. Miami has a new coach and will look to get back to its glory days. Schools like Boston College, NC State, and Syracuse have high-end Devy prospects. Many look down at the ACC, but there is plenty of talent across the conference to keep your eyes on this season.

Tucker, in two seasons, has put up impressive numbers with over 2,000 yards and 18 total touchdowns. Even more impressive, he is doing this with little help and defenses knowing to key on him. He is not as flashy a name as many in the 2023 class, but he averages over six yards a touch and produces. Tucker could help move into the second round of the 2023 NFL Draft with another big year.

Last season Malik Willis rose draft boards because of his high ceiling and electric playmaking ability. This year we have another Malik in Malik Cunningham, who was very impressive last year.  Cunningham had a career-high in rushing yards in 2021 with 1,031 and showed improvement as a passer. He shows just as much upside but against better competition than Willis. If Cunningham can improve on accuracy and limit mistakes, he could be a candidate for the QB3 of the 2023 class.

North Carolina did not meet expectations last year, but Downs more than exceeded what any Tar Heel fan could have hoped for. He was the only consistent weapon for Sam Howell. Downs finished with 101 catches, 1,335 yards, and eight touchdowns, which is a massive jump from only seven catches in his freshman season. He will look to put up similar numbers again this year with a new QB. If he can succeed again, he could be a top-five WR in the talented 2023 class.

Clemson’s offense last year struggled, but Shipley was a bright spot. He amassed 855 total yards and 11 touchdowns in just ten games. He proved that he could be the lead back and not just a slasher. Shipley only had 16 catches last year, but I think his involvement in the passing game will only increase. I look for Clemson to lean on him and prove to be the second RB in the 2024 class.

Many casual football fans do not know Abanikanda, but he was a big reason Pittsburgh was also successful in 2021. Pittsburgh used an RB rotation, but Abanikanda still had over 800 yards and eight touchdowns. He is a good receiver and tough between the tackles. Losing Kenny Pickett is likely to be a heavier running game, so I hope Abanikanda gets more touches and can continue improving his draft stock.

Many expected big things from Flowers last year because of his outstanding season in 2020. In 2021, he ended up with 746 yards and five touchdowns, but much of that was missing his starting QB through parts of the year. I thought he would still declare last year, but he comes back to team up with Phil Jurkovec in 2022. I could see Flowers having a similar rise that Chris Olave had this year as a fourth-year player.

Leary is not a name that many probably know, but he could have the next rise like Pickett. The only difference is Leary will have multiple years of high-level production. He had dealt with injuries, but in 2021 he passed for over 3,400 yards with 35 touchdowns to only five interceptions. NC State has a chance to make noise in the conference, depending on Leary continuing his great play. He is a sleeper that could jump up draft boards in 2023.

North Carolina has had some standout RBs in recent memory, and Pettaway could be the next. There is a crowded backfield with no obvious number one for the Tar Heels. The one good thing for Pettaway is his ability as a receiver, so he may have an easier time gaining a clear-cut role in 2021.  He could be utilized similarly to Michael Carter a couple of years ago. With the NFL moving to more split backfields, Pettaway is a player to watch for.

Citizen was a top 100 recruit, and a big get for new coach Mario Cristobal. There is a group of backs that Miami will use, so I am not sure how much Citizen will play this year. In my opinion, he is the most talented of the backs and the one you want for the future. Cristobal and new OC Josh Gattis emphasize the run, so he should be very involved in the offense in years to come.

Clemson brought in two dynamic freshman receivers, but Adam Randall suffered an ACL injury that will most likely keep him out for 2022. That opens a great opportunity for Williams, a top six WR in the 2022 class per 247 Sports. Clemson receivers struggled with gaining separation, so Williams will be looked upon to open up the offense and help the passing game. We have seen Clemson receivers be very successful in the NFL, so Williams is one to watch out for.

Klubnik was a very highly rated prospect coming out, and Dabo Swinney has said that he is ahead of schedule. Last year D.J. Uiagalelei did not meet expectations and struggled for much of the season. We will see if he progresses, but the Spring Game showed minimal improvement. If he continues to struggle, Klubnik could get the nod and might not give the job back.

Mumpfield had an outstanding freshman season at Akron with 63 receptions for 751 yards and eight touchdowns. With that success, he transferred to Pittsburgh to team up with Jordan Addison. The only problem is Addison left for USC, so now Mumpfield will be the focal point. We will see if he can show as much success at a higher level of competition.

After three years at Central Arkansas, Hudson has decided to move on to a bigger challenge. He has over 3,000 yards and 27 touchdowns in his career. He plays with the exciting Cunningham, who is already listed earlier. In the spring game, they were already connecting with Hudson pulling in a couple of deep targets. With a good year in the ACC, Hudson could help his stock to a possible Day 2 selection in the NFL Draft.