The 2022 draft eligible wide receiver class appears to have an impressive mix of top-end talent and depth. @FF_Hulsey is here to make sure you take a level-headed approach to your rookie preparation so you do not miss out on the next superstar. 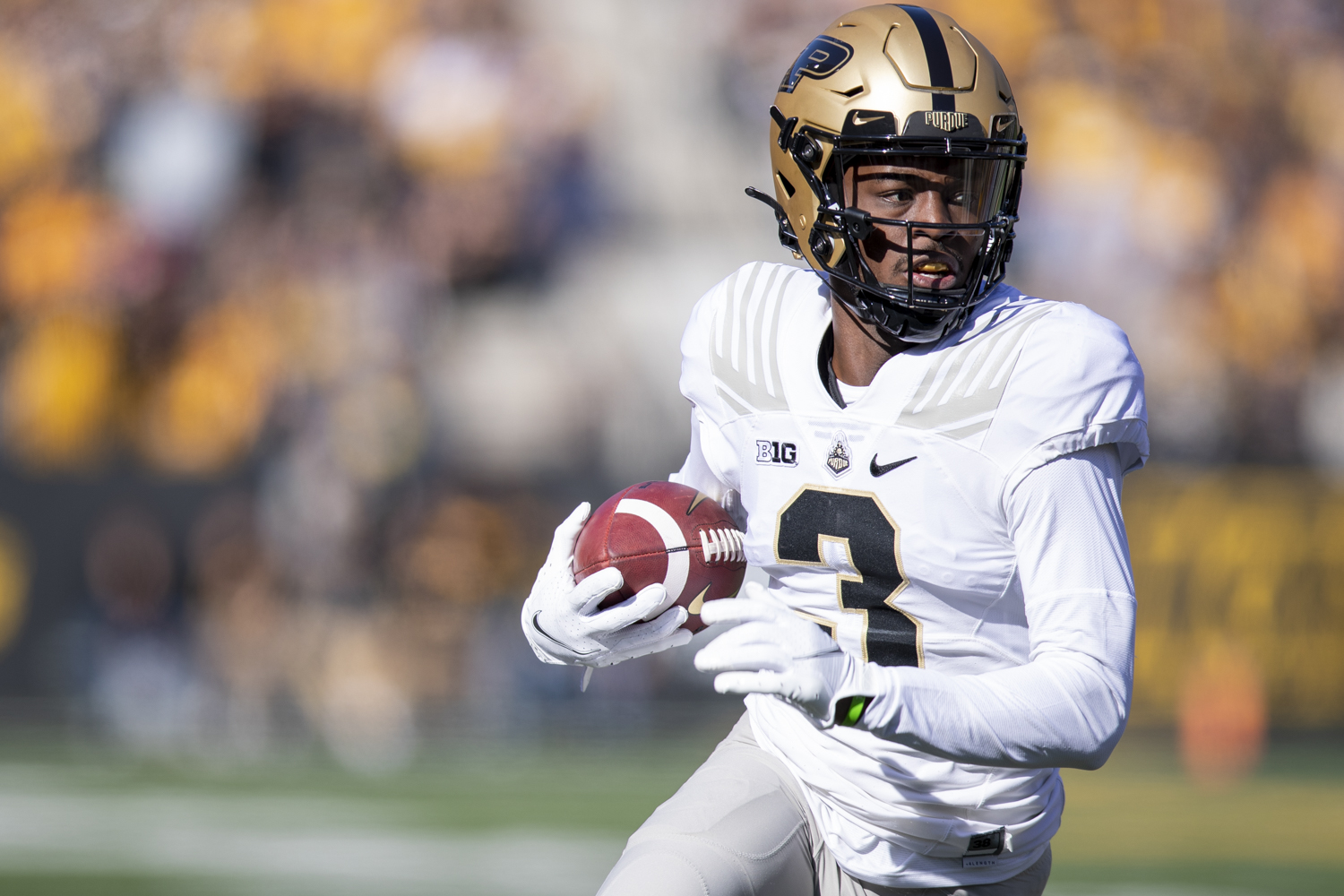 I have long argued that the 2022 draft class is stronger than the dynasty community originally thought, and the wide receiver position is why. Elite rookie and second-year receivers have flooded the league with premier playmakers. This group appears to have an impressive mix of top-end talent and depth as well. Overreacting to draft classes has become a cyclical fantasy tradition unlike any other. We are here to make sure you take a level-headed approach to your rookie preparation, so you do not miss out on the next superstar talent. Take a hard look at the strongest position of this class before you consider fading those 2022 picks.

In a class full of wide receivers with elite athleticism, Burks stands alone as the outlier. Receivers with Burks’ size simply do not move the way he does. He has the frame of a traditional prototype at the position with enough speed to be an instant mismatch for defenses. I expect Burks to be a sub-4.5 40 runner at the NFL Combine, which would send shockwaves throughout the draft community but is well within his range.

He has spent the 2021 season embarrassing SEC defenses while creating highlight-reel catches that make Twitter explode. Burks has been the centerpiece of an improved Arkansas offense with a 44% dominator rating. His body control and jump ball ability are a sight to behold. With great size, blazing speed, and excellent ball skills, Burks has distanced himself in the WR1 conversation.

Treylon Burks is THAT dude 🔥 pic.twitter.com/KrryL2K79Q

The first of two top Buckeye receiver prospects in this class, Wilson is unmatched off the line and is a monster after the catch. He is the best route runner in the class and routinely shows off the ability to explode through his route and create separation. As perhaps the most refined receiver in this group, Wilson has a very high floor and will be a safe pick early in your rookie drafts.

Wilson’s versatility allows him to be used in the slot or out wide. He adjusts to the ball incredibly well, plays much bigger than his frame, and has great hands. Wilson is a lock to be selected in the first round of the draft and will be an alpha receiver at the next level.

London’s season is over due to a fractured ankle, but the injury is not as serious as initially feared. Thankfully, it should have very little impact on his draft stock. London was having the best season of any wide receiver in the country, leading the nation in yards, contested catches, and forced missed tackles by a receiver. He is a lengthy wideout who works well vertically and is nearly unguardable in single coverage. There is no such thing as a 50/50 ball because London excels at the catch point.

I usually take statistical production with a grain of salt at the receiver position, but I can not ignore London’s dominance. He totaled 1,084 receiving yards and seven touchdowns in just eight games this season. Preliminary indications are that London will be good to go for pre-draft testing and could emerge as a huge winner at the NFL Combine if he tests well.

I wish I could justify ranking him higher because Bell will undoubtedly be one of “my guys” in the 2022 class. He’s another receiver with good size and impressive acceleration, reaching 20.1 mph in just 4.4 seconds in a huge 11-240-1 performance against Iowa. He excels in tight coverage and is a contested-catch machine. He is a very physical receiver with an advanced skillset and exceptional body control (see below).

Bell has been under the radar for far too long due to playing alongside Rondale Moore and in the same conference as Ohio State’s stud receiving corps. He is a technician at receiver and is making the most of his opportunity as the featured playmaker in Purdue’s offense.

This is the start of tier two for me. Olave is my WR5 and likely the biggest faller over the past year. He should be playing on Sundays right now but decided to return to school, and his draft stock has taken a hit as a result. He is a smooth, effortless route runner but does not have eye-popping physical traits like others do in this range. Despite the draft community’s well-documented concerns, I still think he gets Day 1 draft capital and goes ahead of some community favorites.

Olave has elite separation at the intermediate-deep levels of the field and may have the best hands in the class. It also helps that a sub-4.4 40 time is within his range. My biggest issue with Olave is that he is not an early-declare, which means the odds are overwhelmingly against him to hit as a WR2 or better. He will be the most debated receiver prospect between now and the start of the 2022 season. If the landing spot is in his favor, I still like Olave to make some noise as a pro.

The case for Pickens is an interesting one. As a true freshman in 2019, he was one of the highest-graded receivers in the country and did not record a single drop in 77 targets. Surface production dipped in 2020, in large part due to questionable quarterback play, but certain key metrics looked much better. His contested catch rate more than doubled from his freshman to sophomore seasons.

Pickens’ 2021 season has been plagued by an ACL tear he suffered in March, but he should see some action down the stretch. It would be encouraging to see him produce at a high level ahead of draft season but if he does not, Pickens may be the ultimate steal in your rookie drafts. A portion of the community has moved on to some of the more recent shiny new toys at the position. When healthy, Pickens is a physical force with a massive catch radius who can overwhelm a defense with his size.

I am all in on Jameson Williams being the better Alabama wide receiver prospect. He is an extremely well-rounded receiver with elite top-end speed. He leads the SEC in yards after the catch and can score from anywhere on the field. Williams is the more complete and versatile ‘Bama receiver, and I am very confident that he will be selected before Metchie in April, assuming he declares.

Williams is the better route runner, more explosive with the ball in his hands, and is doing all this in his first six months with the program. Not to mention, he is a game-changer on special teams, which should get him on the field fast. Kiper has him at WR2 in his latest rankings, which seems a little spicy even to me. Still, he has settled in as my WR6 with a path to move up. I encourage everyone to check out his tape in the Dynasty Nerds Prospect Film Room because he is a joy to study.

First off, let me address the elephant in the room. Kentucky listing Robinson at 5’11” reminds me of when I convinced my now-wife that I was 6’3″. It worked for me, but nobody is buying it in Robinson’s case. Robinson’s verified height at the All-American Bowl less than two years ago was 5’8¼”. Luckily for him, the NFL has evolved, and the prototypical size of a wide receiver is much different than it used to be. Rondale Moore’s early success with Arizona should be encouraging for Robinson truthers.

While size will always be a question with Robinson, he is a dynamic gadget receiver and very instinctive with the ball. He is an instant mismatch for defenses with his shiftiness and ability to separate with ease at the deeper levels. Robinson’s game logs this season tell an interesting story. He went 18-337-2 in the first three weeks of the season against Louisiana-Monroe, Missouri, and Chattanooga. Since then, against better SEC defenses, he has totaled 40-308-3 in five games. He has a great analytical profile, but this is something worth noting.

This is lower than most are used to seeing Dotson ranked, but it is more of a compliment to the class than an insult to Dotson. He came on strong in 2020 and has mostly backed it up with a productive senior season. He is an older prospect and struggles with separation at times, but the ball skills are strong. His ability to win at the catch point is especially impressive.

Dotson has certainly been affected by less-than-ideal quarterback play by Sean Clifford, whose struggles with accuracy and consistency have continued into the 2021 season. Dotson has impressed me despite that, though. He is a great pass catcher with elite speed and awareness.

Another one of “my guys” in this class will be Doubs. Sure, he benefits from Carson Strong throwing him the ball in a pass-heavy offense but what I like about him goes beyond that. He has a rare combination of size and speed, elite separation skills, and great hands. He knows how to use his body to gain position on defenders and displays a natural feel for the position. Down the stretch, he needs to do exactly what we expect a receiver to do in the Mountain West; dominate lesser competition.

Doubs has been getting by on athleticism alone for much of his collegiate career. Now we are starting to see him refine his skillset. He should get Day 2 draft capital, especially if he puts together a strong Senior Bowl and Combine.

#Nevada WR Romeo Doubs is starting to put it all together and round out his game. Still works extremely well on a vertical plane but the nuance of the position is becoming second nature.

I am ready to accept any heat that I catch from this. Make no mistake. There is plenty to like about Metchie’s profile. He has the speed to be a difference-maker, has been a YAC monster this season, and comes from the NFL’s premier pipeline program. The analytical profile is a concern, and I question whether he can develop into a complete receiver.

With the emergence of Jameson Williams, Metchie has failed to become the featured playmaker in Tuscaloosa and does not command a huge target share in the offense. I have a hard time believing that Metchie is going to be a high-impact receiver in the NFL, but I can see him hanging around for a long time as a WR2-3 type.

Draft capital will be massively important for Tolbert. If he is selected early, watch out because his stock will go to the moon. Tolbert has all the tools needed to be an early-round selection, but the NFL has not always been kind to big-bodied small school receivers.

Tolbert is a gifted off-target receiver and routinely hauls in passes that are not even in the same zip code. He certainly has the size and moves effortlessly on the field. I do not expect him to test particularly well but pave the way to first-round draft capital if he does. There is a high degree of risk with Tolbert, but the potential is significant.