One of the top QBs in the 2022 NFL Draft, Matt Corral is mobile passer whose draft stock rose with a good 2021 season. 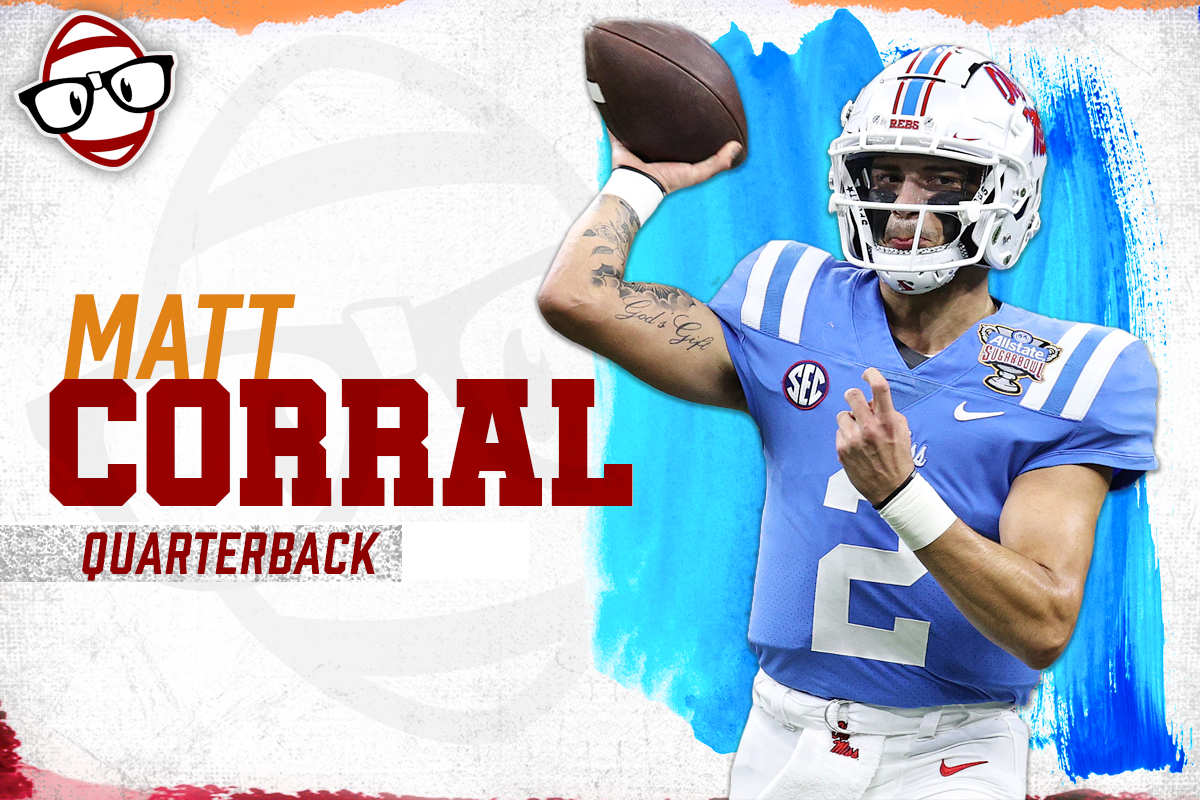 The 2022 NFL Draft class at quarterback is regarded as a less than impressive class. It lacks superstar names, surefire prospects like Trevor Lawrence, Kyler Murray, not even a Jared Goff or Carson Wentz. Many pundits are not projecting a QB until the pick seven to ten range. QBs have dominated the top ten in recent years, but we may only see one go in the top ten of the 2022 class. Matt Corral will be one of the first, if not the first, QB taken.

As a full-time starter in 2020, Corral’s name started to gain some traction in scouting circles. He threw for over 3.300 yards and 29 scores but gave away 14 interceptions. Most of those were in two games, but they demonstrated a recklessness that needed to be cleaned up. Flashes of how good he could be were there, but an implosion always seemed on the horizon.

2021 was a different story. Corral reigned it in and again threw for over 3.300 yards but with only 20 scores and just four INTs. He ran for over 500 yards and scored another 11 times on the ground. The Ole Miss receiver corps was decimated by injury, and he often carried the team solely on his arm and legs.

The big test was against Alabama, Ole Miss lost, and Corral was 21 of 29 for only 213 yards and a score. It wasn’t an excellent game for Corral, but it was a testament to his growth. He took what the defense gave him and didn’t force errors.

It was good to see him clean up errors, and Corral’s ability to create with his legs makes him incredibly dangerous. He flings the ball effortlessly downfield, and he is a gunslinger – live or die by the gun. Corral has a lot to love and will undoubtedly take some coaching in the NFL, but the ceiling is really high.

Corral has a bazooka for an arm and isn’t afraid to use it. He can get the ball downfield quickly and hit any throw at any level. Corral throws with anticipation and leads his receivers. He has a quick release and works the middle of the field better than any QB in the class.

This throw shows how well he worked in the middle of the field. Corral sets his feet and zips the ball into a spot where only the receiver can get it. The receiver worked to an open spot in the zone, and Corral quickly popped it on a rope. The ball has some velocity, and the release is quick and clean.

This is one of my favorite throws I saw in dissecting Corral’s film. I love the pump fake and then the ball placement on the receiver’s outside shoulder and in stride. It’s a perfect throw – a beautiful ball from Corral.

The receiver has good separation on this deep route, and Corral sets his feet, firing the ball almost 60 yards in the air to hit the WR. A little more oomph, and it wouldn’t have been caught falling to the ground. It was still deep enough where only the receiver could get it and showcased the arm.

As a runner, Corral is dangerous and quick. He makes defenders miss with jukes, head fakes, and isn’t afraid to lower his shoulder to get a few more yards. Many QBs can run when they break free of a pocket and have green grass ahead of them. Corral works through traffic and finds the green grass himself.

On the QB draw, Corral finds the hole and gets to the second level in a hurry. He weaves through traffic, and as he’s falling, Corral can extend and nearly score. I love his grit and determination when he is a ball carrier.

The pocket collapses, and Corral takes off. The moves I spoke of are on display in the second level. He uses footwork to gain a good angle and fakes out a defender before getting cleaned up, not before getting the huge gain.

What makes Corral so good could end up being his downfall in the NFL. He can make any throw and often thinks he can, forcing passes he shouldn’t. Corral is a gunslinger. This year, he cleaned it up, reducing INTs from fourteen in 2020 to only five in 2021. Yet, he still takes a lot of risks, and it could end up costing him at the next level.

The rushing will likely need to be curtailed for him to succeed. Corral has fought injuries, playing through pain nearly the entire season. He takes a lot of hits with his running style, and he will need to take more slides than tackles. Corral is 6’1” and 205 pounds, not built to take a hit like Cam Newton.

The Ole Miss offense is tailored to get receivers in space and timing. Corral wasn’t asked to read defenses as much, not necessarily uncommon with college QBs. He used his progressions but didn’t often spend much time getting to his third or fourth read. Usually, if the first or second wasn’t open, Corral was on the move. I think he is capable of running a more advanced offense, but something we will need to see.

Corral is my QB1, and I believe he has the highest upside in the class. With the high ceiling, though, there is also a lower floor. I don’t believe he is as “safe” as Sam Howell but not as risky as Malik Willis or even Kenny Pickett.

A team with a one-year stopgap QB would be the best landing spot for Corral. I believe that is true for any rookie QB, though. I would like to see him land somewhere with a plan to develop him and an offense with pieces for Corral to evolve with.

QB-needy teams in the first round include Carolina, Washington, Denver, and New Orleans. The Giants have two picks in the top ten and could move on from Daniel Jones. I like New York because of the weapons they have, but I don’t trust the franchise to develop Corral and keep improving the team. Denver is intriguing; they have a loaded offense and a strong defense – a QB could be addressed.

I’m firmly in the camp as a Corral believer, and I think he will be the best QB in the class when all is said and done. He will be valuable in the NFL with his mobility and arm, but reading NFL defenses and reigning in the “wild horse” in his game (sorry, I’ve been watching Yellowstone a lot) will be critical to his success.