Brandon Smith may be a starting NFL linebacker one day. However, his tape shows that day likely never comes. 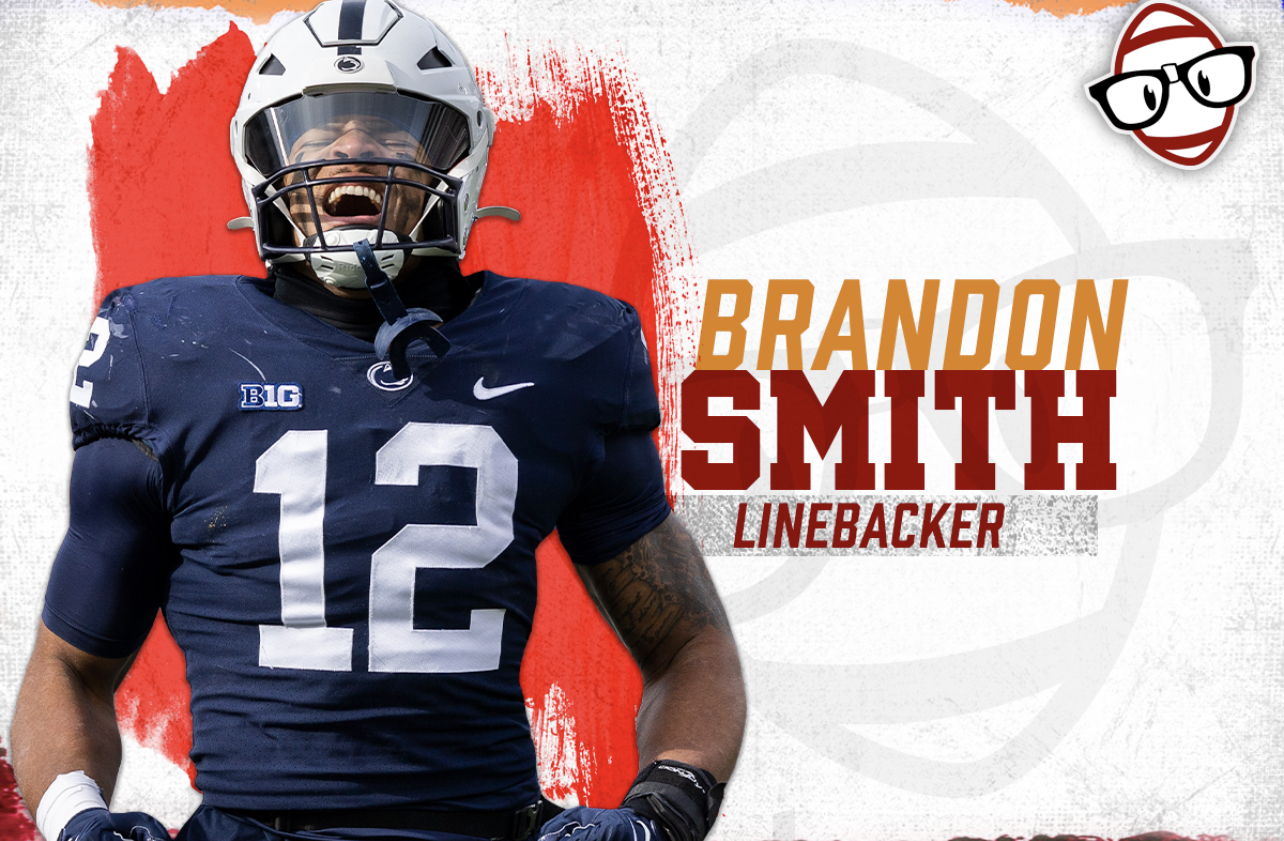 Brandon Smith is very athletic for an inside linebacker candidate. However, he doesn’t always use his natural gifts well, and you find yourself looking for him on tape, not him standing out. It’s likely going to take some time before Smith can be counted on as a regular contributor.

The ceiling on Smith may be as a rotational LB versus an every-down starter. You get that “just a guy” feeling with Smith. If he played for a smaller program, would he be considered as much more than a late Day 3 draft selection?

Brandon Smith was a four-star recruit from Louisa County High School in Mineral, VA. He was recruited by Clemson, Alabama, Penn State, and others, ultimately choosing Penn State. In the 2019 recruitment class, he was the state of Virginia’s #1 ranked linebacker.

Smith didn’t have much production during his first two seasons at Penn State. During the 2021 collegiate season, he had a breakout season for the Nittany Lions. He totaled 81 tackles, nine of which resulted in a loss on the play. Smith also defended five passes and forced a fumble during the season.

He will need to work to build off his junior season at the NFL level. There were some positive things that I saw on film while scouting him. However, I came away with many concerns, which I will discuss later. Those concerns will probably push Smith’s draft stock to late Day 2 or early Day 3.

Smith has a decent amount of athleticism for his size. The Illinois running back makes a critical mistake here. Even if the play call was for him to go to the flat, he should have tried to chip Smith here. Unfortunately, for the offense, he didn’t, and Smith laid a huge hot on his quarterback, causing the turnover.

ILBs in the NFL, especially those in a 3-4 defense as Smith will likely find himself in, have to be able to take on pulling linemen. Too often, he gets stuck on a block and gets tossed out of the club.

When you watch Smith on defense, rarely is he initiating contact. That is not something you want to see from an LB. Especially a MLB, they have to take on centers and guards. Often, they have to deal with a full back; also, it’s hit or be hit in the middle of the defense. Smith will be on the receiving end if he doesn’t undergo an attitude change.

Smith often looks like a matador waving the flag at a charging bull. It will take time for him to root out that tendency in his game. Offensive players in the NFL are too big to be brought down regularly with an arm tackle attempt. Smith won’t be given a lot of burn on defense until that issue is corrected.

Smith’s likely ceiling in the NFL is as a special teams ace, and most fantasy leagues don’t award points for special teams tackles. He would be lucky to carve out a role as a rotational backup with what he shows on tape. There isn’t enough to his game for Smith to be a worthy dynasty draft pick. I like to build a spreadsheet and put free-agent players into tiers of interest. Unlike other league-mates, I can be prepared in case of injury, decreasing point production, or the player being benched by their NFL team. Smith will find himself at the very bottom of an IDP spreadsheet for me.

There isn’t a lot of appeal here. Smith does do some good things, but the negatives outweigh the positives. The ceiling with him is pretty low as far as a future starter in the NFL. The weaknesses in his game will not do him any favors with his position coach. Even in deep bench leagues, there just arent enough available bench spots to roster a likely special teams ace. Smith certainly won’t come to your mind if you’re looking for a reserve option in IDP leagues. He shouldn’t even be rostered as depth. Just leave him on the waiver wire.