Damone Clark has big time NFL potential. He should not have to wait long to hear his name called in the third round of the NFL Draft. 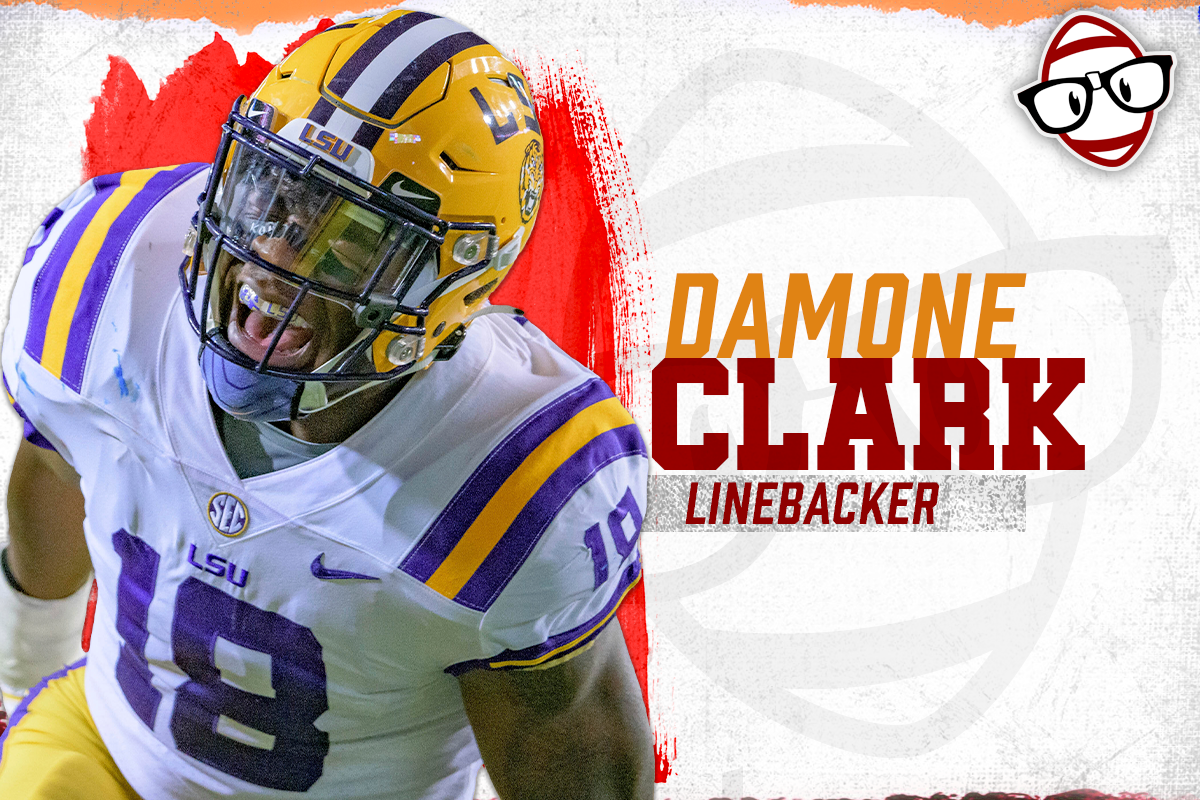 The LSU Tigers have fallen on hard times. They had some moments, but the team fell off, whether it was talent or coaching. Damone Clark was a Butkus Award finalist and led the SEC in tackles. There is some Lawrence Timmons in Damone Clark’s game; you have to love that potential for an IDP Rookie.

Clark will probably be better in the NFL, flowing to the football vs. playing off in coverage. He should be able to get coached up and improve in coverage. Right now, he seems to look lost dropping into zones. However, he’s got some decent athleticism to him so that he won’t be strictly a two-down thumper.

Damone Clark was a 4 – star recruit from Southern University Lab School. He was the #20 inside linebacker and the #13 recruit out of Louisiana in the 2018 recruitment class. His final choice was between Texas and LSU, with Damone Clark ultimately picking LSU.

Clark didn’t manage to get on the field as a freshman, which isn’t to be unexpected. He managed to get significant playing time as a sophomore. During the 2019 season, he started to come on as a player. He played behind Patrick Queen, whose currently making plays for the Baltimore Ravens.

Before the 2020 season, he was given the #18 jersey for the Tigers. In the LSU program, that number is similar to captaincy. The LSU team and coaching staff thought enough of Clark to honor him. The 2021 season was when he threw his coming-out party. Clark made 15 tackles for loss. While he’s not the best inside linebacker in this draft class, Clark might be the most athletic from a talent standpoint.

Blitzing – Clark can be a good blitzer at the NFL level. Not sure what the mix-up in the protection here was to allow a blitzer to come free.

The quarterback makes a play on pure athleticism to avoid a significant loss on a sack or coughing up the ball. Clark will get coached up on his blitzing technique, as you need to continue the pursuit; he certainly affected the play. However, a quarterback with more elusiveness may have turned this broken play into a huge gain.

Coverage – Clark takes a wide receiver deep down the field and makes the interception on this play. It should be noted the 2021 Florida Gators receivers as a group was probably among the slowest in the SEC conference.

If Clark is drafted to a team, for example, the Pittsburgh Steelers, who ask their inside linebackers to cover wide receivers at times. Having experience doing that will prove invaluable to teams who employ zone defensive concepts such as Pittsburgh.

Arm Tackling – Too often, when watching Clark on film, he chucks his arm out there when attempting a tackle. Sometimes you can get away with that even at the NFL level. But, players like Nick Chubb, Joe Mixon, Christian McCaffrey are not going down with an arm tackle. The poor tackle attempt results in a nice gain for the offense.

Hot/Cold Motor – Clark needs to finish plays. That’s something that he will have to focus on in camp. Don’t stop until you hear a whistle, don’t let up. There has to be the same sense of urgency in the first quarter as in the fourth quarter.

Clark could immediately see playing time as an NFL Rookie. That alone would boost his IDP rookie fantasy draft stock. Landing in a situation like the Pittsburgh Steelers, where neither starter at the inside LB position from the 2021 season is guaranteed to be on the 2022 53-man roster. As that would present the clearest path to playing time. To me, that would push his dynasty stock up to the backend of the second round. That would be the best-case scenario for him.

There’s a good possibility the team will have a high interest in Clark in round three should he be on the board when it’s time for their selection. Clark has the potential to be an 8-10 tackle starter for an NFL team. I fully endorse pulling the trigger on selecting him in the middle of the third round in a rookie draft.

Clark will impress NFL teams during the 2022 NFL Draft Process when they ask him to break down plays on a dry erase board. I watched a video of him explaining some of the things the LSU Tigers like to do on defense. It is a pretty thorough and very intelligent explanation. There is a bright future in the NFL for the young man. Clark is a natural leader on the field, and he shows a lot of the natural athleticism that Timmons showed on the field.