George Karlaftis, nicknamed “The Greek Freak” (sorry Giannis) is an elite pass rusher out of Purdue. @IDP_Baumer highlights what makes the him worthy of his nickname, and worthy of a spot on your rosters! 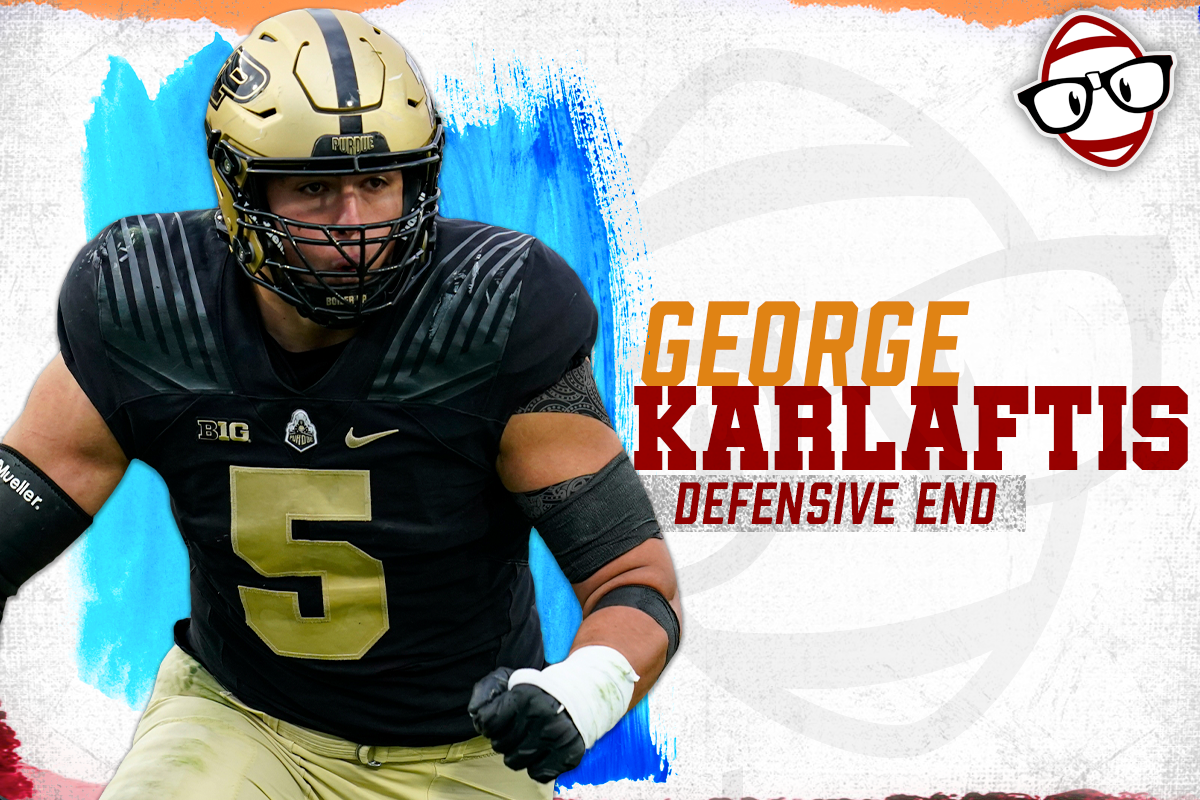 Karlaftis is one of those incoming rookies who will be drafted in the top 15 because there’s a need for top-tier pass rushers on many teams near the top of the draft. However, his draft prospects have fallen recently, and he may fall to the end of the first round. There’s a lot to debate here with him. There is a lot to love and some things that might give you pause when considering him for your rosters. Let’s take a look at his profile!

Karlaftis was a 4-star recruit and attended West Lafayette High School in Indiana. He received offers from Florida, USC, and Clemson but ultimately decided to stay home to attend Purdue University.

His freshman year (2019) was his most productive, where he registered 7.5 sacks and a good chunk of other impact plays. 2020 was shortened with a leg injury, and this past season saw his numbers take a dip. He only racked up 4.5 sacks in 2021. Some advanced metrics indicate his potential has not been fully realized in the stat block.

At 6’4″ and 275 pounds, Karlaftis has the size and physicality to compete with NFL competition. He is solid in the run game and can be a disruptor in the backfield. Karlaftis excels at countering blocks and making several rush attempts on a single play. He doesn’t tend to give up, which NFL head coaches will look at.

In this play, Karlaftis essentially carries the tackle through a block and runs him into the QB for a sack.

Here we see him coming off of the weak side and staying with the rush, and then having the wherewithal to use his hands to strip the ball.

Here we see Karlaftis stay focused on the running back to prevent a missed tackle and make a huge play in the backfield. He uses his Football IQ to keep the ball carrier from eluding him.

I mentioned earlier that Karlaftis is a persistent rusher, but he also has the instinct to realize when he should stop his rush to contain a mobile QB. In this play, he’s able to pull away from his blockers to pursue the QB, who is about to break containment for a significant gain. Karlaftis stops him here for a loss/no gain. This is probably the skill Karlaftis many coaches will want to highlight. He’ll need to be able to chase current QBs down from behind if the pocket collapses and the opposing QB breaks containment.

The main complaint I see about Karlaftis is his speed with his feet. He has a strong upper body and is quick with his hands but can get caught with cement shoes when faced with a more elusive opponent. This may be the cause for him slipping to later in the first round. NFL teams need DEs to be quick enough to keep backs from getting to the edge in the run game.

I am on the fence about Karlaftis as a viable IDP producer. I believe he will have an excellent career, but I’m concerned that he will end up being a DE in a “3-4” scheme. While several players in those roles are essential to their team’s success, that position usually doesn’t translate into fantasy production. Think of players like Derek Wolfe and Dre’Mont Jones. They’re decent players and make an impact on the field, but they can’t be relied on for consistent fantasy numbers.

I think any team in the league would love to have him on their team, but be cautious drafting him to your fantasy team. Unless you can afford to have him on your taxi squad for a year or two. I wouldn’t look to draft him until the middle of the third round in rookie drafts.

Thanks for reading! Let me know your thoughts in the comments, or hit me up on Twitter @IDP_Baumer!