Dwight Peebles highlights why the former Oregon EDGE rusher should be the number one overall pick – could Thibodeaux be your IDP number one also? 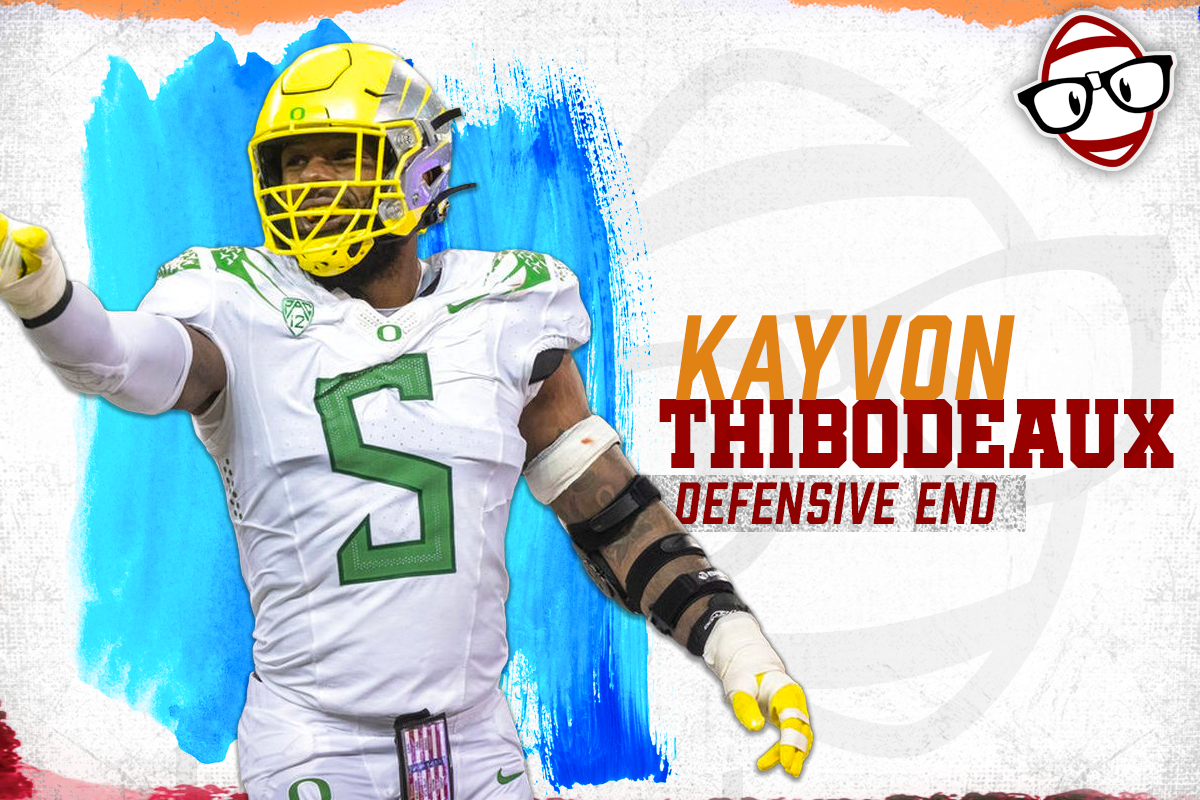 Since he entered college as the second-ranked overall recruit, Kayvon Thibodeaux has been destined to be the first overall pick in the NFL Draft. He has not disappointed, and it seems likely that the Jacksonville Jaguars will be selecting the monstrous pass-rusher from Oregon with the first pick in the 2022 NFL Draft.

Thibodeaux received 27 offers and took official visits to Alabama, Florida, and Florida State before ultimately committing to the University of Oregon. As a freshman, he immediately hit the field and made a splash for the Ducks.

That freshman year of 2019, Thibodeaux tallied 35 tackles, including 14 for a loss and nine sacks. He had two sacks versus Cal and Arizona, then 2.5 against Utah in the Pac-12 title game. His impact was felt immediately, and Thibodeaux elevated the Oregon defense.

His sophomore season wasn’t nearly as productive as Oregon only played seven games, and Thibodeaux battled injury. 2021 brought about a resurgence, and he raked in 49 tackles in ten games with a dozen tackles for loss and seven sacks. He had a career game Versus UCLA – nine tackles, two tackles, and a forced fumble.

Thibodeaux was an All-American selection in 2021 and elected to enter the NFL Draft.

Can I say strength for his strength? Thibodeaux has the power to move people but his power to fight through blocks and being engaged is what impresses most. When he gets engaged, Thibodeaux still drives hard and can disrupt plays.

In this clip, fellow 2022 Draft entrant Greg Dulcich tries to slow Thibodeaux down and push him outside. The power, mixed with speed, is no match for a TE and Thibodeaux muscles around the corner to get a forced fumble.

All offensive lines need to do is throw a double team at the big hoss, right? Wrong – versus Oregon State in this clip, Thibodeaux gains the inside of the tackle and the guard tries to help, but the speed and power are too much. He shoots the inside gap and nails the poor QB for a big sack.

If it’s just speed you want, here you go, sir! Simply unfair. His timing and burst aren’t always on point, but Thibodeaux’s speed becomes straight nasty when it’s good. In this play, he beats the tackle inside and hits Jake Haener before he’s able to set his feet on a short dropback. Another fumble and huge turnover caused.

And, he’s also pretty good in run defense when he’s able to break through the line. This clip has two plays, almost back-to-back when Thibodeaux is able to cause a loss, then a turnover, by reading the play and blowing it up.

There are minor nuances Thibodeaux is also very good at. He uses his hands well and doesn’t get fully engaged often. He explodes low and with power off the line, keeping his eyes on the play while working through blockers.

His lateral agility is phenomenal, and he could test exceptionally well at the combine in many areas. Thibodeaux has the size to add muscle mass and could get stronger – scary thought.

Thibodeaux is still raw and often relies solely on speed and power. He has a solid spin move in his arsenal, but he’s limited on his move repertoire. That burst and get-up off the line can leave him in a bad position for run defense, and then his pursuit is ineffective.

Some also question his production; his numbers weren’t overwhelming for an elite pass-rushing prospect.

I mentioned it above, his jump off the snap isn’t a strength but his short-area quickness and burst when he does get off makes it a moot point.

With the first pick in the 2022 NFL Draft, the Jackson Jaguars select:

Franchise-changing players like Thibodeaux don’t come along often. With Trevor Lawrence leading the offense and Thibodeaux leading the defense, the Jags will be set to build a contending team. Both players are cornerstone types of players.

Thibodeaux is raw and will get better and stronger, with massive potential to be an impact player to change the outcome of games. Offenses will have to scheme against him. His power and speed alone make him an elite pass-rushing prospect. He has the versatility to line up standing up as an outside linebacker or with his hand in the dirt. Either way, Thibodeaux can wreak some havoc.

For fantasy, the former Oregon Duck will be one of the first few players selected. He’s going to be one of the top producers if he’s listed as a DL in your fantasy platform. Thibodeaux shouldn’t play enough as an OLB to be listed at that position – but if he does, it will greatly hurt his fantasy value.

Thibodeaux is one of the rare prospects that has been the projected number one overall pick since he entered college and really should be the number one drafted player in the draft. The Jaguars, or Lions if they pass, will be getting an exceptional defensive talent.