The top safety in the 2022 class is playmaking Kyle Hamilton. @IDP_Baumer highlights what makes the former Fighting Irish worth looking at in your 2022 Rookie Drafts! 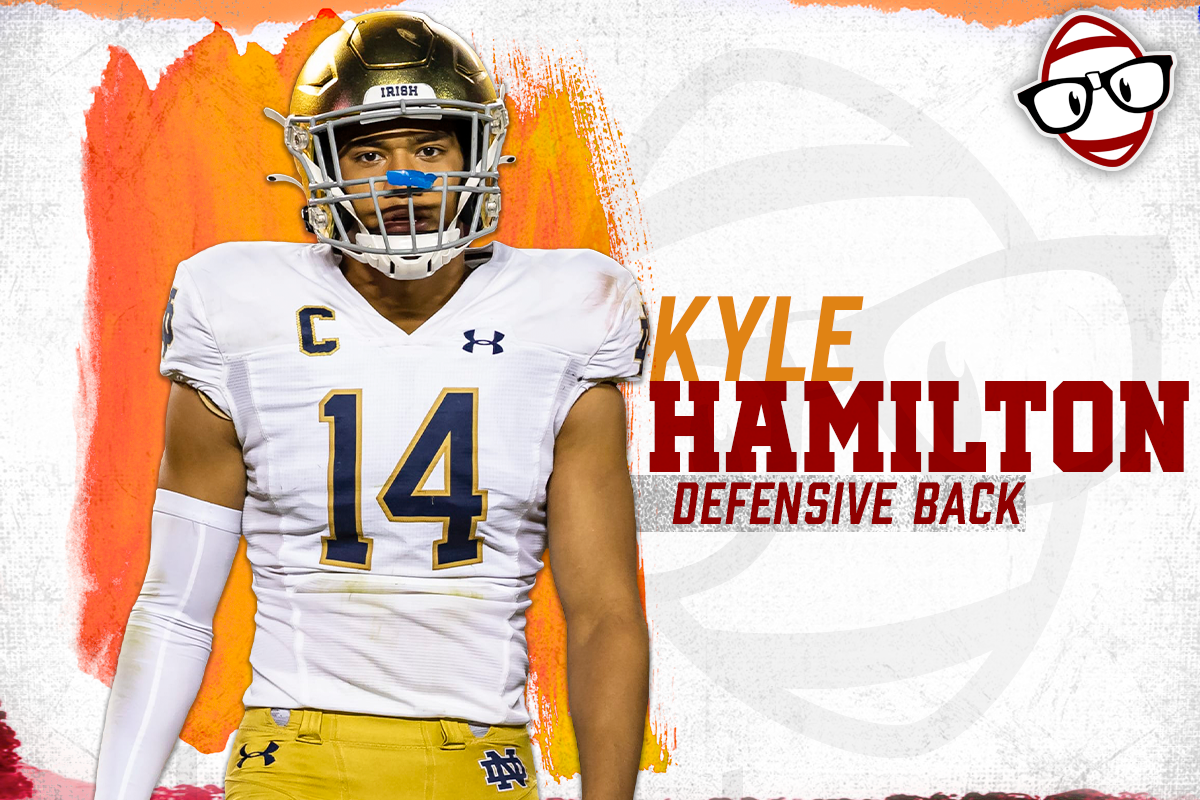 Kyle Hamilton has the potential the become this year’s Micah Parsons but at the defensive back position. His athleticism, length, and nose for the ball make him a highly sought-after player!

Hamilton was a 4-star recruit from Marist School in Atlanta, Georgia. He had received offers from Ohio State, Michigan, Georgia, and LSU, to name a few. But, Hamilton ultimately decided to take his talents to South Bend and The Fighting Irish.

Hamilton hasn’t had the flashiest college career on paper. He didn’t play much his freshman year but did manage to snag four interceptions in his limited playing time. His most impressive season came in 2020, when everything was a bit off. Hamilton racked up 63 combined tackles, four for loss, and an interception. Before the 2021 season, he was on the watch list for the Jim Thorpe Award and was cut short due to a non-structural knee injury he suffered in October.

At 6’4″ and 219 pounds, Hamilton is an imposing force on the field from the defensive backfield. He is fluid and has deceptive speed. It allows him to cover a lot of ground quickly and make disruptive plays. Let’s take a look at some of his highlight-worthy plays from college.

In this play, Hamilton starts almost nine yards off of the line of scrimmage but can still pursue the ball carrier for the tackle for loss.

This play is the perfect example of his ability to make the opposing QB think he is coming on a blitz but then fall into coverage to eliminate the receiver in the slot.

This clip may be a bit confusing at first, but if you look on the bottom right, you’ll see Hamilton come 40 yards away from the throw to make a play on the receiver.

Here’s another clip of Hamilton seemingly coming out of thin air to make a play. This time, he blitzes from the nickel corner position and finishes with a monster sack.

No player is perfect. Kyle is lacking in man coverage, especially when it comes to faster receivers. This isn’t necessarily bad considering most players of his size lack the top-end speed you’d need to cover faster players. He will probably need to increase strength at the next level, but be cautious not to lose speed.

Kyle Hamilton is a player that seems to fit a specific need that many NFL teams are looking for. A Jack-of-All-Trades player that can cover running backs, tight ends, and slot receivers. As well as having the physicality to make plays in the run game.

I’ve looked at several mock drafts, and most analysts have Hamilton being picked in the top 10. Many times to the Jets. We’ve already seen players be successful in the hybrid safety/linebacker role in New York, namely Quincy Williams. The Jets haven’t changed much on their coaching staff so that Hamilton would be used well in their current scheme.

Several other teams would jump at the opportunity to draft Hamilton, so we’ll have to evaluate his potential for immediate IDP impact when we see who drafts him. If the situation is right, I could see Hamilton being taken early in rookie drafts, possibly as early as late in the Second Round.

Thanks for reading! Let me know your thoughts in the comments, or hit me up on Twitter @IDP_Baumer !