2022 National Champ and Butkus Award winner Nakobe Dean will likely be the first linebacker drafted this April! @IDP_Baumer highlights what makes the him worth acquiring in your 2022 Rookie Drafts! 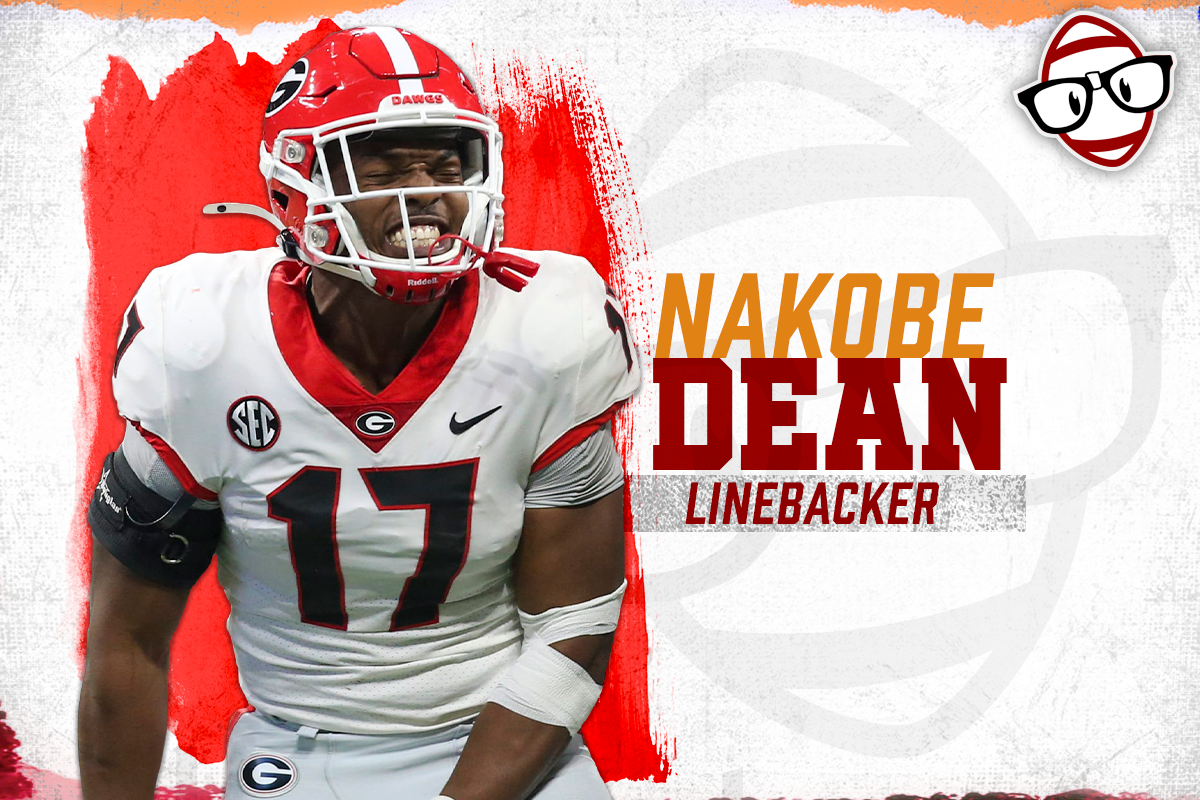 2021 National Champion and Butkus Award winner Nakobe Dean will likely be the first linebacker drafted at the end of April. He has excellent range, instincts, tackling ability, and blitzing, making Dean another linebacker with the “Swiss Army Knife” label. With the success of Micah Parsons last year, I would imagine several teams will want to put his talents to good use immediately.

Dean was a 5-star recruit out of Horn Lake High School in Mississippi. He was the #1 recruit out of Mississippi, the #2 inside linebacker, and the 19th overall player in the 2018 recruiting class. He was heavily recruited by several SEC teams, including Alabama, Ole Miss, and LSU. Dean ultimately ended up going to Georgia.

Dean spent his freshman year (2019) behind Monty Rice and Tae Crowder (both in the league and played significant downs this season) but was elevated to a starting role in 2020 next to Rice. He was the Bulldogs’ leading tackler and tallied 1.5 sacks.

This past season, Dean was second in tackles (72 combined) but was only one tackle behind leader Lewis Cine. Dean also managed to rack up six sacks, two forced fumbles, and a pair of interceptions (including a pick-six). Dean was the leader of the nation’s top-scoring defense and second in total yards allowed. His leadership and instincts were critical components of his team’s success on defense.

Dean was also awarded the 2021 Butkus Award, given to the nation’s top linebacker.

At 6’0″ and 225 pounds, Dean doesn’t have the height/length of a prototypical linebacker, but he makes up for his lack of height with strength (adding 25 pounds over his collegiate career), coverage, and instincts. Let’s take a look at some of Nakobe’s highlights that demonstrate his best traits…

In this play during the playoff semifinals, Dean sniffs out this screen from a mile away and has the speed to make the tackle behind the line of scrimmage.

This is a longer GIF, but it shows Dean’s leadership and football IQ in a very crucial moment during the National Championship game. Dean’s teammate, Channing Tindall (another linebacker who will be playing on Sundays), missed an assignment on a play that almost allowed Alabama to score if not for Dean’s ability to make up for it. Dean was visibly upset and had some passionate words with his fellow linebacker. The very next play, a crucial third down, Tindall gathered himself and was able to sack Heisman winner Bryce Young. You can see Dean afterward encouraging his teammate. That’s the kind of passion and leadership that will mean a lot in the NFL.

This play was towards the end of Georgia’s game against conference opponent Florida. The game was well in hand, and Florida attempted a long fourth-down conversion. Dean held his position in the zone coverage and read the opposing QB to dash over to knock the pass down. He almost came away with the interception.

Here’s another play where Dean drops back into coverage and jumps the route. This time he comes away with the interception and takes it to the house for six!

In a Week 1 matchup with 2020’s National Champ, Clemson and Dean had one hell of a game. The defense won the game with a final score of 10-3. This clip shows Dean’s ability to find the holes in the pass protection to get to the QB untouched for a sack on a key third downplay.

Dean will likely be picked somewhere around picks 9-16 of the first round in the upcoming draft. There are several teams out there who are desperate for a playmaking middle linebacker. The Broncos, Eagles, and Patriots, to name a few. The consensus pick I see on the NFL Mock Draft Database has Dean going 16th to the Eagles. I’m seeing a few having him go as early as ninth to the Broncos, which I’d be happy with, for sure.

I don’t know if Dean will have as dominant a rookie year as this year’s likely DROY, Micah Parsons, but I do believe he will be picked up by a team that will look to get him on the field early and often. He has the leadership and Football IQ to be the defensive play-caller, as the position is more important than people realize.

I’ve seen pro comparisons to players like Kendricks. That’s high praise considering Kendricks was LB6 last year in IDP123 scoring. If I’m counting on one linebacker to make an immediate fantasy impact, it has to be Dean. I’m not going to make the same mistake I made last year and picked a dark horse like Jamin Davis to be the top rookie LB. I am sticking with the best player in the class! Look to draft him either late in the first or early second round in your rookie drafts this year!

Thanks for reading! Let me know your thoughts in the comments, or hit me up on Twitter @IDP_Baumer !