Smokey Monday is a smart and technically sound prospect. Depending on how he times in the 40 yard dash, he could be moved to cornerback. 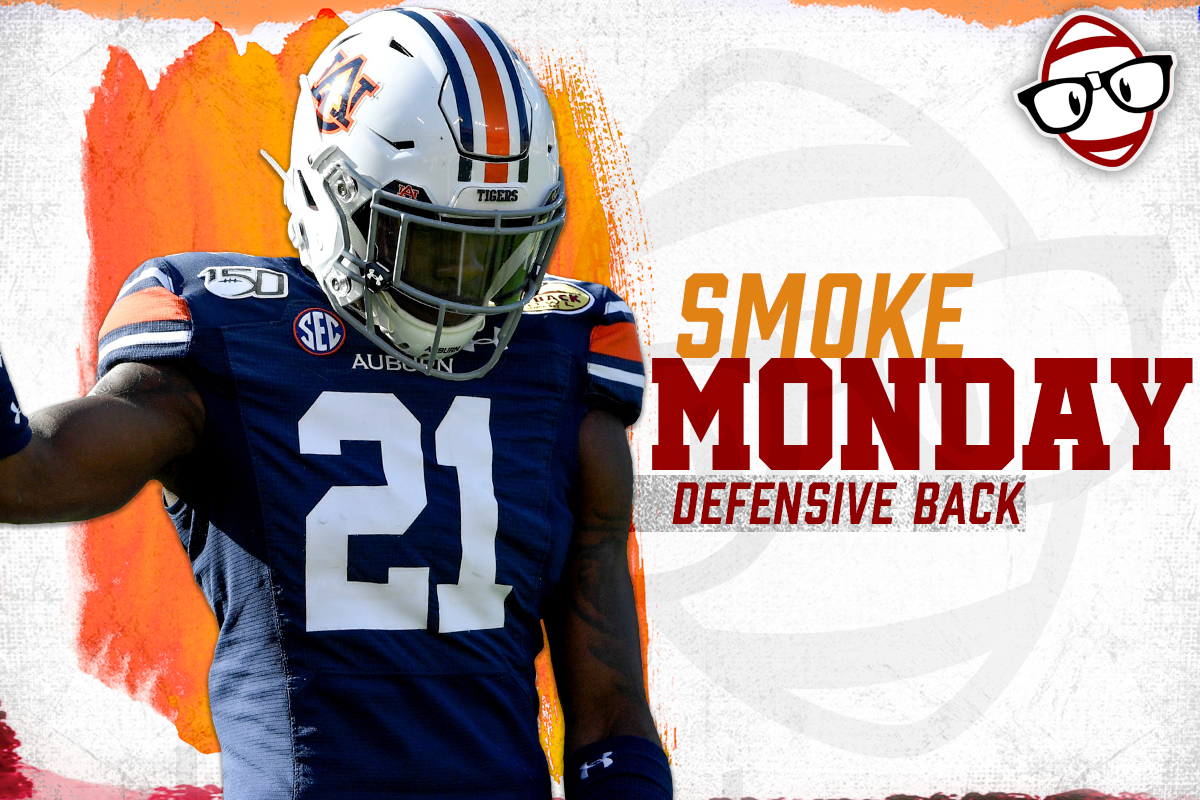 Quindarious “Smoke” Monday, what an enjoyable nickname. At the NFL level, he’s probably solely a strong safety. That’s perhaps his best position, as he likely doesn’t possess enough long speed to play the deep middle of the field. However, a Tampa 2 scheme’s move to cornerback can’t ultimately be ruled out. Monday is a pretty tall safety prospect, which may cause issues for him that we’ll address later. His height will make it difficult for quarterbacks to fit passes over him in tight windows. Smoke Monday also has special teams coverage experience, which is always good for NFL teams to see on tape.

Monday was a 4 – star recruit from Carver Highschool in Atlanta, Georgia. He received offers from Georgia, Florida, Florida State, and more before choosing the Auburn Tigers. He certainly put on a show in the defensive backfield.

Monday played almost an entire season his freshman year but in a reserve role. The experience gained, no doubt, was invaluable to his development. His final two seasons at Auburn showed a strong glimpse of the player he can become at the NFL level.

He had three interceptions returned for touchdowns during his career at Auburn. While that doesn’t exactly make him a playmaker, it does show a nose for the end zone. Monday always seems to be around the football when you watch him on film. That’s a very endearing trait for a player in the secondary.

Ideally, we would like to see Monday keep his head up while making the tackle to protect himself. He properly wraps his arms around the receiver and uses his legs to drive through the player. Instead of going for the big hit, he makes sure to get the receiver on the ground.

Knock-out blows look cool on highlight reels, but the defender’s first responsibility is to get the ball carrier or receiver on the ground. There was zero chance for any YAC on this play.

The Offensive Coordinator calls for a run fake, then a bubble screen on the backside of the play. The offensive lineman fails to reach Monday in time, but that is not his problem. He knifes through the failed block and tackles the ball carrier for a short gain.

Monday makes a picture-perfect tackle on the play here. He immediately comes downhill, leaves the lineman grabbing at the air, and makes the play. You couldn’t draw it up any better.

Here, Monday takes on the blocker, stands him up, and sheds him to make the tackle.

It’s not always about the glory of playing safety in the NFL. You have to be willing to do the dirty work. Often that results in taking on players who may outweigh you by fifty or even a hundred pounds. But that is the job. And Monday does it very well on this play.

Intercepting the ball in the end zone is one of the most crippling plays for an offense. To add insult to injury, Monday makes a house call and scores a touchdown.

The quarterback had no business throwing the ball on this play; a defender was over the top, in addition to the two underneath. Smokey took the ball away and put points on the board for his team.

The potential that Monday may have in an IDP league depends on whether he stays at safety or if he gets moved to corner. A CB is, more often than not, useless in IDP scoring. The point scoring ceiling is high, but the floor is a goose egg. A safety usually has a higher floor, with potentially the same high ceiling. Monday is someone I would target in the fourth round of a rookie draft. You don’t want to spend too high of a draft pick and not be sure what position he’ll play.

There is a lot more to Smoke than a catchy nickname. And while he may not see his name flash across the screen during the NFL draft until Day 3, if he lands in the right system, he may get on the field rather quickly.