D’vonte Price is a little-known RB prospect out of FIU. Find out where he might go in the NFL draft and whether he’s a potential dynasty asset according to @DarthDbacks 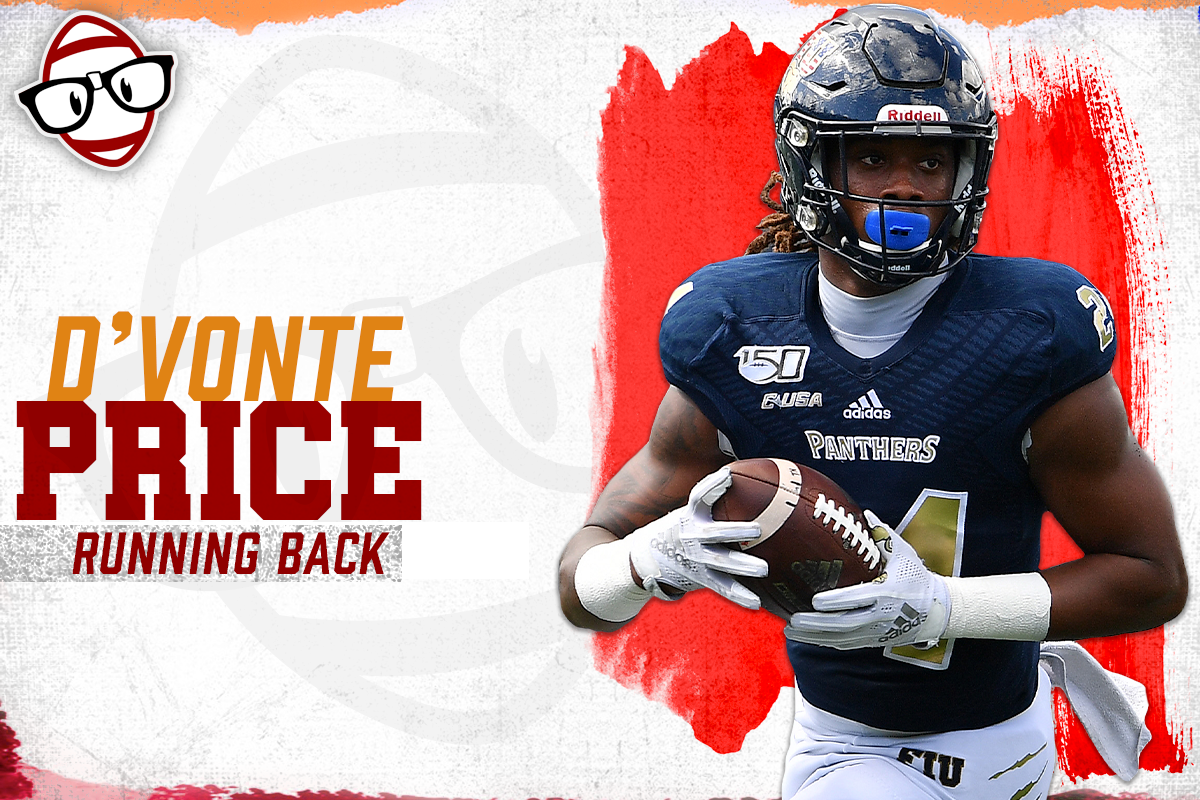 This time out for our rookie profile series, I’m covering the running back out of FIU, D’vonte Price. He’s a great rusher that has bell cow size and speed. I expect him to get drafted in the NFL, most likely in the sixth round. The senior back has excellent size and weight and lit up the NFL combine with a 4.38 40-yard dash time.

Price had a decent season in 2021. He ran the ball 129 times for 682 yards with a 5.3 ypc and six TDs. I think he was in the wrong system since his talents pop on video. He looks way better than his stats say and I think NFL teams will realize that too. Price has the perfect bell-cow size. He seems primed to handle a three-down role. I’ve seen him handle blocking, rushing, and looks to be usable in the passing game. He didn’t have many chances for that, but he does have decent hands.

Due to him being in the wrong rushing system he didn’t display a ton of consistency at FIU. Price would break off massive runs and then struggle for 1-2 yards. However, every time the ball is in his arms, he is a major threat to take it to the end-zone. He has the speed and capability of being a deadly rusher.

As for what I see his future being? I think it’s a long-term backup with the potential to develop into a starter in a few years. I believe Price could be a star if he lands in a scheme like the 49ers that uses zone rushes.

Price does have some issues. He can be too indecisive with the lanes he takes, waiting to find the best hole. This causes him to get tackled at the LOS. However, he is excellent at keeping his feet moving forward despite being an upright rusher. If Price were to lower those pads and run forward, he would make see shades of King Henry. He’s an excellent special teams player and has displayed some decent route-running.

This gives me hope that NFL can give him more coaching and a chance to contribute in that manner. He needs to improve his flexibility, narrow base, and movement through tight holes. If he can do that, he will be a star. If he can’t, he’ll be a worthy hand-cuff to hold on to for big weeks.

In this clip above, Price showcases his strength to keep his gaining yardage while being tackled. He’s pulling defenders with him using his quick feet and driving forward. If only he lowered his pads more often! He has great strength and size to be a hard tackle for a lot of defenders. I can see him being a third and short back quite often in the NFL.

In this fun play above, we see what happens if Price breaks from the line of scrimmage. He has that great burst and speed that allows him to just fly by the oncoming secondary defenders. You can see his one-foot plant burst and how he maintains his balance through the small hole. This is an excellent example of what he can do when he finds his hole and just executes instead of trying to find something better.

Here is another play and another fantastic rush by Price. Here, we see his outside-rushing ability. He bounces it outside and quickly flies past the edge defender. After he gets past him, he does his plant boost and just explodes towards the end-zone. Price nearly gets knocked out of bounds but displays impressive balance to avoid falling/stepping out of bounds. As I said, this kid has the chance to take it to the end zone on every single touch.

In this play, Price shows that he can catch the ball by running a wide-open route to the end zone. It’s an easy play, but you can see players that struggle to catch the ball drop easy passes a ton. However, Price avoids that and holds onto the pass. This is what gives me hope that he can have more of a passing role in the NFL.

While I’ve shown you that Price can catch and rush, what about blocking? As it turns out, he can block. In this play, Price displays an ability to block an oncoming rusher. Furthermore, he holds his ground long enough to allow his QB to get rid of the ball. In all honesty, that’s all I could ask for from my RB.

Finally, I see Price being worthy of a mid-late third-round pick in dynasty rookie drafts. If you need an RB, then take him in the early third. In my opinion, he has the makings of being a future breakout player, but you would have to wait for that for perhaps a couple of years. Of course, Price has to be selected by the right team and system. If he goes to a room that doesn’t have a clear RB1 and uses a zone-rushing scheme, I might take him late second. I believe in his ability, but there’s a risk. However, sometimes you just have to take chances on players. Occasionally, they’ll win you a league.

Give me a follow on Twitter @DarthDbacks. I love to talk football, baseball, movies, shows, Star Wars, Marvel, and of course, to interact with the fantasy football community. For more articles of mine, click here.

2022 Rookie Profile: Tyler Allgeier – Running Back
Rookie Tiers – Why I Use Them And You Should Too 
Black Friday Sale