@darthdbacks has the latest on fast-rising draft prospect RB Pierre Strong Jr. Find out why he thinks that Strong is a must-draft in rookie drafts! This prospect might be worth a mid-2nd? 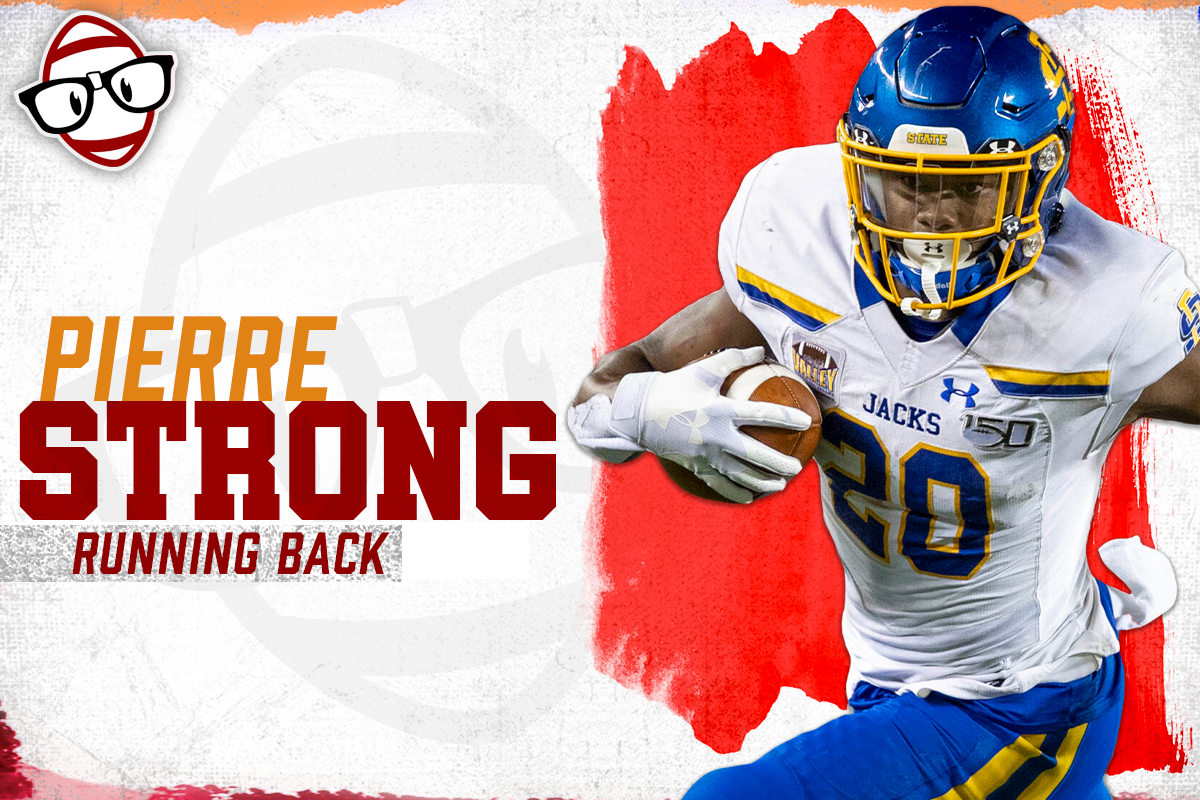 We are deep in the rookie profiles, and this is the latest in the Dynasty Nerds series. I’m covering the running back out of South Dakota State, Pierre Strong Jr. He’s a great rusher that is electric with the ball. I expect him to get drafted in the NFL, most likely in the fourth round. The senior back has great size and weight. Plus, he lit up the NFL combine with a 4.37 40. It was a fantastic showing by the FCS back.

Strong had a great 2021 season and career at SDSU. He gained over 1,800 total yards last season with 22 touchdowns for the Jackrabbits. He was first-team ALL-MVFC. Strong averaged a fantastic 7.0 yards per carry (ypc). He rushed for over 3,000 yards for his entire career and had 514 carries for an average of 6.6 YPC. He averaged a solid 6.8 yards per reception (ypr) as well. For his career, he averaged 8.8 YPR. The explosive back only had 30 runs of 15+ yards last season. Also, if that wasn’t enough, for his college career, he had ten 50+ yard TDs. It qualifies as a threat to take it to the end-zone on every play.

Over his entire college career, Strong had over 30 TDs while playing in only 34 games. His production didn’t drop off during the 2020 covid season when he only had nine games and scored four times. He still managed almost 900 scrimmage yards. That’s pretty good, despite being in the weaker FCS.

Strong is big enough to handle work between the tackles. Plus, if he lands in the right system, he can be a very dangerous one-cut back in a zone run scheme. I would love him going to the right team in which he could quickly become the featured back, maybe within a year even. I see future fantasy stardom potential in Pierre. He has great cuts, a slalom-ability while running, vision, avoiding 1st-level defenders, and can separate from defenders in the passing game.

In the play above, Strong demonstrates how he is accelerating through a hole at one cut. He does an excellent job as we see his vision go straight for the hole. Another thing to look at is his pads. He runs with them forward and towards the ground. This is good to do as it helps him gain additional yardage. You can also see how he pushes off his cut foot to accelerate and gain five yards off the acceleration alone.

In this play, you can see Strong’s short-yardage ability. He knew exactly how far he needed to go and drove for it. He didn’t let the first hit stop him, by pushing through the arm tackle and getting the first. Secondly, we see another excellent cut by him to sneak through the hole that was open.

Here’s a fantastic video of his breakaway ability and explosiveness. We see Strong take it to the house by executing an outside zone run and then cutting inside. He cuts inside to avoid the tackler. That’s all he needed to do as he exploded towards the end-zone. It’s a good showing of his slash ability to slash through arm tackles.

Here’s a video of his toughness. He’s initially hit in the backfield. Instead of just going down, Strong keeps his legs moving and breaks through for additional yardage. Every yard counts in the NFL and in fantasy. You have to love his attitude of refusing to go down.

While there aren’t many examples of him catching a ball, here’s one. Strong shows soft/strong hands by catching it and holding onto it through contact. He survived a brutal hit and held onto the ball. This gives me hope that he will be able to do more receiving work in the NFL. He has the hands for it in my opinion, just needs the opportunity.

In this beautiful run by Strong, we see him bounce it through a hole outside and just accelerate to the end-zone past, everyone. I’m not sure I ever even see him accelerate since he just starts off fast and gets even faster. It’s just another example of his great talent in being able to take the ball on any touch to the house. He read the line great and took advantage of a massive hole.

In this play above, we see how silky smooth Strong is running through the line as if he were a slalom skier. He magnificently avoids being touched by defenders until he’s tackled. Even when he gets hit in the legs, he still manages to gain another couple of yards. This is a great example of what you want to see your NFL back do. You want to see those jump-cuts, slashes, vision, and relentlessness to not gain yardage.

This is an example of Strong’s wildcat and red-zone ability. We see him able to take snaps and drive towards the end-zone. He plants his foot, fires towards the end-zone, and drives with his head down. This ability will be used in the NFL if he proves he can do this even more. I love him.

This is another snapshot of his unique passing ability ala Derrick Henry. On 4th and 1, he takes the shotgun snap through the QB’s legs and throws a perfect pass to a wide-open TE. Having this ability to throw and do special plays will enable Strong to stay on the field for more plays. More time on the field almost always leads to more fantasy points. This play makes me think he has the potential to be a three-down back if he gets better at blocking.

This is just another great play by Strong in which we see his vision, jump cuts, explosiveness, one plant leg, and more all in one play. He slices through an open hole by cutting off one leg, then manipulates his way around the defenders where he can rush big yardage before smartly going out of bounds with under two minutes left. It’s a great play. Strong makes me think of an experienced veteran RB out there.

Of course, if Strong were perfect, he would be a first-round pick. Unfortunately, he isn’t. The biggest issue Strong has is with his blocking. He will throw his entire body at a charging defender, but he is still learning how to block without doing that. If he can improve his blocking with proper NFL coaching, then I see him breaking out 100% in Year 2. Unfortunately, right now, he’s just a two-down back that will mainly be rushing.

As for his receiving work, I see no reason why he can’t get more opportunities to catch the ball. Strong wasn’t given nearly enough at SDSU, and that’s causing him to drop. If he had the same opportunities as some of these other backs, I guarantee he would be higher. As for another negative, he can overthink his reads sometimes. What I’m saying is that he will get too patient. Strong will wait for the best hole to open up, which you can’t do. He needs to learn to be more decisive and trust his eyes. If he does that, I can see him reaching 1,000 yards rushing in the right offense one day. Luckily, he’s durable and there’s no reason to be concerned about injuries.

Strong is an excellent RB, in my opinion. It’s expected that he will be an early-Day 3 pick, most likely in the fourth round. If he’s taken then or any earlier, I’m absolutely taking him in the mid-late second. I’m willing to risk it for him. If he’s there in the third round, you better take him. Otherwise, that’s a miss. I expect a decent rookie year, especially if Strong is in a committee, but I fully expect a break-out by his second year. He should become at least a reliable flex play, if not RB2 within a year or two.

Give me a follow on Twitter @DarthDbacks. I love to talk football, baseball, movies, shows, Star Wars, Marvel, and of course to interact with the fantasy football community. For more articles of mine, click here.