EDGE Aidan Hutchinson is rapidly emerging as a top prospect for the 2022 NFL Draft class. What makes this player so highly coveted by scouts? And what is his potential as an #IDP asset? Nerd out with @Spydes78 as he fills you in on these answers and so much more! 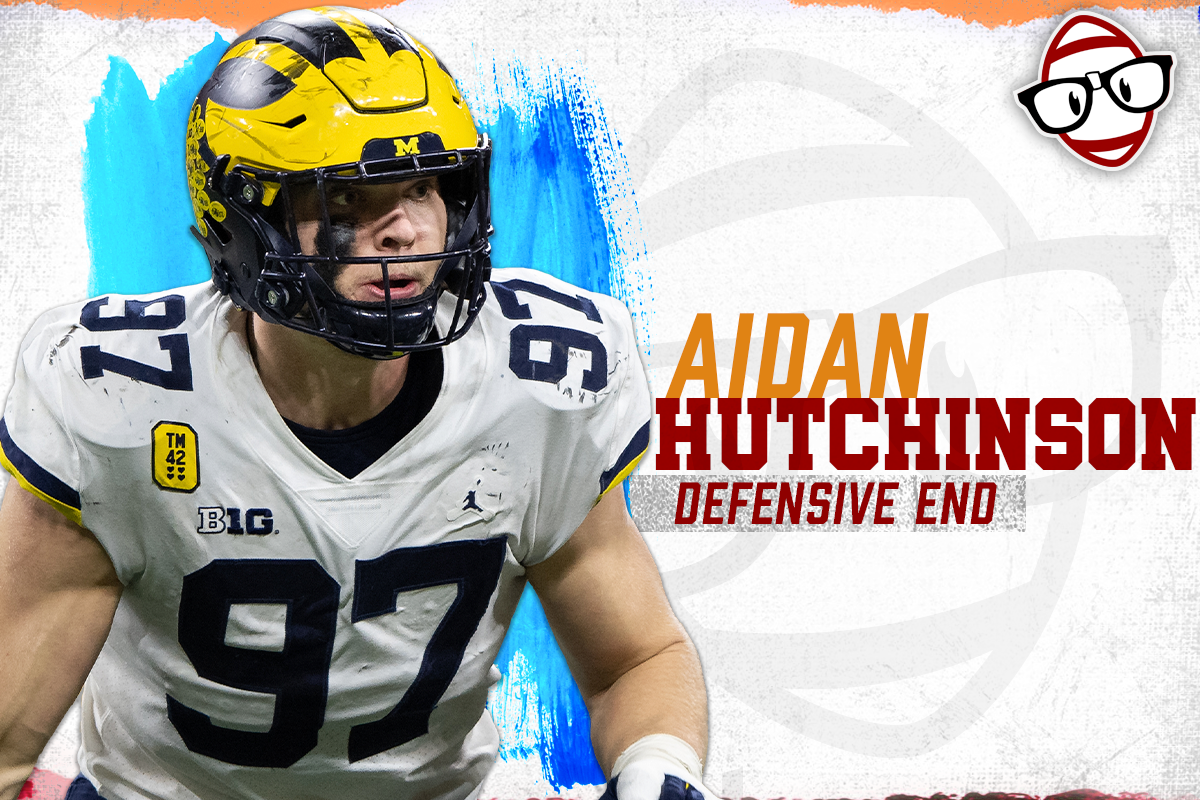 “The measure of a man is what he does with power.“

Welcome, fellow IDP Nerd! Thanks for tuning in for another profile in our ongoing draft prep series. These articles are jam-packed with the scouting goodness that you’ll need to prepare for your upcoming rookie draft(s) adequately.

This installment will showcase standout edge rusher Aidan Hutchinson, from the University of Michigan. If you haven’t guessed from the headlining quote, Hutchinson is an absolute powerhouse prospect, expected by many to be selected in the top 10 of the pending NFL Draft.

But does he have the skills to back up this hype? And, is there any room for improvement for this Wolverine sensation? You’ve come to the right place for these answers and so much more. So sit back and enjoy this comprehensive overview of a truly dynamic IDP prospect.

The first trait that jumps out at you when you watch the film on Hutchinson is his impressive stature. At 6’6″ and 265lbs, he is athletic, long, and immediately recognizable amongst his collegiate peers. In fact, according to a 2013 census of NFL rosters, the average size of a professional defensive end is just 6’4″ and 283lbs. Thus, Hutchinson is lanky and strapping even by NFL standards.

Hutchinson’s build allows him to take long strides and gives him an explosive first step in his pursuit of the quarterback. He often utilizes this trait to circumnavigate the kick-out move of an opposing offensive tackle. This ability is highlighted in the clip below, where he uses his ‘get-off’ to leave the Ohio State tackle in the dust.

His impressive size also affords him the luxury of lining up anywhere across the defensive front. Though capable of rushing the passer from the interior, he was most frequently deployed interchangeably at either end position for the Wolverines.

Many a prospect has approached the NFL with spectacular size, but sometimes they flame out when they are unable to translate that build to their advantage. Aidan Hutchinson is not that guy.

When you study his film, you find a player who converts size to power beautifully. He repeatedly terrorizes offensive protections with a devastating bull rush. As evidence, I present the astonishing clip below in which Hutchinson’s charging bull trucks the Buckeyes’ left tackle. You can watch a lot of football and not see an offensive lineman abused like that, let alone one from a major college program.

Ok, so we’ve established that Hutchinson has the size and the power to win in the trenches. But, does this big man have the stamina to fight until the whistle and keep coming back for more? He does indeed, my friend!

One trait that is sure to impress scouts is Hutchinson’s relentless motor. He is downright tenacious in chasing down quarterbacks. This dogged spirit allowed Aidan to set the Michigan record for sacks in a season with 14 in 2021.

The play below against Washington epitomizes Hutchinson’s hallmark persistence. Watch as he initially exhibits the situational discipline to anchor and play the run. He then abruptly changes gears upon identifying the play-action and uses the aforementioned big step to gain outside pursuit forcing the quarterback to step up in a collapsing pocket. Finally, Hutchinson can power through interior congestion to track down the fleeing signal-caller for a well-earned sack. This sequence is a clinic in intelligent, steadfast pursuit and is sure to have pro scouts salivating the prospect of Hutchinson in their defensive front.

WHAT SHOULD CONCERN YOU?

It’s hard to fault Hutchinson for becoming partial to his size/power combination. College opponents have repeatedly failed to neutralize these traits, allowing Hutchinson to thrive as a pass rusher. However, life will not likely be so simple at the next level.

Though the bull rush has provided in abundance, Hutchinson will need to hone an entire catalog of pass rush techniques to maximize his potential as a pro. Coaches will undoubtedly emphasize the importance of effective hand usage, which could elevate Aidan’s game to another level.

Official measurables are not yet available, so this point is merely speculative. However, rumors have persisted about less than ideal arm length for Hutchinson. In a recent mock draft for Pro Football Network, analyst Ian Cummings speculated that sub-33″ arms could cause Hutchinson to fall as low as the 8th overall selection in the NFL Draft. The short wingspan is a significant concern for trench defenders because it often allows long-armed offensive linemen to gain a significant leverage advantage. Thus, this particular attribute will be influential for Hutchinson and may affect how highly the NFL covets him.

I realize that billing as a Bosa brother means big shoes to fill. However, I see many similarities between Aidan Hutchinson and Nick Bosa as a college prospect. Incidentally, not all of these parallels are necessarily positive. Here are two examples:

Both Hutchinson and Bosa use explosive power to shed blockers and disrupt backfields. Below, you’ll find an example of Hutchinson pinballing through blockers en route to corralling the Iowa quarterback for a sack. Compare this play to the one which follows in which Bosa plows through USC’s protections in a remarkably similar assault on the passer. Both players utilize the same menacing ‘bull in a China shop’ style to disrupt the opponent.

A lack of bend is not uncommon for longer, rangy pass rushers. The physical reality is that excessive height limits a player’s flexibility. At 6’6″ and 6’4″, respectively, Hutchinson and Bosa are no exception to this rule. When you watch their college film, both players struggle to dip their inside shoulders during an outside rush. To compensate, these players often resort to windmilling their outside arm to maintain balance. This swinging arm is a trademark to both players and directly attributed to their stiff hips. (See below)  This stiffness has not limited the effectiveness of these players, as the productivity speaks for itself. However, it is a common trait amongst these athletes that bears mentioning.

There are many bridges yet to cross for prospects and evaluators alike in the lead-up to the draft. Pro days and a return to a more conventional NFL Scouting Combine mean that there will be ample opportunities for player stocks to rise and fall. However, if Aidan Hutchinson can back up his top-notch potential with solid interviews and high-end measurables, he may not spend much time in the Green Room on draft night.

So what does that mean for his dynasty value? Well, if Hutchinson does indeed receive top-ten draft capital from the NFL, that will tell you that teams feel pretty strongly about both his character and ability. The intangibles are typically the toughest for fantasy players to establish, and thus it’s wise to let the league be your guide on these matters. As a top-ten draftee, though, I would be eminently comfortable selecting Hutchinson in the 16-24 range of a rookie draft (middle to the back end of the second in a 12-team league).

Second-round rookie capital may seem excessive for a defensive player. However, I feel this player is worth the investment. Firstly, my initial impressions are that the overall offensive draft class is somewhat talent-depleted in 2022. Next, you need to consider that Hutchinson averaged nearly 4.5 tackles per game in his senior season. Hence, his play makes him slightly insulated from the standard boom-or-bust nature of splash-play-dependent pass rushers. Lastly, if the comparison to Bosa holds, I’d argue that, retrospectively, any of us would be more than happy to part with a mid to late second for that type of impact player.

I hope you enjoyed this scouting report on one of the offseason’s most compelling prospects. Aidan Hutchinson brings a spectacularly imposing presence and is a player that should be on your wish list come draft time.

I thoroughly enjoyed bringing you this piece, and would love to continue the conversation on Aidan Hutchinson. Please feel free to comment below or contact me @Spydes78 on Twitter. And also, stay tuned to @DynastyNerds for a steady pipeline of content from our eminently qualified staff to carry you through your offseason. If you like what you read, please consider becoming a subscriber to any of the elite tools that Dynasty Nerds has to offer. Make sure to use the promo code “SPYDES” to receive a 15% discount. Thanks for reading, and enjoy the grind!