2022 Draft sleeper Alec Pierce is burning his way up draftboards. Should he land on your fantasy squad? 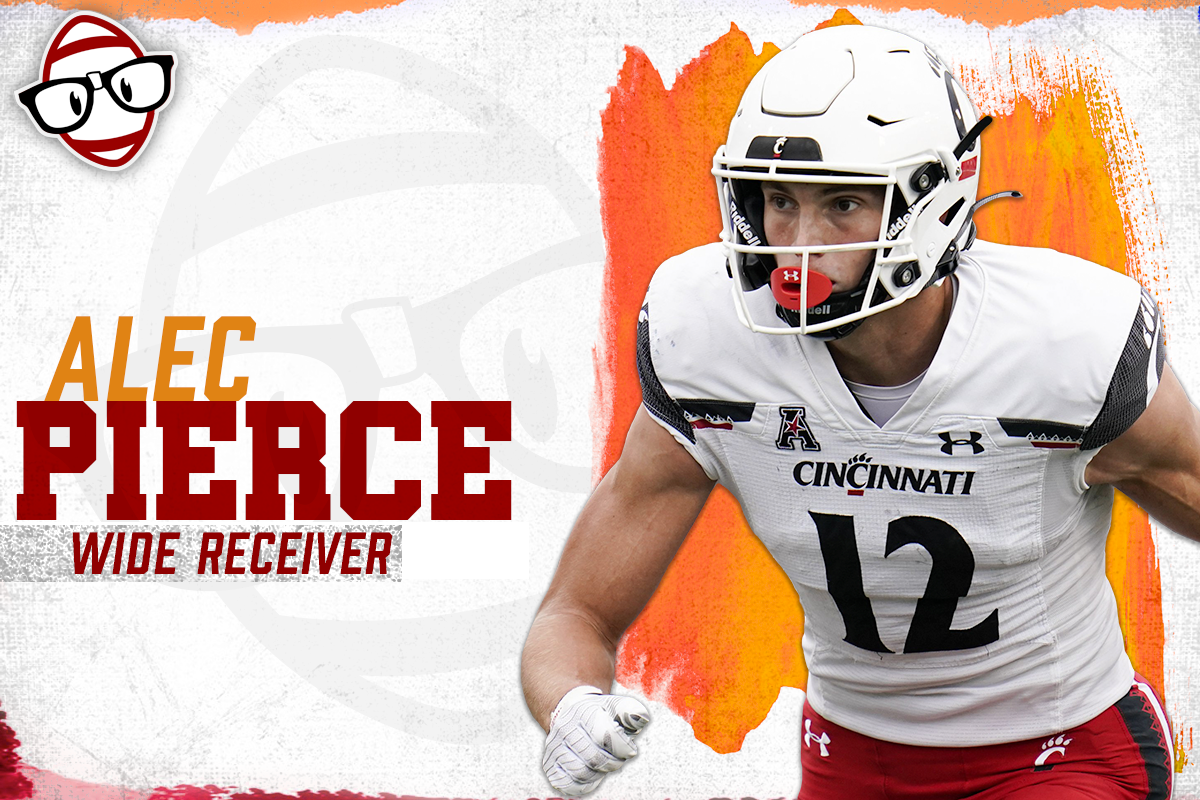 One of the fastest risers at the WR position this spring has been Cincinnati’s Alec Pierce. Pierce has size, speed, and skills, and he showed it all off first at the Senior Bowl and again at the Combine.

Let’s take a look and see what he’s going to bring to the NFL (and your dynasty squad) this fall!

Pierce came out of Glenbard West High School in Illinois as part of the 2018 class and committed to Cincinnati. He played mostly special teams as a freshman before breaking out as a true sophomore, catching 37 balls for 652 yards and 2 TDs.

Pierce’s counting stats aren’t going to impress, but this is the kind of situation for which metrics like Dominator Rating / College Dominator were made. Pierce’s true sophomore season- his first seeing real offensive involvement- he hit a 20% breakout for Market Share REC Yards, though with standard DOM (which includes TDs) he is a year-four breakout with 0.26% of the Bearcat’s receiving offense.

His REC Yards per Team Pass Attempt (RYPTPA) of 2.36 is a good enough number, sandwiched between the likes of Higgins and Pittman at 2.5+ and Amon-Ra St. Brown at 2.03.

My Composite Production Index (CPI) which assigns a simple numerical score to a prospect’s production history marks Pierce at 3.09. This puts him in the territory of mostly depth types like Dax Milne and Kirk Merritt.

One particularly nice data point is his Yards per REC of 17.6. This is more a marker of his role than a measure of talent, but it does mark him as an effective downfield threat, something NFL teams all want and need.

As much as his production profile underwhelms, his athletic profile is downright exciting. At the combine, Pierce posted a blazing 4.33 40 at 211 lbs for a 96th percentile Speed Score. He also posted ridiculous numbers in the Vertical and Broad (40,5″, 129″) adding up to a 133.4 (94th%) Burst Score, and nice numbers in the 3-cone and shuttle as well (for his size). His Relative Athletic Score of 9.8 is nearly perfect, giving him a comp (as an athlete, not a prospect) of Calvin Johnson.

I hadn’t watched any Pierce before this film session and I wasn’t sure what to expect. I’ve come away impressed at some of his traits- he can’t do everything, but there are a few things that he does very well and that may be enough.

In the clip above, Pierce not only smokes the DB (the top DB from Notre Dame, so probably an NFL player) but he does an awesome job coming back and over the top to snag this underthrown ball. Pierce has flawless hands, great ball tracking, and excellent contested ability that complement his pure speed.

He also has some nice releases, and often shows off his explosiveness in the short game:

He doesn’t get the ball in this one but he had certainly won his route and could have scored.

Pierce is more than just a deep threat, as he shows again here.

For his size, Pierce has some nice stopping / change of direction ability, often showing off skilled footwork. He combines this with an eye for the soft spot in the zone and good extension / attack of the football. His ability to win against zone will expand his utility at the next level.

This next clip shows him putting this all together:

Pierce ran this route at least twice in this game, and both times he won it handily, splitting the zones for a huge gain. His speed creates cushion, his deceleration creates separation, and his timing is synched up perfectly with Ridder. I do wish he just turned upfield instead of running sideways.

Here’s a great 9 route from him, one of his specialties:

While he doesn’t have a big bag of releases, he does this one very well, exploding and using the chop to blow by this corner. He creates a ton of separation with his speed and again adjusts perfectly to the ball and goes up over two guys to get it.

You don’t see a lot of these big lanky guys that also have his start / stop ability and feel for the zone. He’s tough too- he knows he’s getting blasted here but hangs on.
Here’s another nice go:

It’s nearly identical to the other go above but hey, it works. It’s a perfect rep. It will work in the NFL as well.

One more rep here, and it’s another zone beater:

There are some negatives for Pierce as well. As I said, his release package isn’t very diverse, and that one move isn’t going to consistently win in the NFL.

Another issue I have is that he plays smaller than his size. For a big, strong dude, he gets pushed around quite a bit. The DB destroys him on this fade here, and I saw quite a few reps like this.

As I said above, I didn’t have much of an opinion on Pierce going into this piece. Typically, I’m fading the big fast guy that didn’t produce in college- I’ve seen that movie before, and it doesn’t really work out too frequently.

But- Pierce did produce, relative to his team’s offense, though it wasn’t enough to make a blip in my CPI. Still, he played- and succeeded- against tough Ds and NFL caliber corners.

Most importantly, I didn’t find the one-trick pony that I expected. Pierce’s ability to stretch the field but also beat zone and work in the quick game means that he can benefit an NFL offense in a multitude of ways.

Whereas I had Pierce as a day 3 guy- that would maybe be overdrafted for his speed, a la Alex Schwartz, etc- I think he belongs in the round 3 / early round 4 conversations at this point.

It seems like mock drafters and pundits agree, as Grinding the Mocks now has him with an EDP of 69, safely in the 3rd.

In the most recent rookie draft I did (mind you, I’m writing this in March) Pierce went in the middle of the 3rd. Typically I’m hammering running backs at that point but I can definitely make an argument that he’s worth a selection there. I’m not taking him over any guys that combine good film with a solid analytical profile, but, once that group is off the board, Pierce may be a worthy selection.

He’s certainly not looking like a wr1/wr2 type but rather a role player who can provide some boom games (probably a fantasy wr4+) but in deep dynasty leagues that’s still useful production.

That’s it for this one. If you’re not already a member, sign up for any of the Nerd Herd with this link to save 15% off: https://www.dynastynerds.com/ref/ebkortz/